The Irish position on the backstop 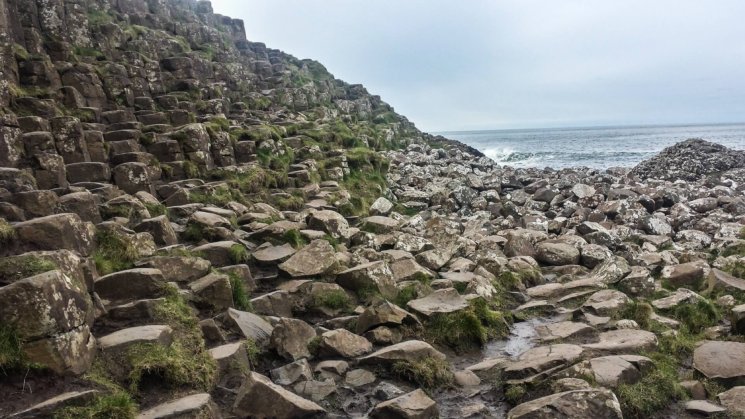 The backstop has become a ubiquitous part of the Brexit glossary. It has been described as ‘anti-democratic’ by Boris Johnson, as a ‘red herring’ by DUP MP Sammy Wilson and as a ‘phantom problem’ by Jacob Rees-Mogg.

There are, of course, two sides to every border. And it’s important to understand what Irish interests are in forming their position on the backstop to get the full picture.

The Irish insistence on the backstop has been criticised in the UK for being paradoxical. The backstop is a means to avoid a hard border—infrastructure and checks—between Northern Ireland and the Republic.

Yet, the argument goes, the Irish insistence on a backstop could easily bring about no deal, which could in turn lead to a hard border anyway.

No deal would cause substantial economic harm, not to mention its political and social impacts, in Ireland so wouldn’t it make sense for the Irish to relent on the backstop to ensure no deal is avoided?

Several things can be misunderstood about the Irish perspective.

Firstly, the backstop is not an Irish-only creation. It was negotiated with the UK, but also importantly with the input of the other 26 member states of the EU.

An important part of its purpose is to protect the integrity of the EU single market—as well as North-South co-operation, the all-island economy and the Good Friday Agreement—ensuring that unsafe or sub-standard goods do not enter the EU.

It is a common responsibility of all member states to ensure this integrity is upheld.

Therefore, it is not within the powers of the Irish government alone to negotiate away these protections, even if it wanted to. Any derogations from single market rules require common approval.

The backstop is protection not just for Ireland but the EU27 as a whole.

Secondly, the Irish government’s perspective is that there is no substantive difference between a Withdrawal Agreement without a backstop and no deal.

During Boris Johnson’s recent visit to Dublin, Irish prime minister Leo Varadkar said, “No backstop is no deal for us.”

A backstop-less Withdrawal Agreement may temporarily defer issues of border management, until the end of the transition period, currently scheduled to the end of 2020, but they would remain unresolved.

The same applies to a time-limited backstop.

In other words, the choice between a backstop-less Withdrawal Agreement and no deal is seen as no choice at all.

Both would very soon lead to a hard border, with added economic disruption in a no deal scenario. As bad as the second scenario may be, it doesn’t make the former any more acceptable.

The Irish government is aware that its negotiating position is stronger now than it would be at the end of a transition period.

By then, negotiations would have begun in earnest over the future relationship. The UK would have largely got its desire, to move on to second phase talks.

Kicking up a fuss would risk several years of effort and resources on both sides. For many member states, their primary concerns, on the likes of security, haven’t begun to be addressed in the withdrawal phase.

An Irish veto later on that risked such an agreement would receive much greater pushback internally among other member states.

There’s also an awareness about how no deal could play out politically.

If the Irish government signed up to a Withdrawal Agreement without a backstop and no deal transpired further down the line, they could be blamed domestically for signing up to an agreement that left no deal—and thus a hard border—as a possibility.

Thirdly, the border is seen as an existential issue for Ireland, i.e. one that threatens the continuance of the relative peace that has persisted following the Good Friday Agreement across the whole island.

This threat has been much less central to the debate in GB. Of course, the border is an existential issue for the UK as well.

Theresa May’s former chief of staff Gavin Barwell said recently that her eventual opposition to no deal was motivated precisely by concerns about the integrity of the UK in such a scenario.

Fourthly, although the bilateral relationship with the UK is undoubtedly an important one, Ireland’s top priorities are its relationships with the other 26 EU member states.

As demonstrated during the Brexit process, Ireland’s influence has been amplified within the EU. It’s worth remembering as well that the UK and Ireland are on opposite trajectories as far as the EU is concerned.

There is widespread domestic support for Ireland’s membership of the EU, both among the public and politicians.

Furthermore, the relationship with the UK has been damaged by the Brexit process. And this would only worsen in the event of no deal.

The London and Dublin governments would take contrary positions if the UK, as many expect, implemented direct rule in Northern Ireland.

Economically, too, Irish priorities are tilted towards Brussels, and even Washington.

As the chart below shows, the UK is an important trade partner, but much less so overall than both the EU27 and the US. 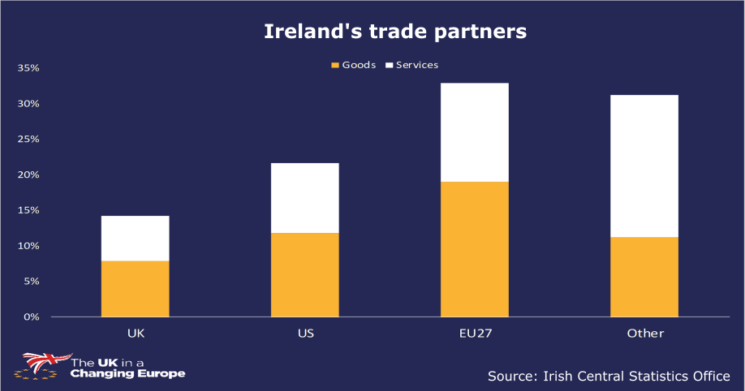 Irish concerns about the intentions of the UK government—part of the reason why the backstop is seen as necessary—have been heightened further in recent weeks.

From their perspective, the UK appears to be negotiating in bad faith by demanding the backstop now be scrapped altogether, after having jointly agreed its terms.

The UK has also been seen as reneging on its previous commitments in the December Joint Report to avoid all checks and infrastructure at the border.

Finally, its laissez faire plans to manage the border in the event of no deal appear, from the Irish perspective, to show little regard for the UK’s joint responsibility to ensure continued peace and stability.

The upshot is that Ireland has little alternative but to stick to its position on the Withdrawal Agreement, with the backstop in it.

Even if it wanted to, it is not obvious that Ireland has the ability to get rid of the backstop unilaterally anyway.

To do so would be to give in to the inevitability of border disruption, and the myriad social, political and economic implications that would entail.

Ireland’s priorities and loyalty will inevitably continue to be above all towards its fellow EU member states, with whom it shares a common future.

Finally, the conduct of the UK government has done little to ease concerns about the need for the backstop in the first place, on the contrary.

By Matthew Bevington, researcher at the UK in a Changing Europe.