Joël Reland explains why Boris Johnson’s remoulding of the Conservative Party into the party of Brexit has damaged its relationship with business.

What have been the big issues during Johnson’s premiership?

The Conservative Party has long regarded itself as the party of business, yet Boris Johnson’s Conservatives were first and foremost the party of Brexit – much to the detriment of relations with the business community. Engagement over Covid-19 – the other defining issue of the Johnson years – went some way to offsetting the damage to business relations.

There is a long history of animosity between the Leave campaign and business groups. Campaigners – including Johnson – repeatedly condemned their warnings about the economic costs of Brexit as ‘project fear’ and campaign literature even called big business ‘the enemy of the public interest’.

Perhaps unsurprisingly then, insiders say Johnson’s administration quickly froze the CBI out of meetings, as Brexit became an issue on which businesses were expected to follow rather than lead.

First was the demand to drop everything to prepare for no deal. Then, once the Withdrawal Agreement was signed, Johnson’s government pursued a Trade and Cooperation Agreement (TCA) which steadfastly prioritised sovereignty over business interests. The sort of alignment on goods standards proposed by Theresa May was ruled out, with then-Chancellor Sajid Javid stating bluntly that there would be an impact on business ‘one way or another’.

While the UK ultimately negotiated tariff-free trade with the EU, businesses had emphasised that it was non-tariff barriers (diverging rules which increase bureaucracy) which mattered most to them. Yet these concerns were ignored from the outset of negotiations, with chief Brexit negotiator David Frost calling them ‘exaggerated’.

The contempt the Johnson regime appeared to hold for the business community was encapsulated in his ‘fuck business’ comment as Foreign Secretary, and infamous speech at last year’s CBI conference, where he repeatedly lost his place, made extended reference to Peppa Pig World, and imitated a car.

Relations over Covid-19 were contrastingly good, though tellingly business engagement focused primarily upon the Treasury. The Chancellor reacted fast with the furlough scheme to keep many businesses from going bust, even consulting with business groups and trade unions on its design. Whereas 58% of businesses felt not listened to by government about Brexit, this fell to only 20% in the context of Covid-19. 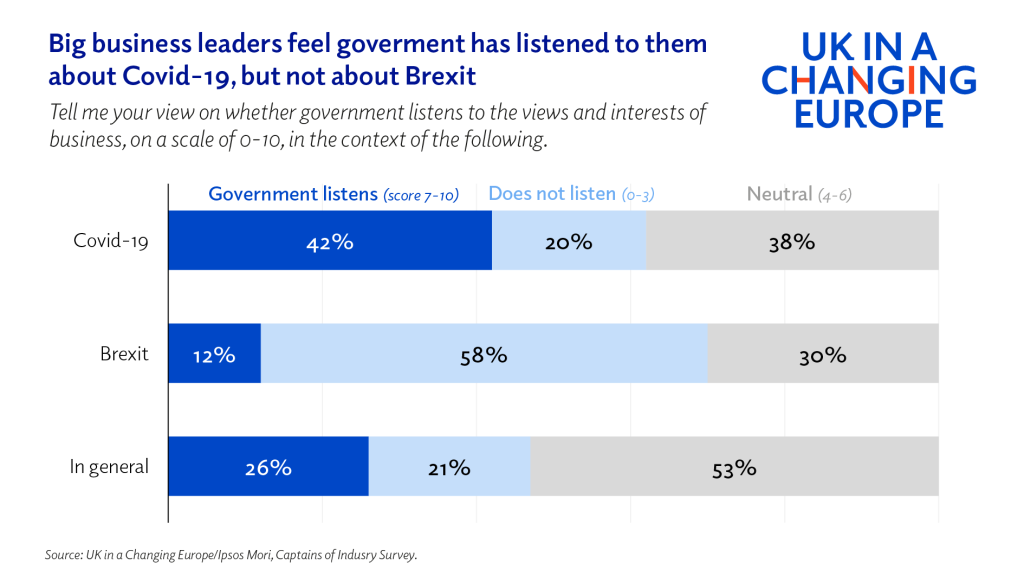 What changed during his premiership?

Government has at times appeared interventionist, and at others laissez-faire in its attitude to business. Business relations have been defined by aloofness and ambiguity.

Corporation tax will rise from 19% to 25% next April, and in spring the Chancellor announced a 25% windfall tax on energy companies in response to surging profits. Yet simultaneously BEIS has replaced Theresa May’s more interventionist ‘Industrial Strategy’ with a ‘Growth Strategy’ containing less-defined measures for supporting industry to face future challenges.

Similarly, on Brexit government has done little to help businesses manage the new bureaucracy – export declarations, border checks – created by the TCA. Business investment has flatlined, and UK trade fell by 6.2% as a share of GDP between 2017 and 2021. A large drop in the number of UK-EU trading relationships reflects that, while big businesses can afford to shoulder these administrative costs, many smaller ones are pulling out of the EU market, harming their long-term growth prospects.

The new points-based immigration system has led to a boom in skilled and student visas, which could benefit industries like IT. However sectors which were previously highly dependent on EU workers – hospitality, manufacturing – have experienced some of the biggest labour shortages since the end of the pandemic. Temporary visa schemes have had limited effect, with government instead telling business it needs to end its ‘addiction’ to cheap foreign labour.

New global trade deals were meant to offset reduced access to the EU market, but the deals struck with Australia and New Zealand are expected to add just 0.1% to UK GDP annually. Moreover, farming groups say they have been used as a ‘pawn’ in deals which will expose them to increased competition, as import quotas on beef, sheep meat and cheese will eventually be removed entirely.

Much has been made of the ‘Brexit opportunities’ agenda of rewriting retained EU law to better suit UK economic interests. Yet there are numerous cases where government has proceeded with diverging from EU regulations (such as on chemicals and manufacturing marks) despite the bureaucratic costs of adaptation for business seeming to outweigh any potential gains.

On trade and regulation, being seen to deliver quick Brexit wins appears more important than listening to concerns of businesses, who prioritise certainty and stability. Nowhere is this more apparent than in the plan to ‘sunset’ over 2,000 pieces of EU legislation by 2026, despite the huge disruption this would create.

Johnson’s two main legacies are his sovereigntist Brexit agenda and higher taxation. The former will undoubtedly be continued by his successor; the latter is less certain.

The likely next Prime Minister Liz Truss has ruled out future windfall taxes on energy companies and promised to cancel the planned increases in corporation tax and national insurance – from which both big business and the self-employed stand to gain.

Yet average energy bills are expected to rise 82% in October and 116% by January, potentially leaving two thirds of households in fuel poverty. Can the next Prime Minister really leave the bumper, war-induced gains of energy producers – or indeed the shareholder dividends of water companies whose inefficiencies have undermined the UK drought response – untouched in such a context?

Meanwhile, both candidates have promised to pursue Brexit opportunities and are locked in an arms race over who can bring furthest forward the deadline for sunsetting EU regulations. This will only amplify the pressure on businesses to adapt to a range of changes at very short notice, obliterating any hopes of longer-term planning. Nor is there much hope of working with the EU to smooth wrinkles out of the TCA, given Truss’s promise to continue with the Northern Ireland Protocol Bill.

This underlines how central Johnson has made Brexit to the Conservative Party’s identity. It remains the single biggest obstacle to rebuilding relations with business.

This piece is part of a new series assessing Boris Johnson’s legacy as Prime Minister.