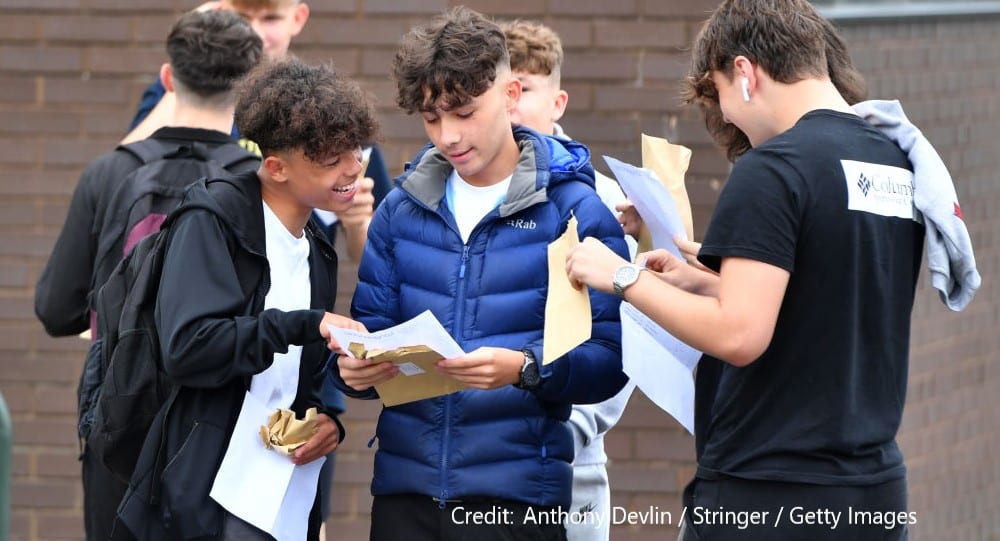 Andrew Eyles explains that while the government’s goals in education policy have been ambitious and are to be applauded, the policies in place fall short of the targets set out as part of the broader levelling up agenda.

Education policy may have taken a backseat amongst the clamour to deliver Brexit and cope with a worldwide pandemic, but the middling performance of the education system should remain a first order cause for concern.

The UK’s performance amongst OECD countries in numeracy and literacy is average, but this hides deeper problems within the education sector. In the year prior to Johnson taking office, one in four children left primary school failing to meet the expected standard in reading. The fraction failing to meet the standard in maths was almost identical.

The cost of such failure is very real for the UK economy. Skills beget skills in education. Pupils unable to read or write properly at age 11 are at risk of leaving education without the necessary skills to succeed in the labour market. In 2018 alone, illiteracy is estimated to have cost the UK economy £80 billion.

The UK’s weak performance in education puts us in a distressingly unique position. In almost all OECD countries, the skills of 16-24 year olds exceed those of older cohorts; however, in England 55- to 65-year-olds performance in literacy is roughly the same as the performance of young people.

Against this backdrop, the Covid-19 pandemic caused extended periods of school closure. Since March 2020, the majority of pupils have missed around 100 days of schooling.

The evidence that has emerged suggests that learning losses, particularly for disadvantaged pupils, are large and that the problems that exist in UK education have been exacerbated by these extended periods of school closure.

The shift to remote learning and a lack of resources for less affluent pupils has meant that the challenges facing the current and future governments are as stark as ever.

What has changed during his premiership?

The previous 10 years have seen sizeable changes in the education sector. The two main policy changes have been the widespread adoption of the academy school model and real term falls in education spending. The graphs below show the rise of academy schools alongside per-pupil spending (in real terms) at both the primary and secondary level.

As can be seen from the first figure, academies are now the predominant school type in England, educating around 60% of the nation’s pupils.

Boris Johnson may not have shown the same zeal for academisation as his predecessors, but it remains a key part of Conservative education policy. Academies play a key role in the government’s long-term levelling up agenda and the aim is still for all schools to gain academy status by 2030. 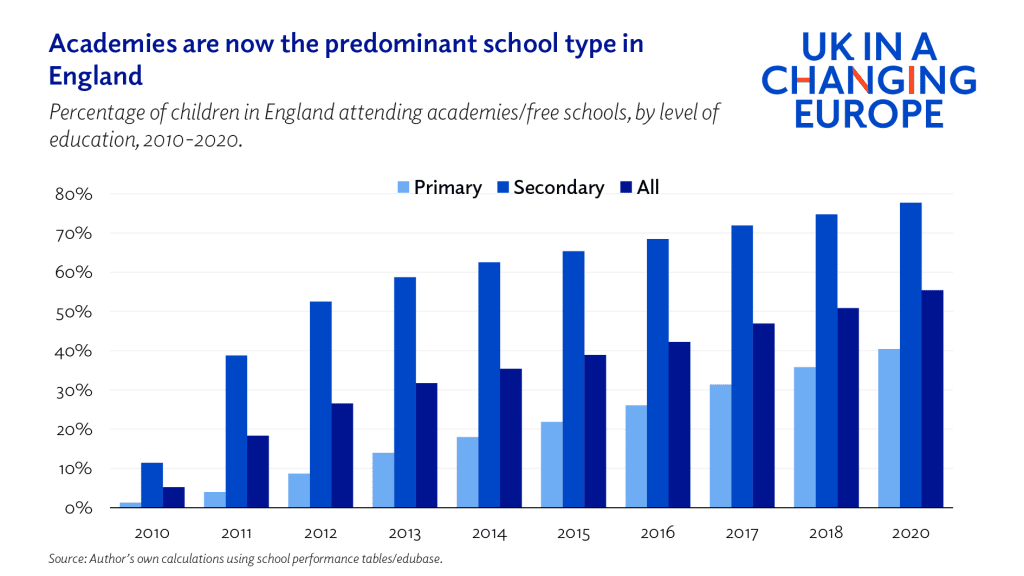 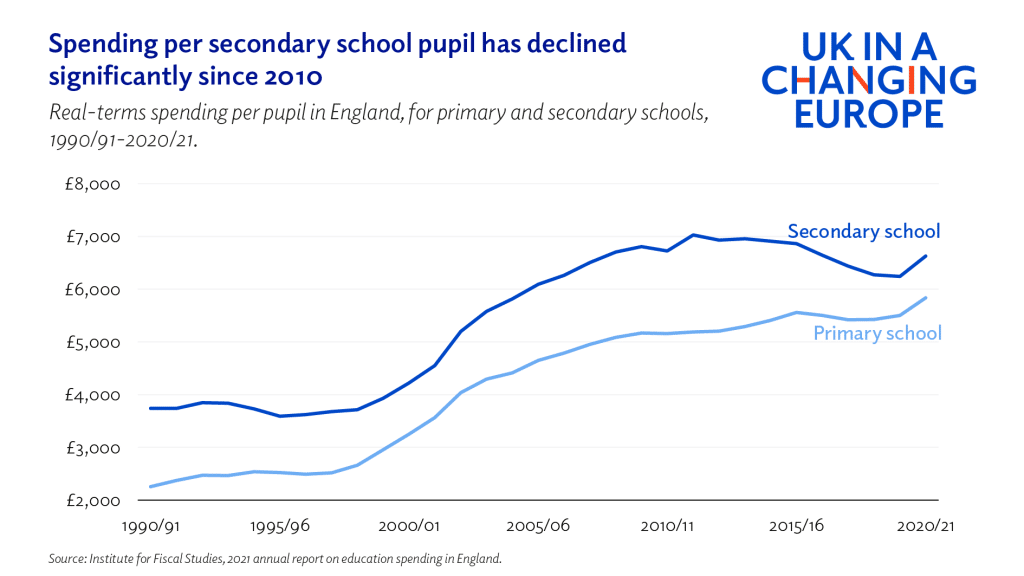 To target the most disadvantaged pupils, the Department for Education has announced plans to support the best performing multi academy trusts in expanding into areas where attainment is weakest. This will be coupled with higher starting salaries and additional retention payments to stem ongoing teacher supply problems in certain parts of the UK. Whether this will be enough to make teaching an attractive proposition as wages rise for the most skilled workers remains to be seen.

Given the large regional and socioeconomic disparities in attainment it is hard to imagine that academisation alone can achieve the ambitious plans set out by the government in the levelling up white paper.

Where Johnson has departed somewhat from his predecessors is in education spending. The second figure highlights that at least for secondary schools, per-pupil spending has declined precipitously since 2010. Between 2009/10 and 2018/19 real term spending declined by 8%. Even for primary aged pupils, spending rose by 5% over the same period. This contrasts sharply with the staggering 70% increase in primary aged funding between 1999/00 and 2008/09.

The government has shown a desire to reverse this trend. Alongside an uptick in expenditure due to Covid, spending reviews in both 2019 and 2021 promised greater funding for schools with the latter review projected to take schools funding back to 2009/10 levels.

However, with record inflation eating into school’s purchasing power, it now seems unlikely that the projected spend will allow schools to recoup the previous decades losses.

If we take the best evidence on the effect of school spending on attainment, the government’s aims to bring 90% of children up to the expected standard in reading, writing, and math will require double the increase in per pupil spending promised in the 2021 spending review even if – incredulously –  we ignore record inflation.

Boris Johnson’s tenure may have been defined by Brexit and the Covid-19 pandemic, but it would be a mistake to understate how important his education policies will be in shaping the coming decades.

Covid has not opened a new educational chasm between the haves and have nots but it has significantly widened it. The plans in place to level up the outcomes of the nation’s children are inadequate as things stand. Academy schools and multi academy trusts have had a decade to prove transformational and have not done so. While the model works for some, there is little evidence for greater autonomy being a tide that lifts all boats.

Similarly, while a greater emphasis on schools spending is welcome following a decade of cuts, the numbers in place are not sufficient to meet the worthy educational goals set out in the levelling up white paper. This was underlined by Boris Johnson’s own education czar who resigned after describing the government’s catch up funding offer as displaying an ‘undervaluation of the importance of education’.

Truly levelling up education will require a mix of greater resources, greater ingenuity in policymaking, and greater emphasis on preventing those most affected by Covid from falling further behind.

Finding a workable and scalable model for the National Tutoring Program would be a good start. Small group tutoring of disadvantaged children is one avenue where evidence suggests high returns are possible.

Given the primacy of effective teachers in shaping educational outcomes, policies aimed at recruitment and, just as importantly, the retention of teachers are paramount.

By Andrew Eyles, research economist in the Education and Skills program at the Centre for Economic Performance, and PhD (Economics) student at University College London.

This piece is the third blog in a series assessing Boris Johnson’s legacy as Prime Minister.