The Labour leadership race and Brexit 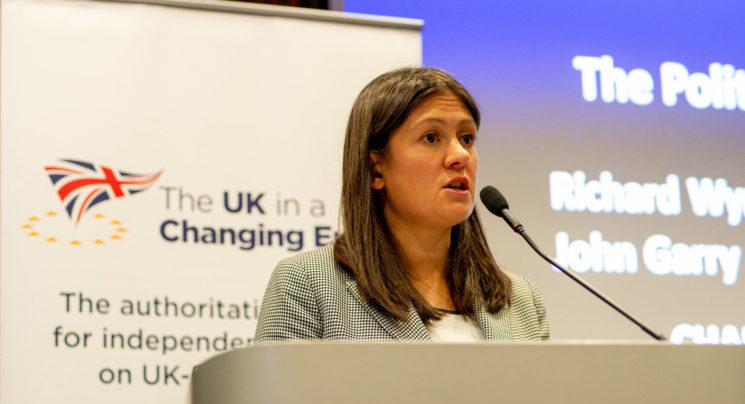 In January, Boris Johnson will once again tell every journalist and every person who happens to be watching the news that it’s the month to ‘get Brexit done’. It will also be the month when Labour MPs are seeking nominations for the party leadership race from fellow politicians, constituency Labour parties (CLPs) and affiliates, including the trade unions.

How will Brexit interact with Labour’s leadership contest? The ‘Brexit record’ of candidates, and their position on the Johnson trade talks will feature, though both are currently understated in the ‘runners and riders’ discussion.

This makes sense right now, as Labour MPs and activists debate the ‘Brexit’ effect and Labour’s losses. Yet come 31 January, when the media mark ‘Brexit day’, a large chunk of the Labour Party will likely have feelings of despair once more.

Labour’s membership is pro-European, will remain pro-European, and will be looking for leadership on where next for Labour’s internationalist agenda.

Enter the candidates. Most will likely maintain the line that Boris Johnson’s deal should be put to a referendum – though of course, this is lost. And by the time Labour’s next leader takes up their post, Britain will more than likely have left the EU.

More important are questions about the future. As well as credible, non-stop opposition to a ‘bad’ Johnson Brexit, what should Labour’s position be on a trade deal?

Should a trade deal be subject to a new renewed referendum campaign?

Should Labour consistently argue for a Norway ‘option’, accepting Brexit will happen but prioritising an exit which minimises economic damage?

Should Labour campaign for an extended transition, in light of the expected complexity of the negotiations and Johnson’s decision to create another new date that ‘must be met’?

These are the questions that will be asked in the context of Labour having been perceived as unclear, muddled and then – in the end – undecided on Brexit.

And what about the ‘Brexit records’ of the candidates currently being talked about? The early favourite, and backed by many Jeremy Corbyn supporters, is Rebecca Long-Bailey.

The Salford and Eccles MP has described her own ‘journey’ from being opposed to a second referendum to being convinced there was no other option but to hold one.

Will Long-Bailey defend Labour’s election position, noting that any sudden swerve towards either Leave or Remain would have lost different seats in different places?

Long-Bailey may well have an interest in trying to be discursive on the future, and to focus more on Corbynism as an economic programme, in particular the ‘Green New Deal’ element. But it may be uncomfortable.

The Wigan MP Lisa Nandy also wants to run. Nandy will likely be the only leadership candidate who voted in favour of Boris Johnson’s Withdrawal Agreement Bill in the second reading prior to the calling of the general election.

Nandy now doubts the forthcoming legislation will hold the door open to a customs union, and is moving away from supporting it again. Yet this is an obvious obstacle to Nandy’s candidacy.

Can she effectively argue that maintaining ‘principle’ on Brexit – even when it seems likely to fail – is not worth the loss of trust? And can she defend her previous vote?

Jess Phillips, who wrote an article in the Observer on the same day as Nandy’s opening pitch, has supported a referendum. Her article suggested she would be critical of indecision in the past.

‘I represent a Leave seat… and have never found it difficult to engage with my constituents on Brexit,’ she wrote. ‘My constituents don’t mind that we might disagree – they appreciate above all else a straightforward approach.’

Phillips’ candidacy may well require significant recruitment into the Labour Party. YouGov polling in July showed that members knew who she was (good for Phillips) but that she divided opinion (less good).

Labour’s National Executive Committee (NEC) will be in control of the window for ‘registered supporters’ – people who want to sign up to vote but not fully join – and how much this will cost. These are decisions to be made in the first week of January.

More popular with the current membership (at least on past membership polling) are Sir Keir Starmer and Emily Thornberry. Both may run on their records of having pushed – often publicly – for a clearer Brexit position, and stronger backing for Remain.

This runs the risk of criticism, particularly from some Labour MPs; but remember MPs will be talking to the membership and supporters during this contest, if they manage to get the required nominations.

Both may present alternative strategies for the election that has just been lost.

Yvette Cooper, the former Cabinet Minister and MP for Normanton, Pontefract and Castleford, has also been discussed in the media as a possible candidate.

On Brexit, she certainly has a record to discuss – having amended the last Budget with an ‘anti-no-deal’ clause and taken through the ‘Cooper Act’ on extending Article 50.

Clive Lewis and David Lammy have also said they are considering a run. Both start from strong Remain positions, and will be critical of Brexit equivocation.

It is inevitable, though insufficient, for Labour’s forthcoming debate to consider Brexit as a factor in its defeat. It will also be a factor in the next leader’s chances of success.

Indeed, the extent to which a new Labour leader can pick apart Johnson’s Brexit strategy may well affect how successful this Conservative administration becomes.

By Dr Karl Pike, ESRC Postdoctoral Fellow at the School of Politics and International Relations, Queen Mary University of London.