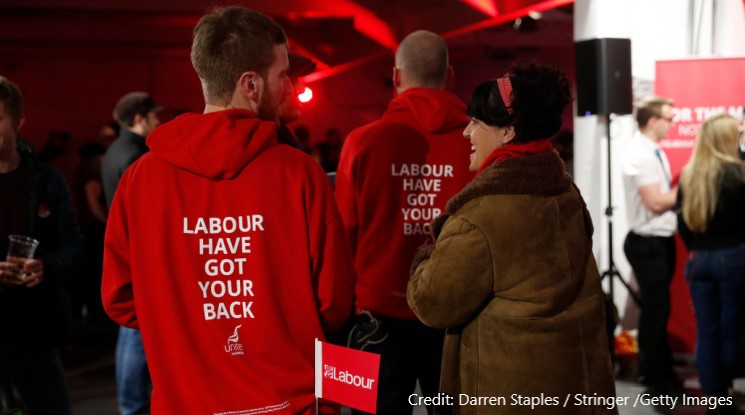 Whoever wins the Labour leadership contest will face an electoral map more challenging than any of their recent predecessors. The chart below shows three possible routes back to power for the party. 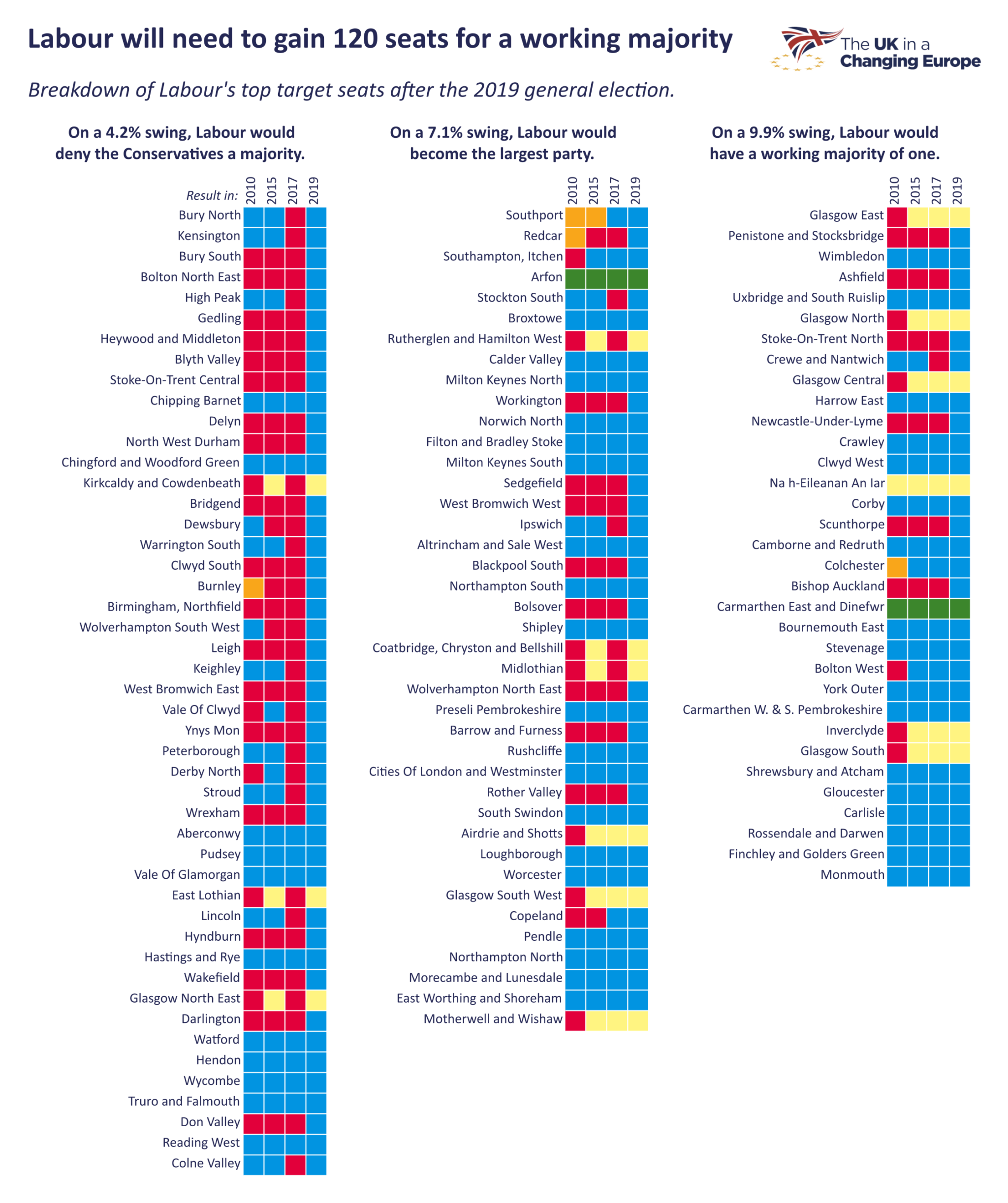 Based on a uniform swing (and assuming – a big assumption perhaps – that constituency boundaries stay the same) Labour would need a swing of 9.9% to win a working majority. That’s more than double the 4.5% swing from Labour to Conservative back in December, and means Labour would need to come close to Tony Blair’s 10.2% swing in 1997.

It would mean winning back 51 seats lost to the Conservatives in 2019, but also taking 47 seats held by the Conservatives since at least 2010 and reversing the march of the Scottish National Party to gain 15 seats in Scotland.

Labour’s target seats have moved in markedly different directions
The problem is not just the number of seats that Labour would need to gain. It is also that, recently, Labour has been (relatively) successful in some constituencies while performing abysmally in others.

That means to succeed Labour needs to continue to make gains in the kind of seats it has managed to do relatively well in under Corbyn, while reversing the tide in seats which appear to have rejected the party under his leadership. 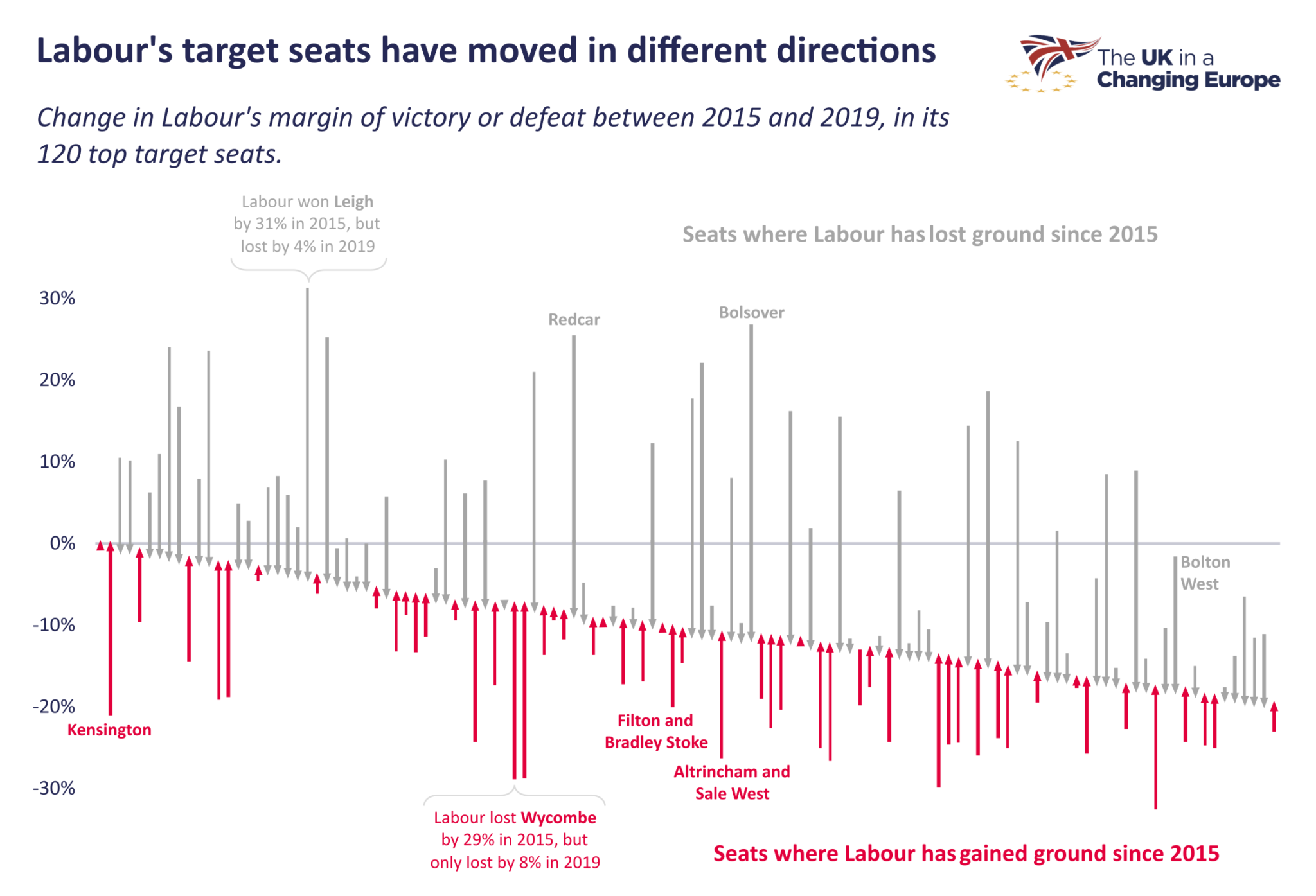 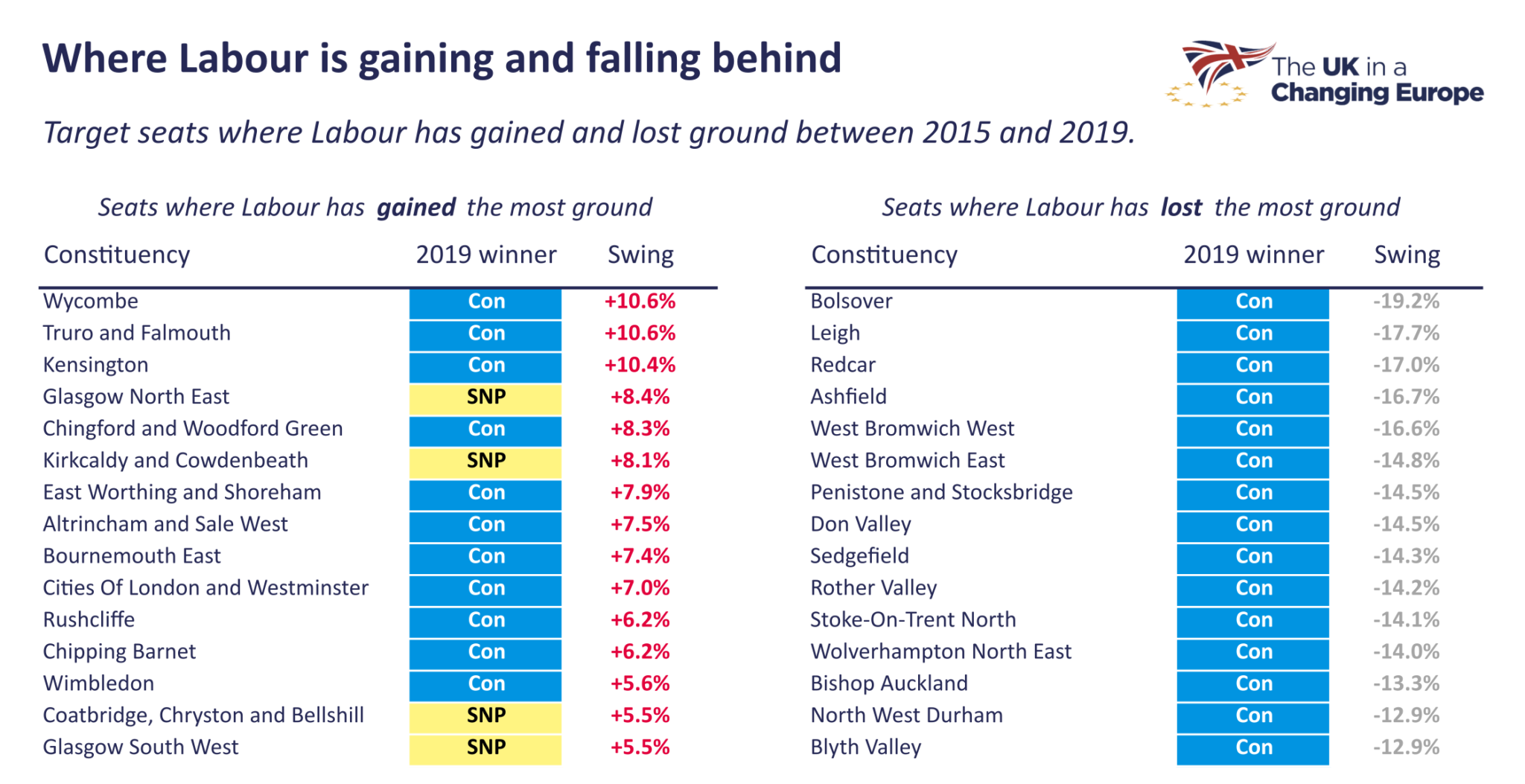 There is also no clear demographic pattern in Labour’s top 120 target seats. To win, Labour needs to hammer home its advantage among renters and win more than nine out of ten of the constituencies in the top 20% for rented accommodation.

However, there aren’t many more seats containing lots of renters left to win. The party also needs to treble the number of seats it holds that have an above-average level of home ownership. 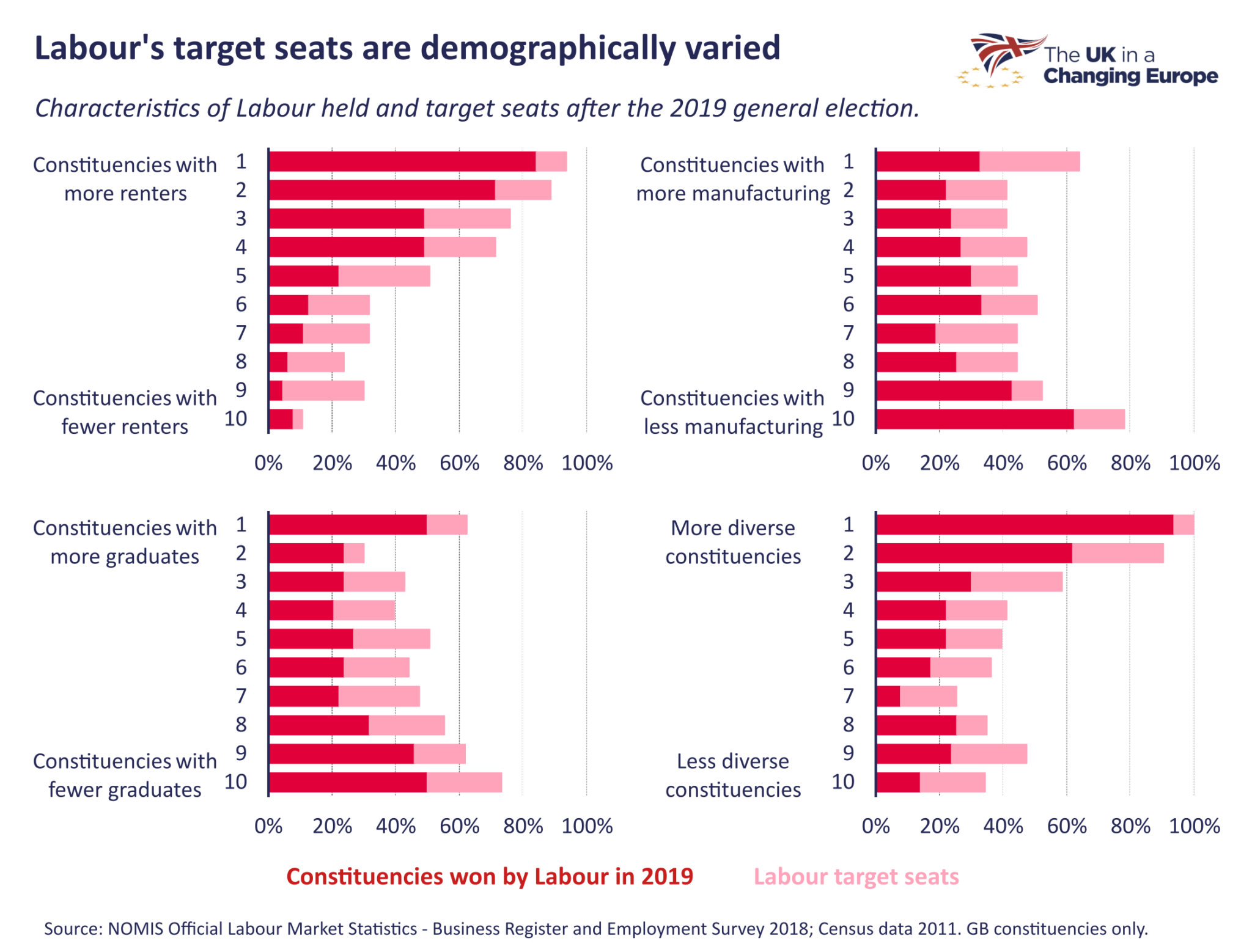 An electoral majority also runs through places where both the most and the fewest graduates live. Despite all the talk about the problems Boris Johnson may face in keeping his coalition of Reigate and Redcar together, seats the Conservatives hold appear have more in common than the seats Labour needs in terms of education, a key driver of voter choice.

Labour’s successes are geographically scattered, but it’s in the North where it needs to make up lost ground

Most of the target seats that have swung heavily away from Labour are in the north of England, north Wales and the Midlands, reflecting the collapse of the ‘red wall’ at the 2019 election. 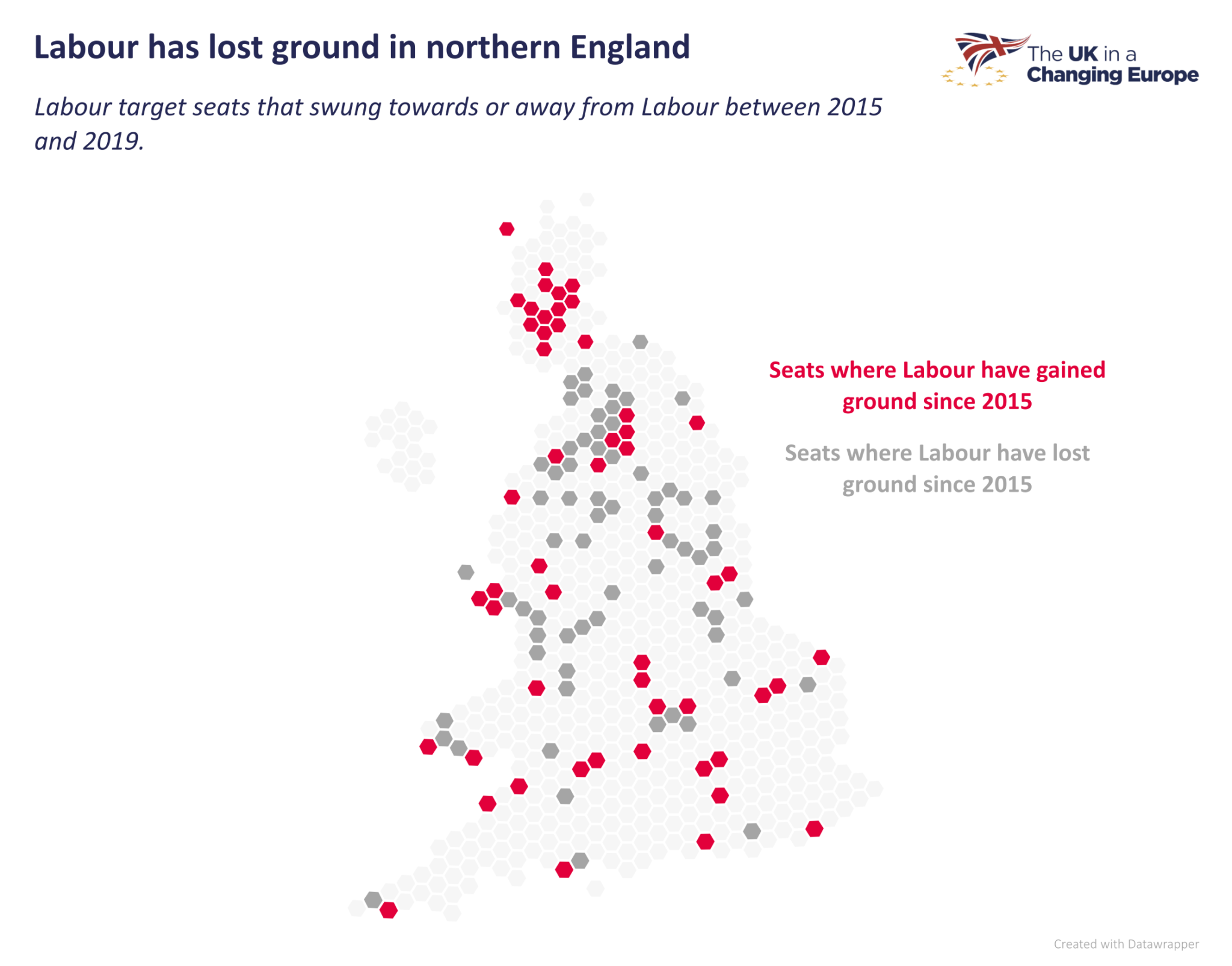 In its 15 target seats in Scotland, Labour has improved its performance relative to 2015. However, this mostly reflects the particularly poor results that the party chalked up in Scotland in the aftermath of the 2014 independence referendum.

The remaining 38 targets seats, where Labour has become more competitive, are scattered across England and Wales, with little concentration in any particular region.

As a result, a narrative around these seats akin to that the emblematic ‘red wall’ achieved is difficult to imagine. Yet building on the momentum (no pun intended) in these constituencies is likely to be just as important to the future of the Labour Party as regaining recently lost ground.

By Dr Alan Wager and Aron Cheung, researchers at UK in a Changing Europe.