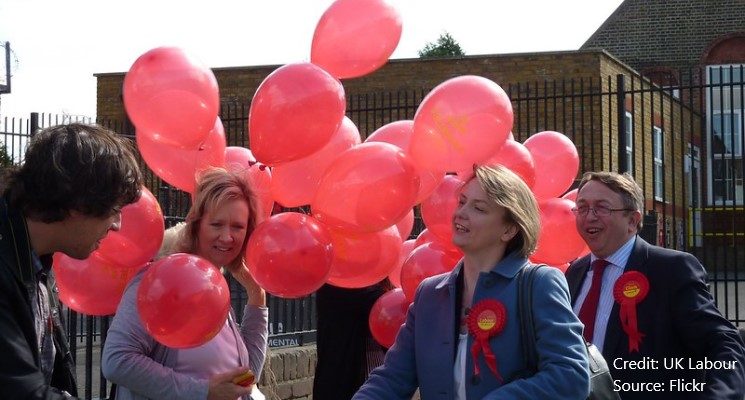 Hampstead or Hull? Walthamstow or Wigan? If, as Aneurin Bevan once said, the ‘language of priorities is the religion of socialism’, for the past few years it seems that where you stand in Labour’s internal conversation depends on the dialect you are speaking.

Lisa Nandy opened her leadership bid by arguing that ‘without what were once our Labour heartlands we will never win power in Westminster’. The fact that, from a standing start, she has made the final three of the contest is testament to the success of this message.

At first glance, basing your strategy principally on listening to people in seats where you lost makes sense. It also has the benefit of signalling emotional intelligence. But the understandable pull of this argument may mean that Labour learns the wrong lessons from its defeat.

Keir Starmer recently suggested something slightly different: that the Labour Party should, while not discounting those ‘red wall’ losses, ‘draw a line from London to Bristol and look south’ and prioritise areas of potential Labour growth.

This also has a clear logic: success begets success so, in order to work out how Labour can win again, it makes intuitive sense to look to where the party has performed (relatively) well in recent elections.

The problem for Starmer is that geographical reality is not quite as simple as he makes out.

On an electoral map of the UK, Shipley in Yorkshire, Rushcliffe in Nottinghamshire, Wycombe in Buckinghamshire and Truro and Falmouth in Cornwall all have one thing in common: they trended towards the Labour Party under Jeremy Corbyn and hence are plausible targets for the next leader.

To visualise this, the analysis we produced at The UK in a Changing Europe of the 120 seats where Labour is now within a 10% swing of the incumbent – also, incidentally, the number needed for an absolute majority of one.

It then divides them into two categories: the 53 seats where Labour are relatively close and have been gaining ground since 2015, and the 67 where they have been losing ground under Jeremy Corbyn. 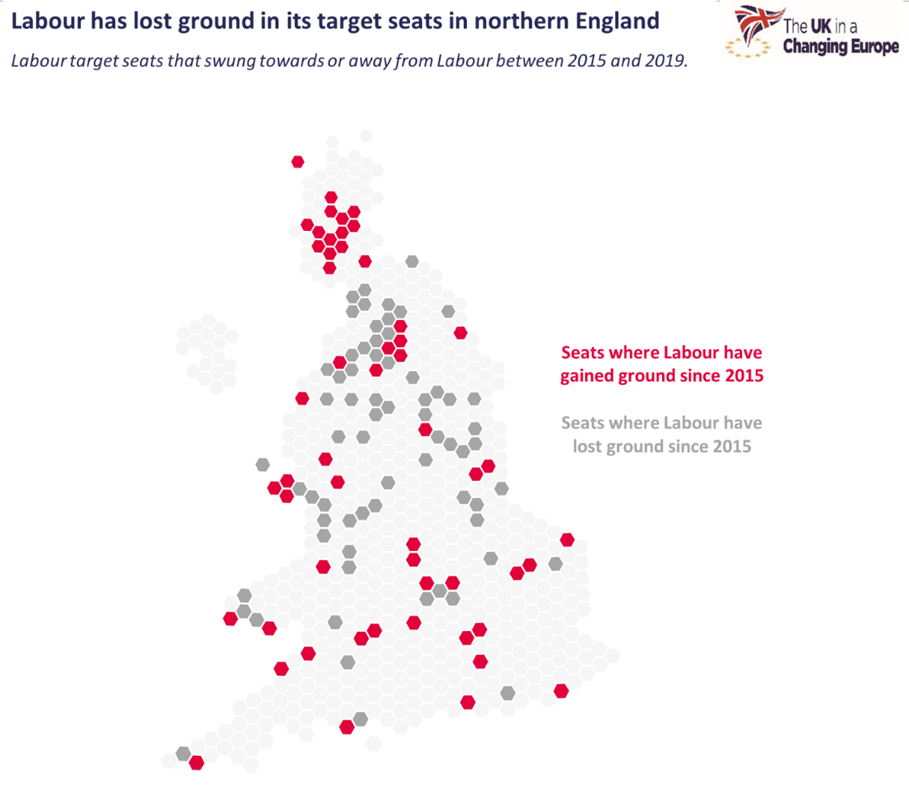 The places that have drifted away under Jeremy Corbyn – the grey seats in this figure – are often contiguous and in some cases clustered. The relative successes for the Labour Party – apart from in Scotland – appear to have no discernible pattern.

Take three examples: in Wycombe (a seat which even Tony Blair failed to win at his peak), a further 4% swing is needed; in Altrincham and Sale West, it is 6%; in Bournemouth East, it is 9%. In all three seats the Labour Party were over 25 percentage points behind the Conservatives in 2015, and Tory majority has more than halved since.

When ranking constituencies, Wycombe has the second-best GCSE results in the country. Altrincham and Sale West is in the top 10% in terms of the percentage of the population with a degree. Bournemouth East is in the highest decile in terms of the number of voters who are renters.

Each speaks in a different way to the educational and generational divide that has led Labour to perform well in some areas since 2015.

Yet there are obvious drawbacks to exclusively pursuing these new electoral avenues. There are only 38 seats in England and Wales where Jeremy Corbyn did better than Ed Miliband, but which require less than a 10% swing to go red.

In the absence of a parallel revival in seats where Labour has been falling precipitously further behind, any form of success – a majority of their own, or just denying Boris Johnson another one – will be difficult for Labour to achieve. After all, it is perhaps no surprise that to win a national election you need a national strategy.

It is perhaps cold comfort for Labour they are not alone in facing this conundrum. Nandy and Starmer’s competing interpretations of what constitutes electoral pragmatism for the Labour Party are a microcosm of the debate facing social democracy across Europe.

Nearly everywhere you look, centre left parties are being squeezed by green movements to the left and (they believe anyway) the radical right. PD, the social democrats in Italy, are a classic example of a party that has leaned into its educated middle-class voters and suffered as a result.

Yet the comparative evidence suggests trying to attract the ‘losers of globalisation’ through adapting policies on immigration and nationalism does not do anything for the support of social democratic parties either.

The useful portents for success may actually be closer to home. The answer to Labour’s conundrum involves pulling off something similar to the trick Boris Johnson managed to pull off for the Conservatives back in December.

Johnson built principally on the (often forgotten) advances made by Theresa May in the 2017 general election, while holding steady in areas of traditional strength. The issue of Brexit helped him do this. The absence of Brexit could have the reverse effect.

In other words, success lies in a combination of the two approaches articulated by the frontrunner and the insurgent in the Labour leadership contest.

Which, it is fair to say, really should give some encouragement to Labour party members as ballots for the leadership election final drop today. The tricky bit will come after this long contest, in pulling it off.

By Dr Alan Wager, research associate at The UK in a Changing Europe. This piece was originally published by the New Statesman.