The lead candidate system and its Brexit impact 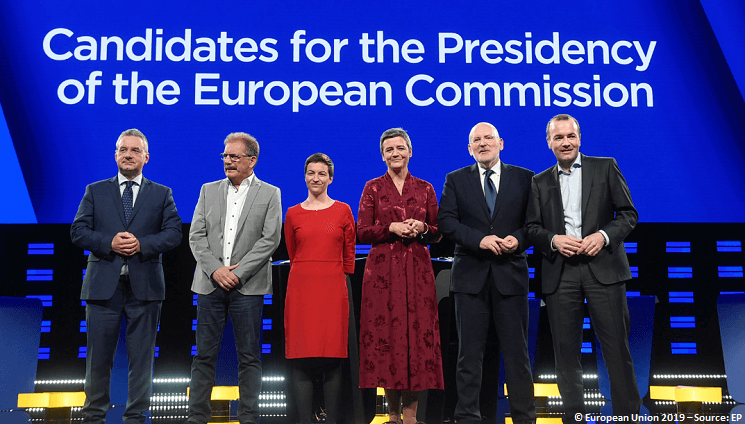 The elections to the European Parliament and the resulting majorities for its political groupings may have an impact on the further fate of Brexit negotiations – even if the rise of right-wing populist parties increases the pressure for a unified and stable EU negotiation position. They matter because the European Council, in search of a successor to Commission President Jean-Claude Juncker, will have to take their outcome into consideration.

We now have a competitive stand-off among the lead candidates (Spitzenkandidaten) nominated by the major party groupings in the EP. A Spitzenkandidat needs at least 376 votes in the EP to become Commission president, and to formulate a credible policy program for the next five years.

There is a degree of controlled politicisation as each of these candidates has a policy programme for the next Commission coloured by their respective affiliation with a European party grouping. While not a major component in their individual campaigns, it is possible to gauge certain differences of opinion on Brexit among three of the lead candidates: the German Manfred Weber, the Dutch Frans Timmermanns, and the Danish Margrethe Vestager.

Of these, the striking fact about the latter is that she declared her interest in the presidency only after the election, and as part of a larger leadership team from within her political home, the Alliance of Liberals and Democrats for Europe (ALDE) faction.

Weber, the lead candidate for the centre-right European People’s Party (EPP), is known for his opposition to changes in the agreed Brexit schedule. His previous performance as a long-serving MEP suggests a liking of established consensus positions and majority opinions within the continental Christian democratic camp. In other words, a re-opening of the Brexit envelope would be unlikely under his leadership.

This fits with his belonging to a slightly more pro-European wing of his own Bavarian Christian Social Union (CSU) in German politics. It also explains his continuing endorsement by the German Chancellor, Angela Merkel, and her Christian Democratic sister party (CDU).

In the run-up to the EP elections Weber welcomed the Brexit deal negotiated by Theresa May and its close alignment with fundamental European political principles. He objected to further extensions of the Brexit schedule, and insisted on the mutual acceptance of clear procedural safeguards. Accordingly, he was not comfortable with the late participation of the UK in the EP elections, as this pushed the Brexit dilemma beyond a topic restricted to UK domestic politics.

Preferably, Brexit and its political relevance should be confined to the outgoing Commission; while a second referendum or a general election in the UK might change things, he sees continued discussion over Brexit as a burden for the incoming Brussels administration. At best, efforts should concentrate on a new trade deal with the UK as a ‘third country’.

Timmermans is the lead candidate for the Progressive Alliance of Socialists and Democrats. In his view, Brexit raised fundamental issues about the future survival of the EU. More than ever, its institutions should highlight their record of achievement when confronting some of the harshest critics.

In contrast to others, however, he has not excluded the possibility of the UK rethinking its exit plan. It is noteworthy in this context that his EP party grouping benefitted from the seats gained by British Labour MEPs. (By the way, there is no such advantage for the EPP, as there is no political party affiliated with it in the UK.)

Less known outside EU circles has been his role as chairman of a Commission task force on subsidiarity and on ‘doing less more efficiently’. Potentially, this might take centre stage in fleshing out the future relationship between the EU and the UK in a post-Brexit world. The subsidiarity principle demands that the EU become active only if policy objectives cannot be achieved sufficiently by the member states acting alone either at national, regional, or local level.

Rethinking this long-established principle might suggest a re-delegation of competencies in whole or in part to the member states, and a renewed understanding of subsidiarity has the potential to promote greater ownership and understanding of what the Union is about. Remainers will welcome this general promise for a better involvement of regions and stakeholders, as well as extended possibilities to review and repeal legislation, if so required.

However, given the results of the EP elections, a reconstituted green-liberal block or a new alliance of party groupings could act as an unanticipated king-maker. The power games in the Council over the next few months, in combination with the number of vacant top jobs in EU institutions, leaves several scenarios open.

French President Emmanuel Macron, for example, might insist on a solution that favours the team around Vestager, drawing Merkel on his side by supporting a German candidate for the presidency of the European Central Bank. Positions as Council President, President of the EP, and as High Representative for the Common Foreign and Security Policy can enter potential bargains.

Yet, all this might not be good news for Brexiteers aiming for a re-negotiated deal. Member of the currently seven strong leadership team of the ALDE group is a certain Guy Verhofstadt, known for his EU enthusiasm. He is associated with Macron’s reformist drive for a more progressive core Europe, and leans towards a tough handling of the Brexit process.

Margrethe Vestager, presenting herself as the moderniser with leadership experience in an important Commission portfolio (and not as an economic arch-liberal) might stand a chance. Only her stance as an early critic of the lead candidate system could backfire at some stage of the selection process. On the other hand, the belief in a progressive majority, after the first post-election European Council meeting, appears very much alive. Perhaps a majority in the Council is conceivable if supported by a reconstituted ALDE faction in the EP that attracts Green and Social Democratic parties in an open party platform.

The known unknown in the broader calculation is the role of right-wing populist parties in the new EP. The Brexit saga has convinced some of their membership, such as the Alternative for Germany (AfD), to argue in favour of strict EU reforms, rather than endorsing further calls for exit. No doubt, the increased number of right-wing populist MEPs (112) separated in two party groupings of 54 and 58 seats might influence coalition-building.

As it stands, majorities are even conceivable without a 180 seat-strong Christian Democratic EPP. At the end of the day, however, even the skilful Macron will fall short of a winning majority among Social Democrats (145 seats), Liberals (109 seats) and Greens (69 seats).

If the efforts of the Spitzenkandidaten over the next few weeks are without success, the European Council will reassert its role as decision-maker and recapture some of its influence in the nomination process for this as well as other top positions. Given its intergovernmental composition this would most likely reduce the chances of a Brexit re-negotiation further.

By Günter Walzenbach, Associate Professor in Political Science at the American University of Armenia, Yerevan, and a Senior Lecturer in European Politics at the University of the West of England, Bristol.