Since the vote to leave the EU, there has been a steady stream of publications considering new divides and new identities among the British electorate. It is true that it is barely possible to separate Leave and Remain voters based on their positions on a traditional ‘left-right’ set of values. However, to suggest that the old ‘left-right’ divide is no longer relevant in British politics is at best premature.

The language of ‘left’ and ‘right’ itself can be misleading when talking about the political values of the electorate, as it has both economic and social connotations. More useful is to think of values as having (at least) two distinctive dimensions, one economic and one social.

The economic value dimension closely resembles our ‘common sense’ understanding of the terms ‘left’ and ‘right’. It is concerned with issues of economic justice, economic inequality and economic organisation. The social dimension is less easily labelled, having variously been referred to as the ‘second dimension’, ‘other dimension’ and ‘open vs. closed’.

Here we adopt the label used when it was first measured in the British context: the ‘liberal-authoritarian’ dimension. Using data from the 2017 British Election Study, collected via face-to-face interviews in the weeks immediately following the general election, the economic ‘left-right’ positions of the electorate are measured using a scale derived from four items:

3)  We should be tolerant of those who lead unconventional lifestyles

5)  People who break the law should be given stiffer sentences

People are asked to express how much they agree or disagree with each statement on a five-point scale, from strongly agree to strongly disagree. The average of the items is taken to form a scale (running from one to five) with low values representing the ‘left’ and ‘liberal’ and high scores ‘right’ and ‘authoritarian’.

Previous work has shown that in most general elections between 1992 and 2017 it was the left-right dimension which was most useful for explaining the key voting choice between Labour and the Conservatives. But the EU referendum vote is barely connected to these values at all. 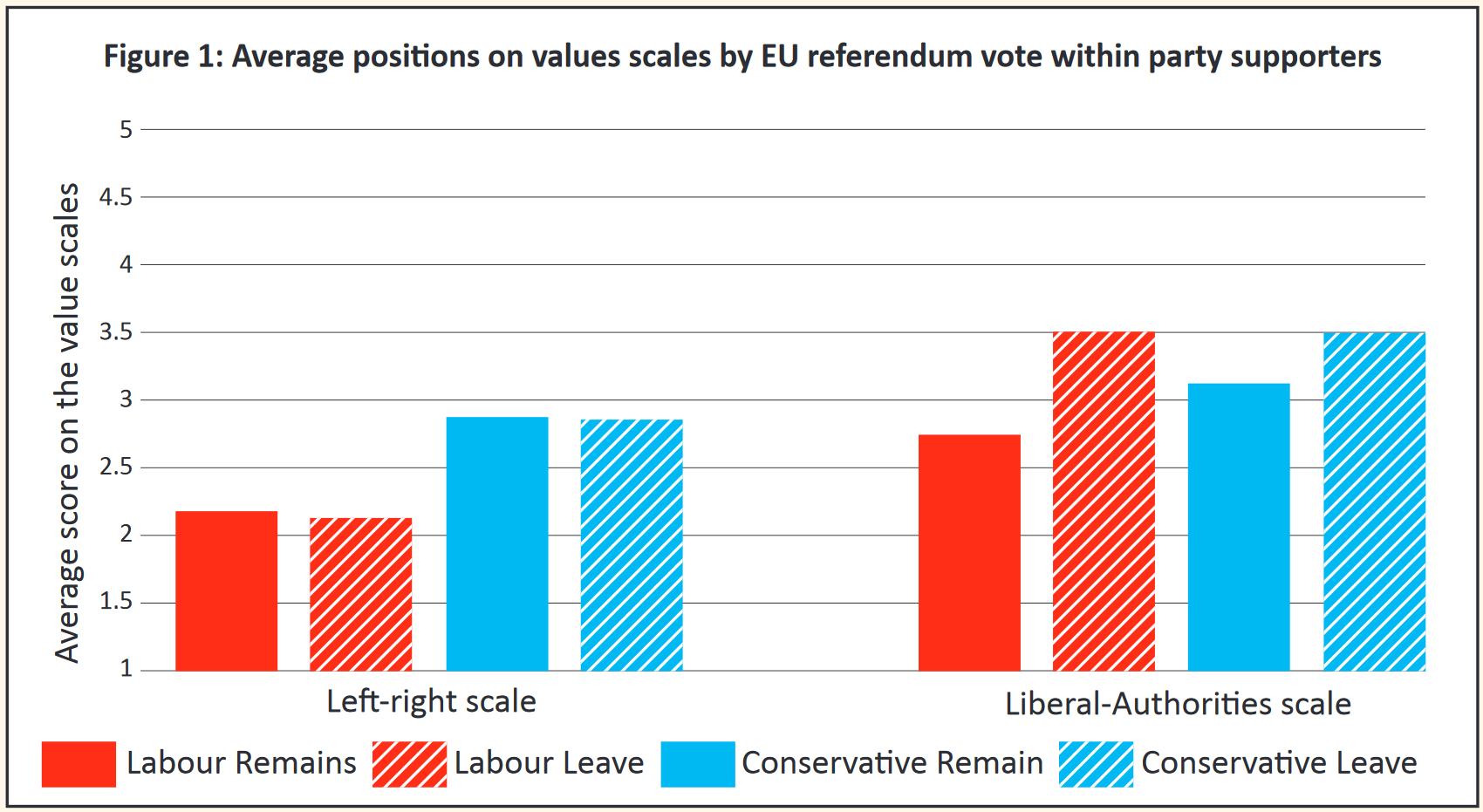 Understanding whether and how this might continue to shape British electoral politics is important. Left-right position relates to income, wealth and social class, and when it structures behaviour these factors remain important for voting decisions and electoral strategies. Liberal-authoritarian values are not related to income but are driven by education and age, when they influence behaviour these ‘new’ divides are more important.

Voters hold values on both these scales and combine these in ways which make behaviour unpredictable. To address this, it is helpful to think about voters as located within a ‘value space’ defined by these two dimensions.

To aid in thinking about positions within value space, these scales are each divided into three groups (Left/Centre/Right and Liberal/Centre/Authoritarian) and these positions are then combined to generate nine potential locations within each ‘value space’. Considering the two dimensions together more clearly demonstrates how they combine or cross-cut in their influences on political behaviour.

The share of the Leave vote varies substantially by Liberal-Authoritarian position within each category of the left-right scale. However, the patterns for Labour and Conservative vote share is clearly one which primarily varies from left to right. 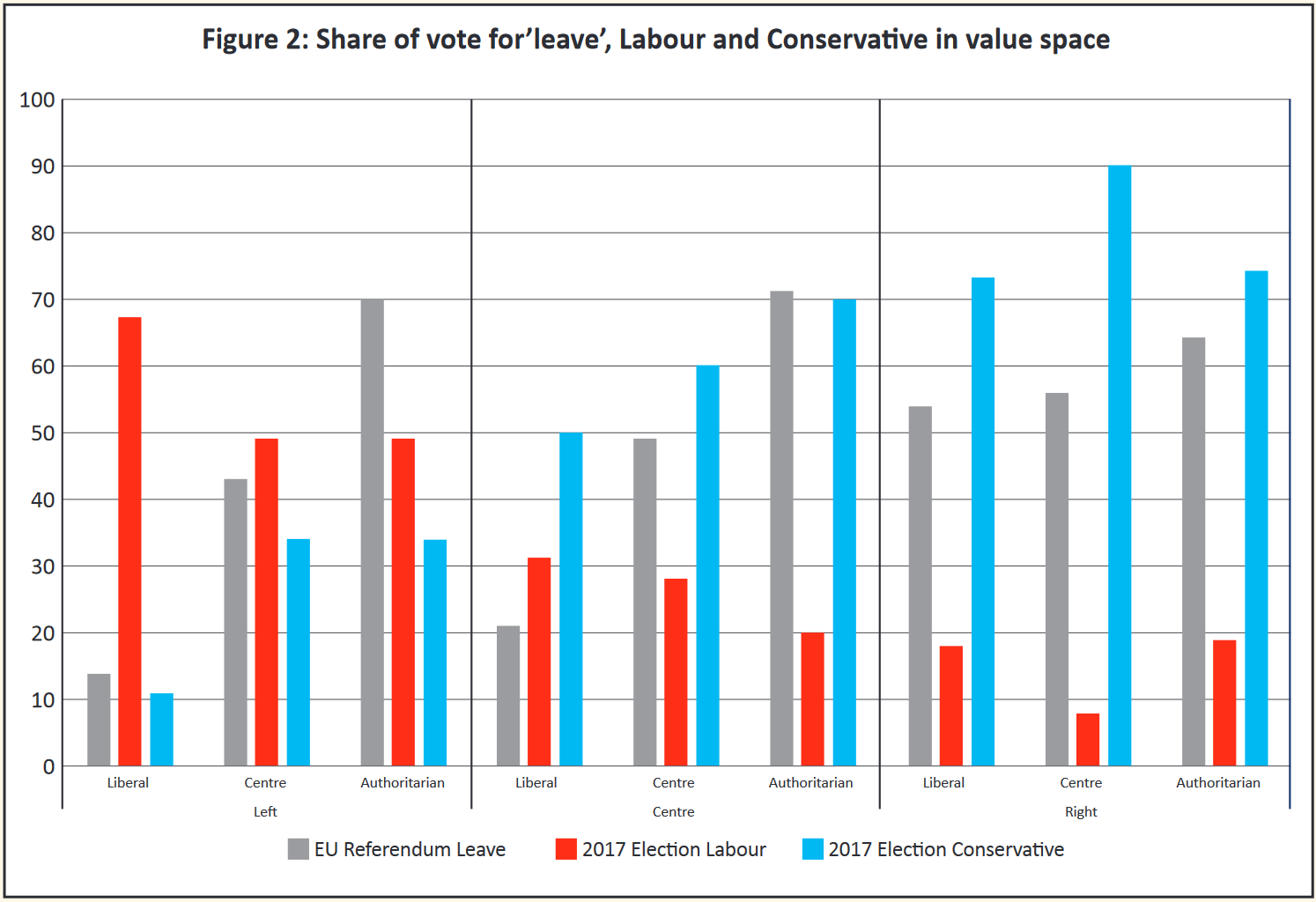 The relationship between values and political behaviour is complex and depends critically on the context of the vote in question. When political emphasis is placed on a traditional left-right divide, as in the 2017 general election, then voters’ positions on this divide are much more closely related to their behaviour.

However, other divides are not irrelevant. Liberal-authoritarian positions substantially modify party choices within left-right value positions. This pattern has been evident since at least 2010 and is part of a longer-term restructuring of party competition. It is not new, nor driven by the EU referendum. The result of the referendum may be better thought of as a symptom of this divide in the electorate rather than a cause.

Political values can no longer be solely interpreted through a left-right lens as other values cross-cut and modify. This leads to complexity which is not easily captured in a first-past-the-post electoral system, and to parties which are still organised according to the older logic of a simple left-right divide rooted in the economic (class) positions of the voters.

It is likely to mean that voting behaviour will be volatile for the foreseeable future, as voters and parties seek to find their places in this multi-dimensional space.

By Paula Surridge, Senior Lecturer at the University of Bristol. You can read The UK in a Changing Europe’s Brexit and public opinion 2019 report here.