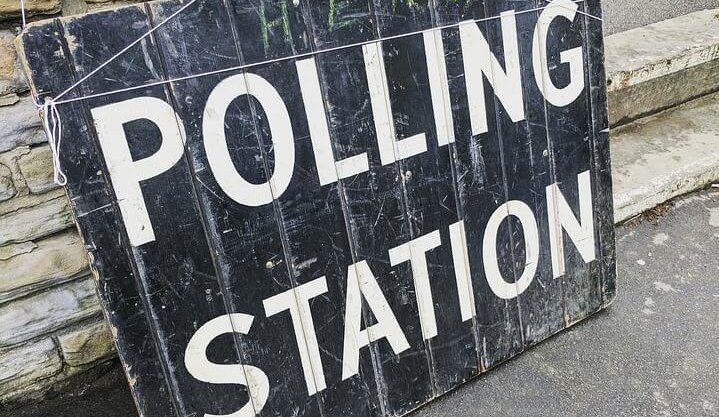 Eight years into a government’s term, we’d expect it to suffer midterm losses. And the Conservative government duly has. What’s more, because the recent local elections covered London—where Labour won two-thirds of the seats at the last general election—the results were always likely to favour the opposition, which they duly did. And, of course, before turning to Brexit, it is worth saying that local elections are about far more than this.

Nevertheless, as I argued immediately after the election, Brexit continues to bubble away below the surface. And the results underline a couple of things. First, Labour is triangulating its Brexit position better than the Conservatives (although not necessarily enough to make significant gains). Second, neither main party is managing the Brexit divide well enough to take a decisive lead.

As Anand Menon wrote recently, Labour’s Brexit position—favouring a slightly closer relationship with the EU than the Conservatives—has been highly effective, especially at the general election.

The local elections reaffirmed this conclusion. As the chart below shows, Labour more or less broke even in areas that voted Leave while making over 80 gains in Remain areas. The Conservatives, by contrast, suffered as a result of their Leave bias. The near 100 seats they gained in Leave areas were more than offset by the 130 or so they lost in those that voted Remain. The Liberal Democrats also managed to navigate the Brexit divide effectively. 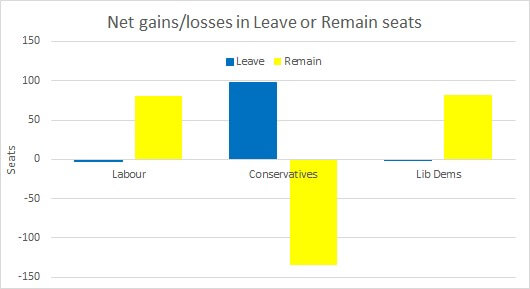 The Conservatives are a more polarising party, producing large losses in areas with strong Remain votes and big gains in areas with substantial Leave votes. Labour on the other hand has seen a more moderate effect across the Brexit spectrum, maintaining an advantage over the Conservatives all the way up to areas that voted 55% Leave. These include areas such as Bury and Bradford—traditional Labour strongholds—where the Conservatives had hoped, in vain, for a Brexit bounce. 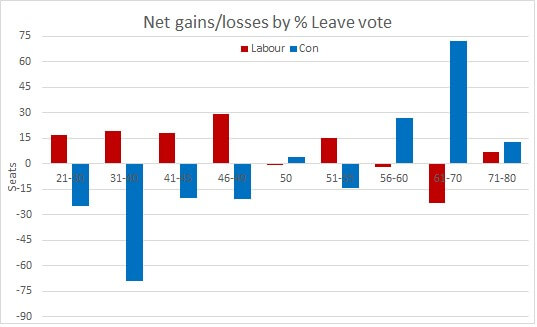 But Labour has failed to make major strides in these marginally pro-Leave areas. Yes, two of the councils it took—Kirklees and Plymouth—were Leave-voting, but its losses in Derby and Nuneaton and Bedworth showed its weaknesses in more strongly Leave-leaning areas. On the whole, its small advantage wasn’t big enough to precipitate change.

At the national level, some 109 parliamentary constituencies voted 51-55% Leave, and almost two-thirds of them are Conservative. However, only a total of 19 are marginals. So there is little to play for at the Brexit margins. Unless there is a big change in the public mood either way on Brexit, it’s difficult to see where the extra seats would come from for either party to win a decisive majority.

Where Labour certainly has an advantage is London. However, the capital’s parliamentary constituencies comprise 13% of the total in England, whereas in the local elections they accounted for 21% of the councils up for grabs. Therefore, the London effect was amplified.

This is evident in the chart below, which shows the net gains and losses of seats outside London in Leave and Remain areas. 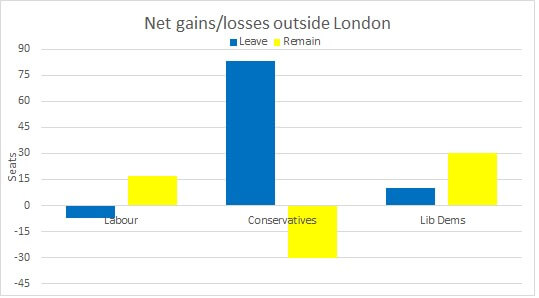 The difference is striking. The Conservatives gained about 50 seats outside London and lost about 90 within the capital. Labour gained about 60 seats in London and just 10 outside.

A weighted result that inflates the number of seats gained outside London and deflates the number gained inside offers a more reflective picture of England as a whole. As the chart below shows, this eradicates Conservatives losses and reduces Labour and Lib Dem gains. The gap between the Conservatives and Labour and the Lib Dems thus decreases from over 100 seats to around 40, a more realistic picture of what the result meant England-wide.

So Labour shouldn’t get too excited about the results in London. The geographical divide between the capital and the rest is stark. This hasn’t changed since the referendum, and the local elections reinforced this pattern.

The Brexit divide continues to shape where each party picks up votes and seats. There is an equal displacement principle taking effect in British politics. The more each party attracts its electoral coalition from one side of the Brexit divide, the more it repels the other. So far, neither main party has figured out how to solve this conundrum.