The mechanics of a further referendum on Brexit revisited: questions for the new Parliament 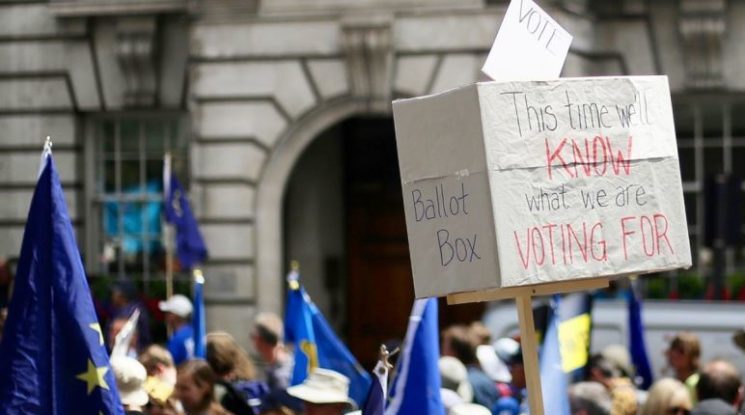 The Constitution Unit’s new report, The Mechanics of a Further Referendum on Brexit Revisited: Questions for the New Parliament, has just been published. The report does not advocate for or against a referendum, or assess the broader impact of such a vote. Rather, it explores the practical implications of the different options: the processes to bring a referendum about, the standards that it should meet, and, crucially, the timetable.

This post, adapted from the report’s final chapter, considers how the pieces fit together and what the overall timetable would likely be. The most obvious implication of this is for the length of Article 50 extension which would be needed.

The minimum timetable from parliament’s decision in principle to hold a referendum to the polling day is roughly 22 weeks. However, various factors could extend the timetable. The report considers those factors in detail: in brief they include the following:

The effect of these factors is summarised in the figure below. It includes slow and fast timetables for Labour’s renegotiation with the EU27: either three months (as proposed in the party’s own timetable), or just one month (to allow Labour to meet its promise of holding a referendum within six months). A six-month timetable could not accommodate other delays – for example, if passing the referendum legislation took longer than planned.

The quickest route to a referendum would be to proceed immediately post-election to a vote on Boris Johnson’s deal versus Remain. This is most likely under a minority Conservative government: in this situation, the Prime Minister might be compelled to accept a referendum amendment to his European Union (Withdrawal Agreement) Bill to secure its passage through parliament.

This would result in a referendum that was binding in the event of a Leave vote, as the bill implementing the outcome would already be on the statute book. Referendum supporters would undoubtedly want to ensure that a Remain vote was also binding, by including provisions requiring the Prime Minister to revoke Article 50 and repeal existing Brexit legislation.

If the Commons majority for this compromise solution held together, a referendum might be held in late May or June 2020 – assuming that regulatory changes were limited to the essentials.

In terms of regulation, Remain-supporting MPs would clearly wish to ensure some tightening up, particularly regarding the government’s role in the referendum campaign and its scope to use its resources to encourage a Leave vote.

A similar course could – perhaps counterintuitively – hold some attractions for a Labour-led government. Given that Johnson’s deal already exists, this would expedite the referendum timetable.

In addition, it would maximise the legitimacy of the referendum among Brexit supporters, who would likely consider a Labour deal entailing a closer future relationship with the EU not to be a ‘real Brexit’.

However, importantly, the Labour government would need to be prepared to implement Johnson’s deal in the case of a Leave vote. Labour’s own concerns, alongside those of the Northern Irish unionist parties and others about the deal’s potential impact on the Union, would be a significant obstacle.

Labour’s proposed timetable of renegotiating the deal and holding a referendum within six months is challenging. It would be difficult to test and finalise the referendum question – and hence to pass referendum legislation – unless the deal had already been secured. This would slow down the party’s proposed six-month referendum timetable, unless a new deal was secured very quickly indeed.

Making that deal binding in the event of a Leave vote, through passing a full Withdrawal Agreement and Referendum Bill, as the party proposes, would be wise; but it would add to the timetabling challenges.

The alternative of a non-binding referendum could meanwhile add to pre-existing concerns among Brexit supporters, who would both oppose a referendum in principle and likely consider this an unacceptable deal. If this kind of dissatisfaction led Brexit supporters to boycott the referendum it would raise very serious concerns about the legitimacy of the outcome.

Allowing more time for Labour’s renegotiation would stretch the timetable beyond the party’s preferred six months, requiring a minimum of closer to eight months. This would imply a referendum in the autumn of 2020.

If a longer timetable were allowed, this could provide space for more careful consideration of the reforms necessary to campaign regulation, perhaps with some consultation on these matters taking place alongside the negotiations with the EU.

Clearly this could have advantages; however, these would be counterbalanced by the inevitable frustrations and uncertainties that would be created by further delay.

In general, as pointed out by the Constitution Unit’s Independent Commission on Referendums, the UK could greatly improve its referendum practices – in terms of campaign regulation, opportunities for informed discourse, and building other participation mechanisms into the process. Referendums can usefully involve citizens in setting the question, deliberating on the options, and producing trustworthy briefing materials for voters.

Scope for using mechanisms such as citizens’ assemblies for a further Brexit referendum is more limited than it would have been before the 2016 vote. Nevertheless, some measures of this kind – such as a broadcaster-led citizens’ panel examining the implications of each of the options on the ballot paper – could, and ideally should, be included. They would be feasible within six months, while an eight-month timetable would allow such options to be developed more fully.

Whatever the parliamentary arithmetic, any further referendum is likely to remain publicly contentious. If one is to be held, it is imperative that it should enjoy maximum legitimacy and thus that it should be conducted well.