Fears of a surge in euroscepticism and populism dominated the electoral campaigns for the European Parliament elections of May 2019. These fears have proven to be largely unfounded or – at least – they have served to mobilise younger and pro-European voters.

Therefore, this new European Parliament is not necessarily more eurosceptic but it is certainly more complicated. The results have left us a more polarised parliament still under pressure from the extremes – which affects not only the way political groups work in the EP but also their capacity to close the democratic gap between the European Union and its citizens.

The European Parliament is certainly a more polarised and fragmented Parliament after the 2019 elections. 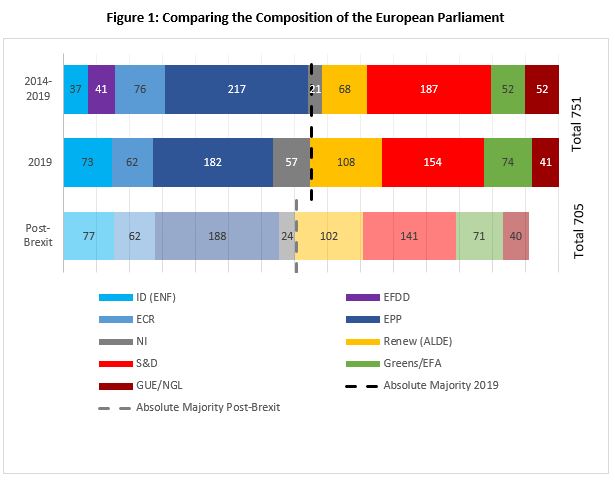 Find the source for data on potential composition after Brexit here.

If we look at the ideological (left-right) dimension, the larger mainstream groups have lost support in favour of the centrist group Renew (formerly the liberal ALDE group), the Greens and the far-right Identity and Democracy (ID) group (a variation of the former Europe of Nations and Freedom group).

As for the European integration dimension, the numbers show that the new parliament is not necessarily more eurosceptic: in 2014, 27% of MEPs belonged to a group that opposed the European Union (hard eurosceptics) or its goals and policies (soft eurosceptics).

The picture in 2019 is more complicated but not dissimilar: if we include non-attached members, 31% of MEPs can be considered eurosceptics.

There are, however, two main differences: the number of soft eurosceptics (those who are part of the European Conservatives and Reformists Group and the Confederal Group of the European United Left – Nordic Green Left) has decreased, while the representation of hard eurosceptics (former Europe of Freedom and Direct Democracy Group and ID) has become more complex.

On the one hand, the alliance between Salvini’s Lega and Le Pen’s Rassemblement National has become stronger – making it the fifth force of the European Parliament.

On the other hand, the new Brexit Party has been unable to resuscitate the former alliance between UKIP and the Italian Five Star Movement and, therefore, has lost an important source of income, the chance to hold offices as well as its main weapon: speaking time during plenary debates.

Therefore, when it comes to overall representation, the potential impact of euroscepticism in the European Parliament is mixed.

This scenario would not be substantially different after Brexit: the departure of the UK’s MEPs would reinforce eurosceptics on the right (ID and ECR) but, given the absence of the Brexit Party, the overall number would actually decrease to 28%.

Therefore, whether we look at the composition of the EP before or after Brexit, the presence of eurosceptic and populist forces on the wings of the EP continues to put pressure on mainstream groups.

If anything, the process of forming coalitions has become even more arduous than in the past legislature.

These are only some examples of possible coalitions, but they show a few aspects of the complexity at play here.

First, it is very difficult to build clear left-wing or right-wing coalitions while excluding hard eurosceptics like the ID group, and if mainstream groups want to build ideological coalitions, they need to include the soft-eurosceptics (ECR or GUE-NGL).

Second, it is almost impossible to build coalitions without the larger groups, and smaller groups need the support of at least the EPP or the S&D.

Third, the grand coalition between the EPP and the S&D is not enough to ensure an absolute majority anymore.

This gives more power to smaller groups like Renew, the Greens and the ECR, since they will become king-makers in many decisions; however, it can also turn them into the ‘squeezed-middle’ – always dependent on the wishes of the larger groups in what some have called the ‘tyranny of the majority’.

This hides a wide range of eurosceptic types: from those that refuse to participate in the legislative work of the EP (like UKIP in the past) to those that are seen as insiders and included fully in the daily life of the parliament (for instance the UK Conservative Party as part of the ECR group).

The ‘cordon sanitaire’ was particularly harmful for MEPs – such as those of the Five Star Movement – who wanted to participate but were often prevented from doing so because they were members of a hard eurosceptic group.

The use of the ‘cordon sanitaire’ continues to be alive and kicking and mainstream EP groups have already used it to exclude eurosceptics from getting key positions in the new parliament.

None of the ID and ECR MEPs managed to get elected as vice-president; this means that the ID group will not sit in the Bureau (responsible for organising the political life of the EP) and the ECR will only do so because one of its members acts as a Quaestor (responsible for the EP’s administration and working conditions). 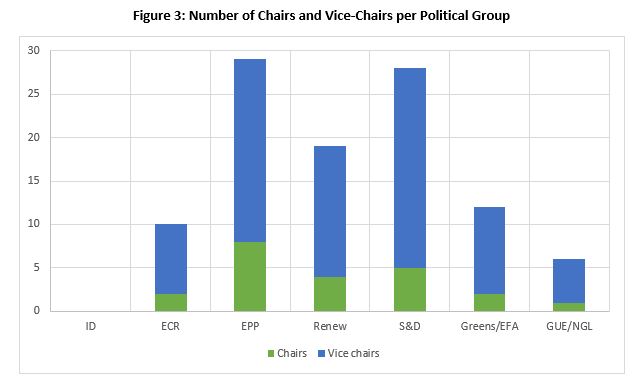 The ‘cordon sanitaire’ has been particularly effective in overriding what would otherwise be the proportional distribution of committee offices among political groups. The mainstream groups boycotted the two committee chairmanships that should have gone to the ID group according to the D’Hondt rules.

It did not help that the ID group nominated two French members of Rassemblement National as chairs of the Agriculture and Justice committees – especially given that Rassemblement National wants to re-nationalise the Common Agriculture Policy and that the Justice committee deals with particularly sensitive issues such as rule of law and decisions on parliamentary immunity.

The election of chairs and vice-chairs shows that the ‘cordon sanitaire’ has become less well-defined than in the past. With more populist forces inside mainstream groups, there is more room for games of allegiance and support across camps.

Fidesz (a suspended EPP member) has become the most obvious choice to cross the wall between (hard) eurosceptics and mainstream groups: while some Fidesz members supported ID members who wanted to become chairs or vice-chairs, the election of Fidesz candidates into various EP offices has opened breaches between and within mainstream groups.

These considerations may sound unimportant – pure political wrangling – but they do have consequences for the quality of democracy and representation in the EU.

The ‘cordon sanitaire’ is effective: it excludes those that are seen as too radical or objectionable (see the case of Poland’s former Prime Minister Beata Maria Szydlo), but it also helps eurosceptic and populist parties to portray the EU as being detached from its citizens and excluding those who voice non-mainstream opinions.

Therefore, with the boundaries of the ‘cordon sanitaire’ gradually expanding towards the mainstream, we need to pay more attention to potential backlashes and future rebounds of those it aims to slow down.

By Professor Ariadna Ripoll Servent, Assistant Professor of Political Science and European Integration at the University of Bamberg and Jean Monnet Fellow at the European University Institute in Florence.