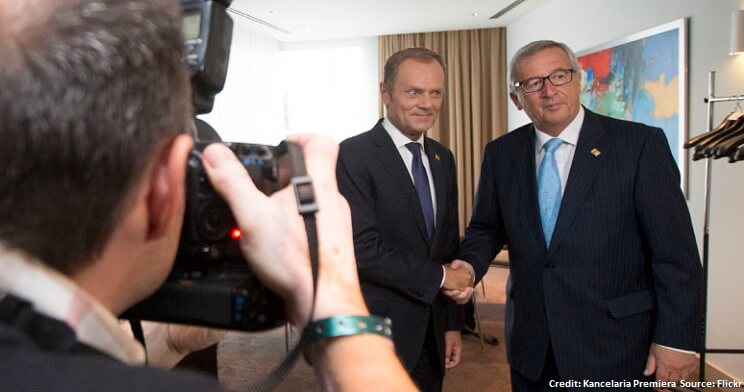 The EU is a union of countries, not people. This much is clear in member states’ priorities when deciding who gets the top jobs in the EU institutions. Geographical and political balance among member states is front and centre.

Yet demographic balance, on things like ethnicity and gender, is often secondary. This despite them having equal weight in the treaties: “…due account is to be taken of the need to respect the geographical and demographic diversity of the Union and its Member States.”

EU leaders began these discussions proper at last week’s European Council meeting in Brussels on the important business of divvying up the ‘top jobs’. The presidencies of the European Council, Commission, Parliament and the High Representative for Foreign Affairs are all up for grabs, as well as the presidency of the European Central Bank (ECB). This is far from a straightforward process.

For a start not all of the roles are entirely in their hands. The President of the Commission also has to be approved by the Parliament. Complex wrangling is ongoing between Donald Tusk, the President of the European Council, and leading parliamentarians to ensure the political groups are fairly represented in these posts for the next few years.

Yet even the roles which are in the hands of EU leaders are hardly any easier to decide. It’s not just the traditional political affinities of the individuals to consider. The treaties also state that geographical balance must be achieved as well. That means these roles can’t simply be dominated by the bigger, western member states.

Yet in all this horse-trading, it is easy — far too easy — to forget about one crucial factor: gender. The EU has a chronic gender problem. And the facts are striking.

In the current Commission of Jean-Claude Juncker, just under a third of Commissioners are women.

Since the first European Parliament elections in 1979, only two of the 15 Presidents have been women, albeit that the first and most prestigious occupant of the role — Simone Veil— was a woman.

Of the 21 individuals who have held a position on the executive board of the European Central Bank (ECB), just three have been women. The President has always been a man.

And the European Council presidency, which has only been occupied twice so far, has always been held by men: Donald Tusk and Herman Van Rompuy.

None of this is to say that gender is the only diversity issue the EU has, far from it. But in itself it is pervasive and damaging to the credibility of the institutions. Not least it feeds into the narrative — popular among some of its most ardent eurosceptic critics — that it is still an ‘old boys’ club of backroom deals.

Just look at the shadowy appointment of Martin Selmayr as Secretary-General of the Commission at the end of last year, which the European Ombudsman concluded ‘damaged trust in EU institutions’. The same applies when it comes to gender balance.

Already in the process to decide the top jobs, gender appears to be a second-rate consideration. Two members of each of the three biggest political groupings have been carefully chosen from the European Council to undertake talks on these posts.

A careful balance has been struck of leaders from two northern member states (Mark Rutte and Charles Michel), two Mediterranean ones (Pedro Sánchez and António Costa) and two eastern ones (Andrej Plenkovic and Krisjanis Karins). Yet they’re all men.

Granted, only four leaders of the European Council are women, and one of those is Theresa May who is hardly going to get involved. But still, it gives a stark impression that for the men at the top of the EU — and it is mostly men — this isn’t a priority.

It might be argued that this is just ‘window-dressing’ and ultimately doesn’t matter. Yet  backward views about the role of women in society remain widespread across the EU. A recent Commission report highlighted that a majority of respondents in more than half of EU countries thought that a woman’s most important role was in the home.

In Bulgaria, Hungary, Poland and the Czech Republic, as many as four in five people held this view. If major public institutions continue to look like boys’ clubs, is it any surprise that these views persist?

According to some reports, just one of the four top jobs may go to a woman, and the Commission presidency could remain a man-only zone. At this stage, these are only rumours, if highly plausible ones. Plus, the main contenders for the ECB presidency are all men too.

The EU treaties don’t explicitly state that gender balance must be maintained in the distribution of these jobs. But they do refer to a ‘demographic’ balance. For too long, EU leaders have ignored the particular demographics don’t fit with their political deals.

By Matt Bevington, researcher at the UK in a Changing Europe. This piece originally appeared in BrexitCentral.