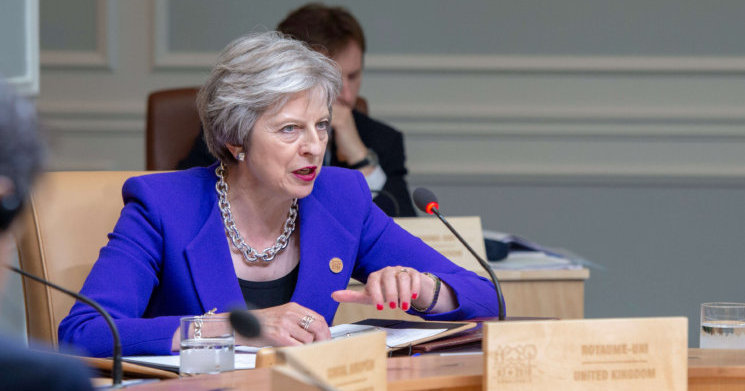 The “will of the people”. It’s a term deployed more and more frequently, and in more and more contradictory ways. The people have spoken; they didn’t vote for this; they’d never forgive us if we did that. And on, and on. To dig into some of the claims made, in a new report we asked prominent social scientists to consider some of the main issues round public opinion as it relates to Brexit.

Their findings make for fascinating reading. Insofar as it’s possible to extract key themes from such a wide-ranging collection, we’d suggest three. Division, broad continuity, yet underneath this some tantalizing hints of change.

Now, you may say — reasonably enough — that it hardly needs a bunch of academics to tell you that Britain is divided. Fair enough. But the scale and impact of the divisions warrants attention.

First, we’re increasingly polarised by Brexit identity. By mid-2018, only just over 6 per cent of respondents to the British election study did not identify with either Leave or Remain.

And these identities shape perceptions of both the present and the future. As Sara Hobolt and James Tilley explain, new information about Brexit is interpreted in ways that reinforce pre-existing views. Our Brexit bubbles, far from beginning to burst, are only expanding.

And divisions are apparent along national identity lines too. Among those who describe themselves as English not British, there is strong support not only for Brexit but a “hard” form of it involving control of our laws, freedom to make trade deals and ending budget contributions. Access to the single market and maintaining an open border with the Ireland were correspondingly less important to this group.

And divisions are apparent beyond public opinion as a whole. Colleagues looked at a host of data concerning not only MPs but also party members. Like the general public, those MPs who favour Leave are far more positive about the future of a Britain not in the EU. When it comes to party members, we find that division has become cavernous. 73 per cent of Tory members voted Leave, 83 per cent of their Labour equivalents Remain. 32 per cent of the Tories said they’d be delighted with a no deal outcome, 17 per cent pleased and 14 per cent relieved. 55 per cent of Labour members said it would make them angry, and 23 per cent betrayed.

And profound disagreement, as John Curtice explains, extends to the question of whether or not we should have a referendum. The polling produces flatly contradictory outcomes depending, in Sir John’s view, on working. And specifically, whether the question refers to a “people’s” or “public” vote or a referendum, and whether Remain is one of the options on a hypothetical ballot sheet.

Unsurprisingly, a substantial majority of Remainers back another poll while more Leavers are opposed (with the proviso that they become keener if the phrasing includes people’s or public vote). 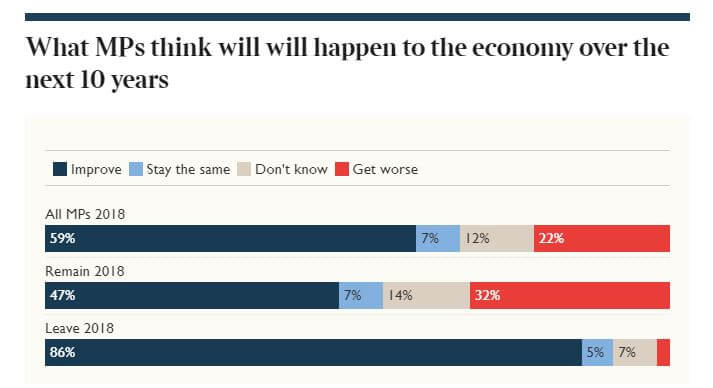 Meanwhile, in Scotland, the 2016 referendum seems, according to Ian Montagu, to have triggered a division within the heart of the nationalist movement. Attitudes to the EU made little difference to how people voted in 2014. Polling carried out after the 2017 election revealed that, while only 40 per cent of Eurosceptics said they would vote yes in another independence referendum, 60 per cent of Europhiles said they would.

Equally, support for the SNP among the former group has fallen by as much as 15 points.

We must also be careful not to get over excited about what Brexit might mean for electoral politics. Certainly, Brexit identities seem to have become stronger than party identities. In mid-2018 only 1 in 16 people didn’t have a Brexit identify, while more than 1 in 5 say they have no party identity.

Yet Paula Surridge points out that, while the “liberal-authoritarian” values divide is key to understanding the outcome of the referendum, it is overly simplistic to assume that it is replacing traditional “left-right” issues as the driver of political competition in this country. What is true is that, should any kind of shift be occurring, this will have important implications for party strategies in the future. Liberal-authoritarian values are driven by education and age, while left-right position relates to income wealth and social class.

Beneath such striking stability, however, we can detect intriguing evidence of a shift. Sunder Katwala reports on the findings of the national conversation on immigration, which underlined that most people are “balancers” when it comes to immigration — appreciating both its the costs and benefits. He also underlines the way in which deliberative settings such as the conversation tend to highlight voices or moderation in contrast to online surveys, which are dominated by more starkly polarized debate.

And there is evidence that public opinion is shifting in a sustained way towards a more liberal attitude towards immigration. Rob Ford points out that the share of voters in the regular Ipsos-Mori “issues index” who see immigration as one of the most important issues facing the country has more than halved from around 45 per cent in the months leading up to the referendum to under 20 per cent — the lowest level since 2001. Meanwhile, there has been a significant and sustained rise in the share of the public saying that immigration is both economically beneficial and culturally enriching.

Whisper it softly, but the approach to immigration outlined in the recent White Paper stressing skills and equal treatment of EU and non-EU immigration might chime rather well with public opinion, which prioritizes skills more than origins.

Lest our leaders get too happy, though, the final point worth making is the general dissatisfaction with them that much of the polling reveals. Unhappiness with how the negotiations have been handled has increased. Meanwhile, although dissatisfaction among town dwellers was an important driver of the 2016 vote, we now find that 68 per cent of people in cities and 70 per cent in towns feel that politicians don’t care about people like them. Nice that we can agree on something.