The ‘other Union’: Indyref2 and the future of the UK 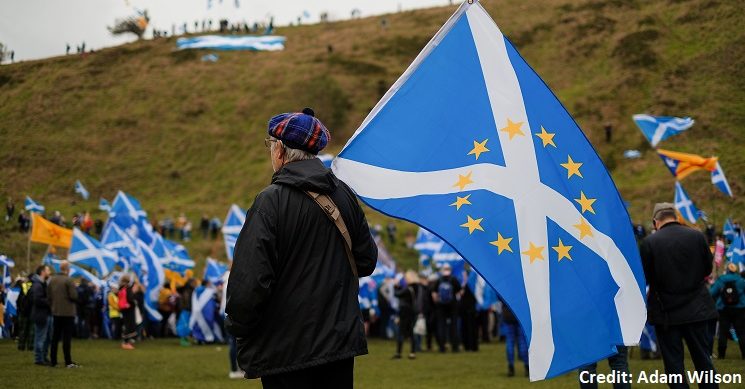 As voters throughout the UK prepare to go to the polls, constitutional issues are at the fore. The European Union and the UK’s position in it are central to debates, but broader questions of the union, in relation to Indyref2, have also been raised and these have particular salience within the Scottish electorate.

Far from settling the question of Scottish independence, the 2014 referendum (and the SNP landslide in 2015) brought forward new questions about the future of the union, and these issues have been exacerbated by Brexit.

Judging by the political discourse, and the manifestos of the main parties, a second independence referendum is a matter of when, not if.

Polling in Scotland has been limited, and made more challenging by the high number of marginal constituencies, but it does point to two seemingly contradictory trends: support for the Conservatives, largely built on their appeal to Leave voters, and an increase in support for ‘Yes’ in any future independence referendum, with increases in support seen among Remain voters.

Brexit appears to be the decisive factor for decision making in the 2019 general election, and any future independence referendum.

The SNP argues that it has a mandate to hold another independence referendum on the basis of the 2016 manifesto, and asks voters to support this mandate.

They argue that a vote for the SNP is an endorsement of their position that the people of the Scotland have the right to choose their own future and it is for the Scottish Parliament, not Westminster, to decide when that referendum will be held.

Limited Scottish polling suggests that the party is set to gain seats, but who will they gain them from and how will these gains be interpreted?

The SNP is unlikely to replicate its 2015 success but it is still expected to do well in the forthcoming election.

However, to be a win for the SNP and reinforce its mandate, they need to take seats from Conservatives rather than just Labour.

The party also faces internal tensions – concerns over candidates selected for the general election, questions over its performance in government, and over when and where and independence referendum would be held.

Conservatives have adopted what Michael Kenny describes as a hyper-unionist position, which had its origins in May’s premiership and continues under Johnson.

The party reject calls for a second independence referendum, and Scottish Conservatives offer a simple message to voters – for them, this election is about the union, with the Conservatives the only party which can guarantee Scotland’s place within it.

Little mention is made of Brexit by campaigners on the ground. The party hoped to replicate 2016 Holyrood and 2017 Westminster successes, but those campaigns were built on Ruth Davidson’s personal brand and voters appear more sceptical of Boris Johnson.

Labour’s position has shifted from the summer, when conflict erupted between London and Edinburgh over the prospect of another independence referendum.

The party is on uncertain terrain when talking about the union, and its shifting position reflects this discomfort, and perhaps, a sense, reinforced by polling that gains are unlikely north of the border.

The party has moved from a rejection of any further independence poll to suggesting it would acquiesce to demands for a referendum if an independence majority was present in Holyrood in 2021.

This makes them vulnerable to attacks on their unionist credentials, by both Conservatives and the Liberal Democrats.

The Lib Dems remain vague, positioning themselves in Scotland as the party which will stop Brexit, thus removing the mandate for the referendum and keeping the Union together.

However, the party has not been able to capture Scottish remain voters to the degree that it might have hoped.

Whoever wins on Thursday, Scottish independence will remain a live issue, and an increasingly complex one for both the UK government and the SNP.

While a Conservative victory might bolster the SNP’s case for independence, a Conservative government may be less likely to engage in dialogue over the terms of a referendum, and Brexit as envisaged by the Conservatives may make the practicalities of an independent Scotland more complicated, and costly.

Labour victory, or a hung parliament, might place the Scottish government in a strong negotiating position to secure a second referendum, but may remove some of the impetus around this debate.

Polling suggests any future referendum is likely to be a close one and will be shaped by dynamics at the Scottish, British and European level.

By Dr Coree Brown Swan, research fellow at the Centre on Constitutional Change at the University of Edinburgh.