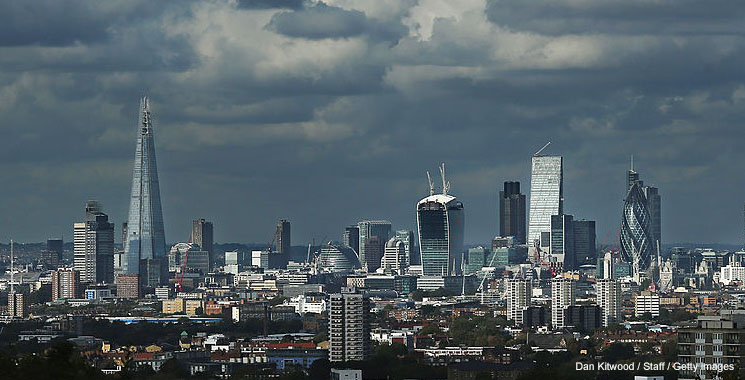 Our second Academic in the Spotlight is Dr Scott James, reader in Political Economy at King’s College London.

I guess if I had to sum up my research over the past decade it would be about the political economy of finance. What really interests me is the unique position of the City of London as one of the world’s leading international financial centres.

Like many people, this originated from watching the drama of the banking system collapse in 2007-8 and the subsequent battles by policy makers to tame the financial system.

I was fascinated by the politics of post-crisis reform, and the interests, ideas and institutions that shape the process – not always in a good way.

All this culminated with my recent book (with Lucia Quaglia) exploring the UK’s role in shaping post-crisis financial regulatory reform.

In particular, it examines how the interaction of three groups – elected officials, financial regulators, and the financial industry – influenced the UK’s regulatory approach at the international and EU levels.

In a nutshell, the book argues that UK regulators pursued more stringent regulation only when they had strong political support to resist financial industry lobbying.

We also find that they pursued common international rules when this protected the competitiveness of domestic industry, or made it easier to deal with the failure of complex financial firms with operations that crossed national borders. But UK regulators were often opposed to new EU rules when these threatened to constrain their freedom to act.

As a result, the UK was more successful at shaping international standards by exploiting the power of the City, its regulatory expertise, and by building alliances with the US. But the UK frequently lacked political influence within the EU, forcing it to use legal challenges to block new rules.

Finally, we use these lessons to think about the implications of Brexit for the future of UK financial regulation, speculating that we are more likely to see a gradual divergence from EU rules in some areas (e.g. hedge funds) than others (banking).

Talking of Brexit, I’ve recently looked at the role of the City of London in shaping the UK’s Brexit strategy.

Based on the first-hand testimonies of officials and lobbyists, I explain how the UK government’s neglect of financial services was a consequence of it choosing to prioritize ending freedom of movement.

This led to the marginalization of financial lobbyists from No.10 and the new Brexit department. But it also increasingly exposed divisions within the sector over Brexit.

For example, while London-based global banks pushed strongly for the UK to maintain full access to lucrative EU customers, many in the investment fund sector looked forward to the UK being able to scrap what they saw as burdensome EU rules.

In a follow-up article, I look at the politics of one of the City’s most lucrative financial activities: the clearing of euro-denominated derivatives. Clearing refers to the process by which a financial intermediary (e.g. a ‘clearing house’) sits between buyers and sellers of different types of financial contract.

In this case, we looked at the clearing of ‘derivatives’  – a type of financial contract that derives its value from the performance of some underlying entity, such as an asset like a commodity, or even currencies and interest rates.

Businesses (not just banks) rely heavily on derivative products to insure against uncertainty (‘hedging’), but also to make money by betting on their future value (‘speculation’).

Following Brexit, there was a concerted push by France and Germany to try to force the clearing of all derivatives denominated in euros to relocate to the EU27. But our analysis of the politics of euro clearing reveals important divisions within Europe.

On the one hand, the ECB, allied with the French government, has long wanted to relocate euro clearing for financial stability reasons to somewhere inside the eurozone, so that it would be under the jurisdiction of either EU or ECB supervisors.

On the other hand, the European Commission, and many non-euro area states, worry about the impact on large eurozone banks which rely heavily on London for derivative trading.

The Commission is also keen to constrain the power of the ECB, and to expand its own supervisory role over clearing houses outside the EU.

Moving away from finance, my work over the last year has led me to thinking about the wider lessons we can draw from the Brexit process. With Claudio Radaelli and Claire Dunlop, I look at the government’s (mis)management of the Brexit process by exploring how UK policy makers engaged in ‘learning’ during the UK-EU negotiations.

We show that the government’s capacity to ‘learn’ since 2016 was severely constrained by the highly polarized nature of the Brexit debate, and deep-rooted divisions within the Conservative party and Theresa May’s cabinet.

This fostered a high level of distrust in outside experts, and a culture of secrecy and suspicion within Whitehall.

The result was a highly dysfunctional form of learning which tended to rely on bargaining between competing factions within government. It also made it incredibly difficult for the government to develop a coherent strategy on Brexit.

Which brings me to the future. I’m really keen to extend these insights by thinking more widely about the role of economic ideas and narratives as drivers of policy change.

Over the past decade, we’ve seen policy makers being forced to ‘think the unthinkable’: whether this is central banks propping up the economy, trade negotiators contemplating life outside the EU, or government using public funds to guarantee jobs during a global pandemic.

The question that fascinates me is where did these radical ideas come from? And what ‘stories’ do policy makers tell to justify these exceptional policies? I’m pretty certain that this is going to keep me busy for a few years to come.