The problem with making predictions about the post-Brexit labour market 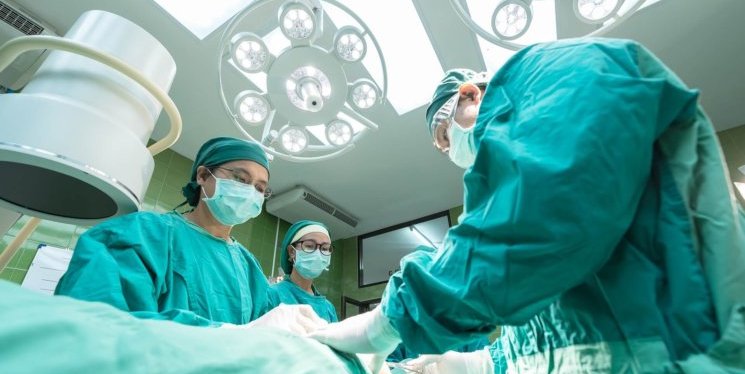 We have all heard conversations begin ‘the trouble with Brexit is…’ and we will no doubt hear lots more in the future – and this piece is no exception. The trouble with Brexit in the context of the UK labour market is that it is so hard to generalise what its effects might be on organisations’ workforce management.

This is because Brexit will have an impact on labour demand as well as supply, and will do so in variable ways – certainly between sectors and sometimes within them.

Using the consultant’s favoured 2×2 matrix one can explore this point. Where Brexit is unlikely to trouble business activities and there are no issues of labour supply (e.g. because it is small or stable or local, or some combination) then Brexit can probably be ignored in workforce planning terms (bottom left quadrant). 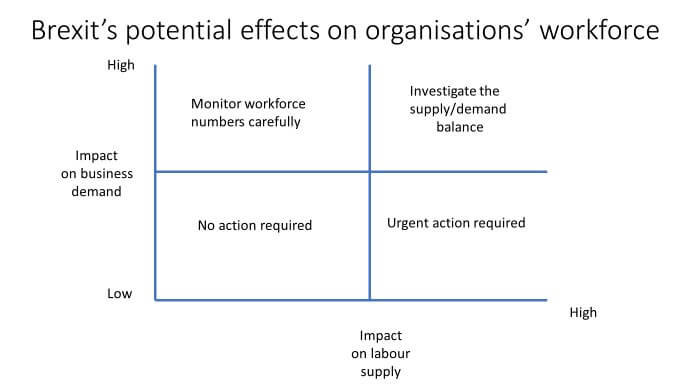 By contrast, for firms in the top left quadrant, the challenge will be to downsize while taking care not to overdo the cuts or remove those skills necessary to get the organisation back on its feet.

Trickier still to handle might be the top right quadrant where there are both threats to business activity and labour shortages such that the organisation may be in trouble if Brexit proceeds.

Of course, the problems may balance out: the requirement for fewer people may be matched by paucity of labour supply. Workforce analysis here should focus on not just having a numerical balance but a skills match too.

With the bottom right quadrant, where business can proceed as before but might be inhibited by staff shortages, the urgent action might be to tap into new sources of labour supply, build internal capability, draft in agency staff, improve recruitment and retention performance or even automate jobs and thereby avoid labour constraints.

Naturally though this analysis is rather too superficial. If we take two different sectors – higher education and health – we can see how the devil may be in the detail.

Higher education is facing significant financial threats with Brexit, but we will concentrate on two. The UK is currently party to Horizon 2020, the biggest ever EU Research and Innovation programme with nearly €80 billion of funding available between 2014 and 2020.

The UK will not have direct access to its successor. The government has promised to continue funding for agreed EU research projects until the end of 2020 and there is talk of the UK adopting ‘associate country’ status for that programme, but in the long term can HE expect to be as well supported by the UK as it has been by the EU?

Or take the threat to the fall in EU student numbers if tuition fee support is removed from undergraduate EU-domiciled students so charges are levied at UK not home-country rates.

Calculations by the Higher Education Policy Institute (HEPI) suggest a 57% drop in the 127,400 EU student numbers. Yet this might be offset by the falling value of the pound, helping students who are paying in euros.

On the supply side, about 14% of academics are EU nationals but this proportion is much higher in the less well-paid jobs. Whether they will start to leave after Brexit is an open question, though there is survey evidence suggesting they might.

Perhaps more worrying is that the next generation of researchers and lecturers will not come to the UK either because of the immigration rules (e.g. they earn too little) or because the UK is no longer attractive (say, without those big research grants).

What might happen is that the loss of income matches the loss of staff, and we would seemingly be ok (and in the top right quadrant). The concern might be the uneven distribution of effects – a loss of ‘overseas’ academics working in science, technology, engineering and maths being a particular worry, given their over representation in UK academia.

Turning to health, and really to the NHS, there are more than 160,000 EU/EEA nationals working in the sector. You will have heard reports of the supply problems it faces.

For example, between 2016-2017, 20% more nurses left the NMC register than joined. And there is an EU national component to this too, as the figure demonstrates: 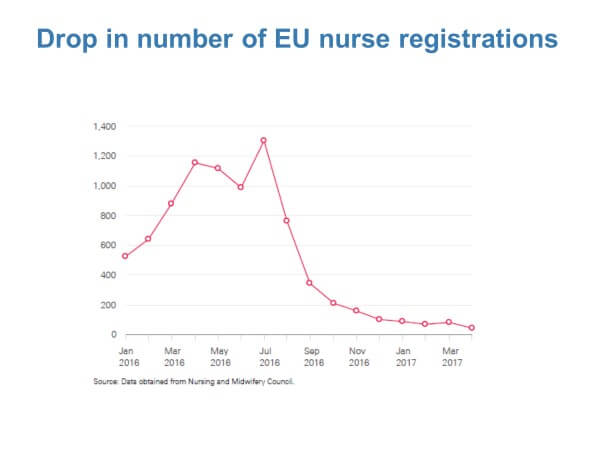 The same shrinking workforce can be seen with GPs; though not with hospital doctors and especially not with Consultants, whose numbers have been increasing significantly over the last few years. 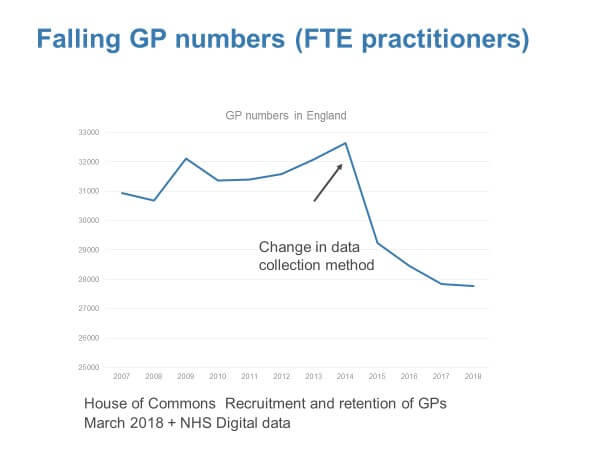 On the demand side, Brexit will not change the numbers of patients flowing through the NHS. Obesity, ageing or diabetes are the big issues, not Brexit.

Yet there are fears concerning drug trials and the release of medicines, on the import of medical devices and drugs, on collaborative research and clinical/public health networking and knowledge sharing that might add costs and slow treatment speeds.

Looking at our 2×2, the NHS would be at the bottom of the diagram, and probably in the bottom left. However, it might be edging rightwards and certainly so for individual NHS trusts.

The labour supply problems of the NHS were not caused by Brexit, but by a lack of joined-up workforce planning. Brexit may exacerbate these difficulties where, for example, trusts in the London area can’t replace Portuguese nurses with home grown recruits.

To do the latter takes time and the number of applications to nursing courses in England is down in 2018 compared with last year – but that is another blog!

So, on the basis of just these two examples we can see that the trouble with Brexit is that you need to get into the details of the workforce picture before you can say anything meaningful about its effects.

By Peter Reilly, principal associate at the Institute for Employment Studies.