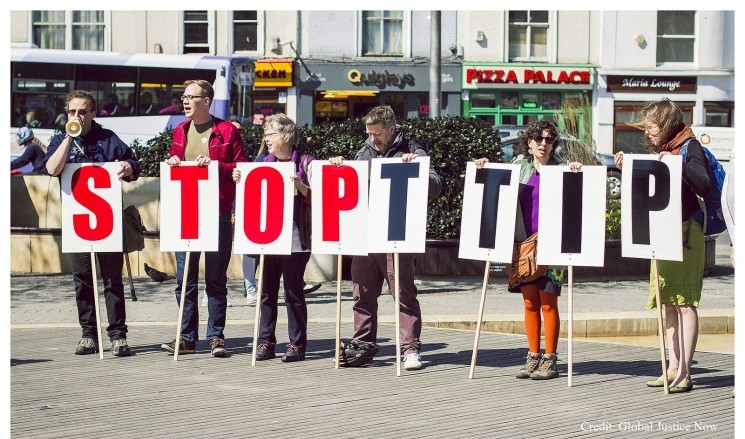 If successfully concluded, the Transatlantic Trade and Investment Partnership (TTIP) would be the most ambitious free trade agreement in history, with the potential to benefit millions of consumers in the European Union and the United States. TTIP is not only an economic project but also a political project to promote transatlantic ties. But in the event of Brexit, Britain would be left out and might at best hope for an inferior agreement many years down the line.

TTIP stands out because of its sheer scale – the European Union and the United States represent about 45 percent of global output. But it also stands out because it is a serious attempt to tackle duplicate regulation and non-tariff barriers such as “buy national” policies and technical barriers to trade. In the past, trade agreements were mainly about cutting tariffs, and that was relatively easy.

The benefits of TTIP could be very significant. A study produced by the Centre for Economic Policy Research indicates that in the best-case TTIP scenario, the average EU household of four could see its disposable income rise by EUR 545 per year by 2027 as a result of higher wages in many industries, higher productivity and lower consumer prices. But as always, these numbers should be treated with caution. They depend on the eventual outcome of the negotiations, and they are subject to the substantial uncertainty that such projections inevitably carry.

The road to ratification and implementation of TTIP will be long and arduous. On the US side, the presidential election cycle has stalled political momentum. We might not see a successful conclusion of TTIP until 2017 or 2020 – if ever.

On the European side, it seems that governments are currently losing the public debate. Trumping TTIP’s economic benefits in terms of numbers will not win the hearts and minds of the electorate. The potential benefits of TTIP are likely to be spread widely and thinly, while costs will be concentrated. If they want to sway the public debate, governments have to come up with convincing narratives and concrete examples of how the average person in the street can benefit from TTIP. They also need to explain why it is in the EU’s long-term interest to engage in such negotiations rather than leave it to the U.S. and China to write the rules of 21st century global trade.

Some key controversies stand out. They include:

Regulation and non-tariff barriers: The meat of the TTIP negotiations is not about tariffs but rather about aligning regulation and removing non-tariff barriers. A classic example is car safety regulation. There is no evidence that cars are less safe in either the EU or the US. However, car manufacturers currently have to comply with two different sets of regulation. Removing duplicate regulation would bring down production costs and arguably consumer prices, even if this does not automatically generate new trade.

While car safety is a common sense issue, negotiators face many controversial issues such as food safety regulation. It is important to note that TTIP might actually generate new regulation for future technologies. It is a common misunderstanding that TTIP will inevitably lead to less regulation.

Government procurement: Fair and open access to government contracts is supposed to be an essential part of TTIP. But access is especially difficult to obtain at the sub-federal level where the national government might have less power to legislate. Some promising progress has been made by the EU on that front in its recent free trade agreement with Canada.

Investor-State Dispute Settlement (ISDS): ISDS turns out to be a particularly contentious issue in the European debate. There are problems with ISDS, for instance its lack of transparency. This needs to be reformed. But perhaps not surprisingly, ISDS is also an issue where a great deal of wilful mischaracterization has been inserted into the public debate. At its core, ISDS is an enforcement mechanism that is supposed to avoid discrimination against foreign companies and ensure the rule of law. Britain has a relatively fair legal system, so it is easy to assume that ISDS is not needed. But how many people in Britain would trust a court jury in Mississippi to give them fair treatment?

Many people do not know that ISDS is a European invention and has been a staple ingredient of international agreements for decades. Nevertheless, there is considerable pressure on the EU to drop ISDS from the negotiations. This might well happen. But the US is concerned about the legal institutions in some Eastern European countries and would want something in return. It is easy to forget that TTIP is a negotiation. Neither side is going to get everything it wants.

ISDS has served as a main rallying point for anti-globalisation protesters. It has been hijacked by many campaigners with an ulterior political agenda, for instance by linking ISDS to the National Health Service in the UK, although public health provision will hardly be affected by TTIP. The public debate would benefit from a more diverse and balanced discussion that tries to see both sides of the argument.

Would a post-Brexit Britain be part of TTIP?

Most likely not. If the EU and the US concluded TTIP and Britain subsequently left the EU, then Britain would have to renegotiate with the US. Given that bargaining power largely depends on economic size, Britain would be in a substantially weaker position.

Apart from less bargaining power, Britain would face the additional problem of limited negotiating capacity and expertise. Britain has not concluded a trade deal in over 40 years and would to a large extent have to rely on external advisers.

A likely scenario is that the US would make Britain a “take-it-or-leave-it” offer on terms less favourable than to the remainder of the EU. But as President Obama pointed out during his visit to the UK in April 2016, the US would be in no hurry and Britain would find itself at “the back of the queue.”

Dennis Novy is Associate Professor of Economics at the University of Warwick and Research Fellow at the Centre for Economic Policy Research (CEPR). He is also Associate at the Centre for Economic Performance (CEP) at the London School of Economics and was the Specialist Adviser to the House of Lords on the Transatlantic Trade and Investment Partnership (TTIP), 2013/14. The views expressed are his and do not necessarily reflect the views of the House of Lords.