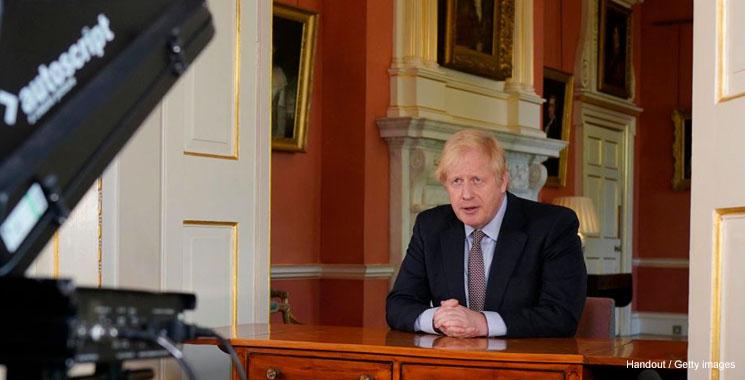 The rise in approval ratings of world leaders during Covid-19 is now well documented. However, improved approval ratings mean little if positive sentiment does not translate to who voters would prefer to run their country.

Conceivably, a voter can show empathy towards their leaders in a time when they are dependent on leadership while also  remaining loyal to their political party or presidential candidate of choice.

Here – using data from 27 countries affected by Covid-19 – I explore how the crisis has influenced party support.

The ‘rally-round-the-flag’ effect coined by John Mueller suggests that in times of crisis when the nation is threatened incumbent leaders benefit from a rise in public support. There are two well-known, clear examples of this phenomenon.

In the US, the rise in approval ratings of George W Bush in conjunction with 9/11.

In the UK, the rise in support for the Conservatives in conjunction with the Falklands War. Both events said to have significantly influenced re-election prospects. Figure 1 shows how impactful these effects were.

Figure 1: Evidence of the ‘rally round the flag’, George W. Bush and Margaret Thatcher

The effect, though, is frequently ephemeral. Both Presidents Jimmy Carter and George Bush Senior benefitted from huge rallies following the Iran Hostage Crisis (up from 30% to 57%) and Operation Desert Storm (up from 59% to 89%). Yet both failed to get re-elected.

So, what does this mean for the Covid-related rallies we have seen recently? Figure 2 below shows the average poll for the Conservative party.

The line is coloured from blue to red according to the level of stringency of the government measures at that point in time, measured by Oxford University’s Government Response Stringency Index.

To ensure that the observed trend isn’t merely a function of which poll is conducted at a given time the line is estimated using a technique (a ‘cubic spline generalised additive mixed model’ favoured over a kalman filter due to limited degrees of freedom for anyone big into methods) that helps control for polling ‘house-effects’.

What the graphic shows is rising support levels coinciding with increased government action. 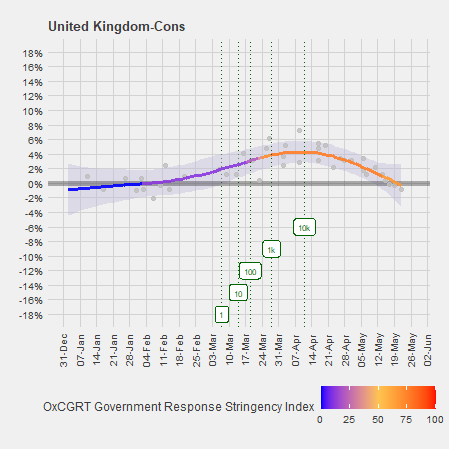 Figure 2: Support for the Conservative Party over the period from January to May, 2020.

This brings us neatly to what causes the rally-round-the-flag effect? And why might it be different in some countries as opposed to others?

Either way the data would suggest that governments of countries where the Covid-19 had the greatest impact had weaker rallies.

Figure 3 reveals the scale of the rally across a selection of countries. For comparative purposes the figure is indexed by the party’s average support share from 1 January to 28 February 2020. 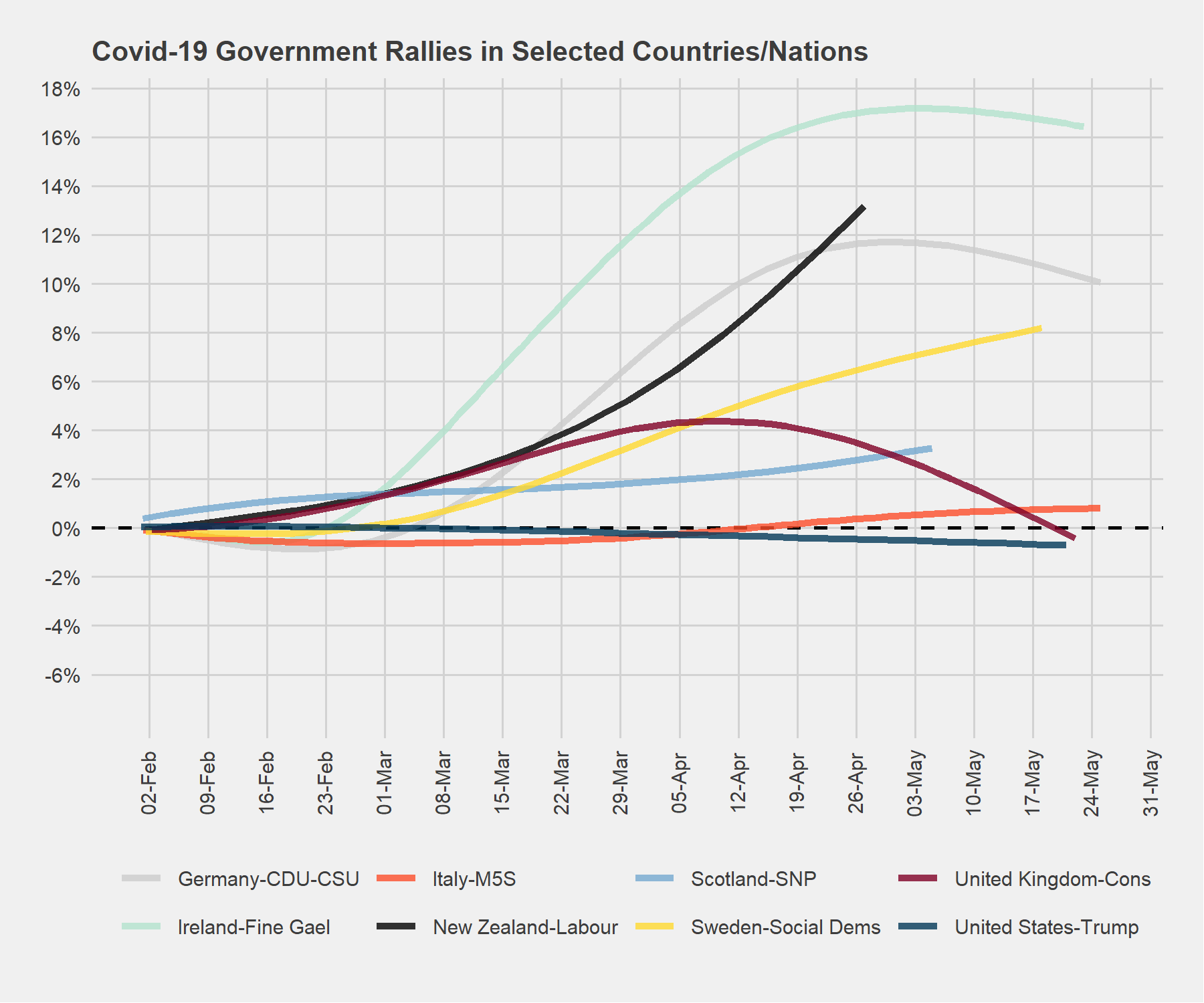 Those governments that are perceived to have ‘performed’ relatively well: New Zealand and Germany do appear to have stronger rallies in contrast to the US, Italy and the UK. Public opinion has also rallied behind the SNP in Scotland, which has not seen anything like the level of criticism aimed at the British government.

While an actual calculation of the government’s ‘performance’ with respect to the pandemic might require a complex analysis of the features of the crisis, public assessment might be simplified by the announcements of the numbers of deaths.

Figure 4 extends this analysis to a wider range of countries.

Firstly, in relation to the countries with over 10,000 confirmed deaths. In Italy (M5S), Spain (PSOE), the United States (Trump [v Biden]) and the United Kingdom (Conservatives) the rallies are much weaker than elsewhere.

It is clear that governments in countries most affected by coronavirus have not benefitted from a sustained rally round the flag. 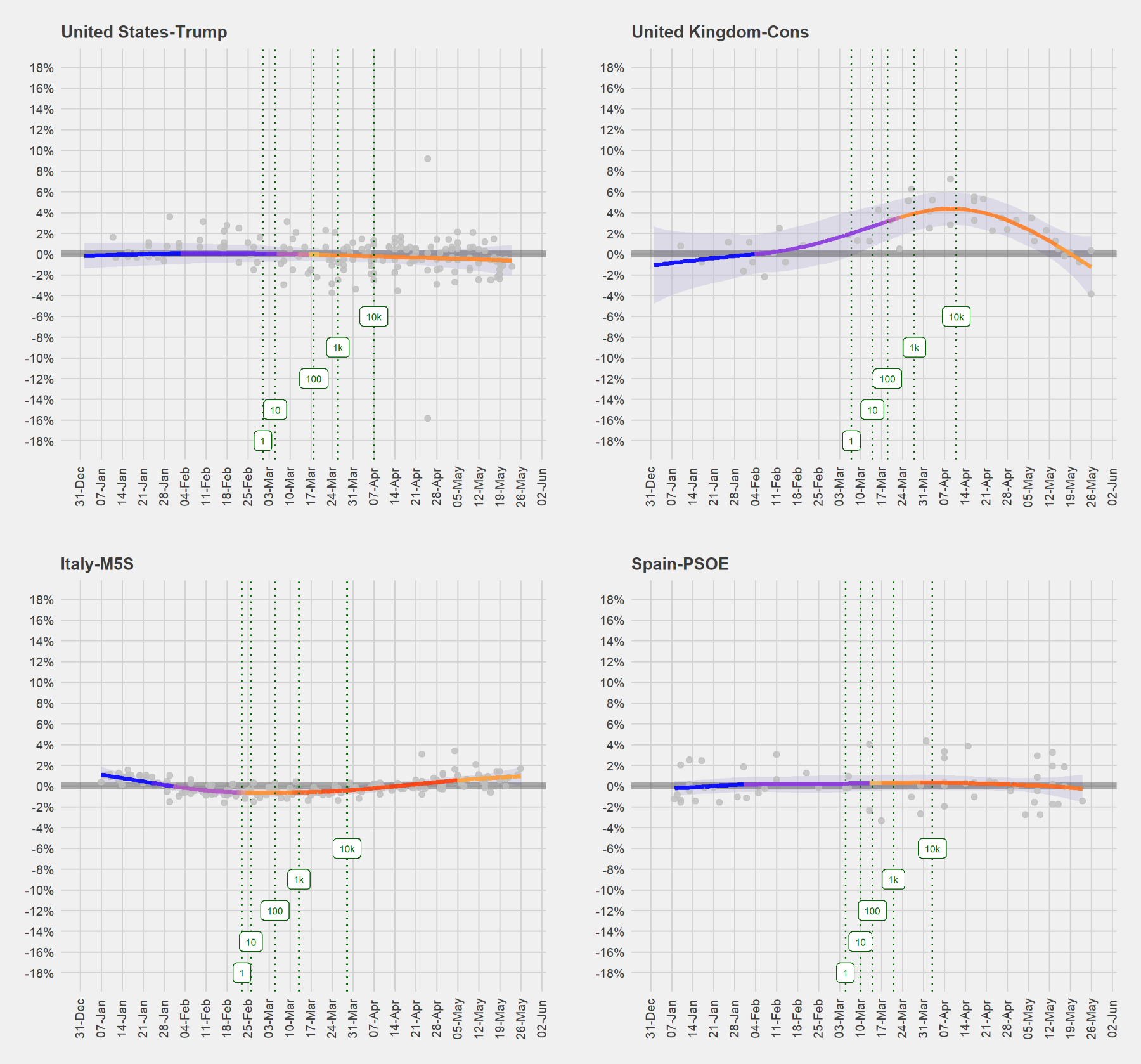 Figure 4: Rally in countries with over 10,000 confirmed Covid-19 deaths

The next set of charts looks at countries in the goldilocks-zone where the threat is significant enough to warrant the attention and support of the populace but perhaps not damaging enough for the government to be openly criticised.

Countries where the number of deaths were between 1,000 and 10,000 reveal the most significant rallies, in the range of 10%, per Figure 5. Figure 5: Rally in countries with over 1k confirmed Covid-19 deaths

This final data – for countries with lower death tolls – is given in Figure 6. 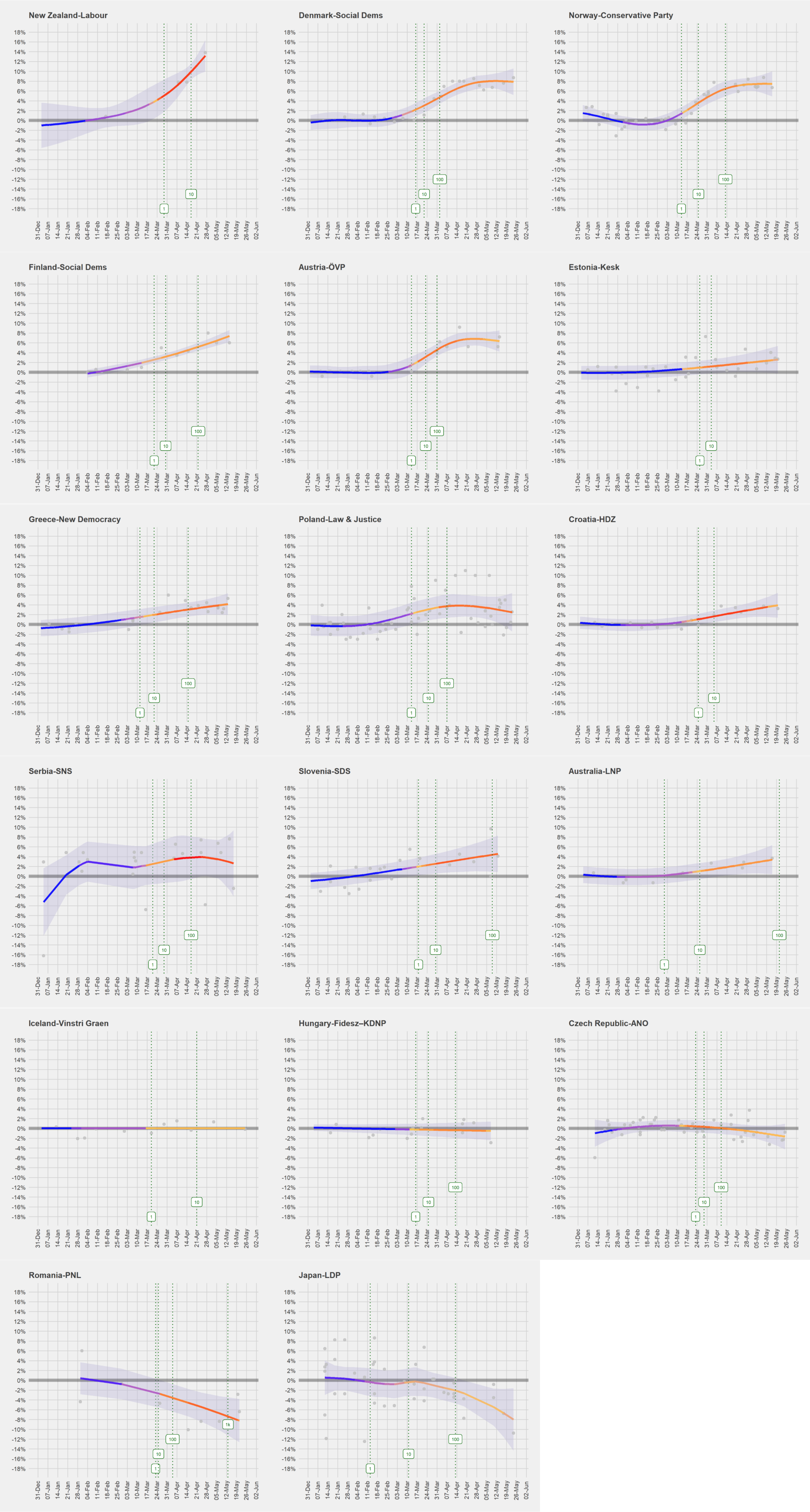 It is of course difficult at this stage to determine fully what drives the scale of the rally round the flag effect produced by Covid-19. Definitive analysis will need the passage of time, distance and more data. However, there is perhaps some, if weak, evidence in support of some of the theories.

One interesting cross-national explanation is based on the individual voter. Some voters – those  more ambivalent, less partisan, and less politically sophisticated – might be more available to rally.

The numbers of these voters that are open to being influenced in such a way will vary by country and by context.

For instance, at the start of Thatcher’s Falkland’s rally in 1982 the Liberal/SDP Alliance was the most popular party in Britain, a reflection of the relative absence of partisan loyalties at that moment in history.

To take another example, of all country-party combinations observed, Ireland’s Fine Gael has the largest rally on a percentage point basis – in part perhaps because the country is currently going through a period of considerable instability and volatility, exemplified by Sinn Féin’s extraordinary performance at the general election one month before the crisis took hold.

The UK – with a volatile electorate increasingly willing to switch their allegiance between elections – has also experienced a similar peak in support. Boris Johnson may also be beginning to see the other side of the equation: if voters are willing to rally to your cause, they may also be quick to abandon you at short notice too.