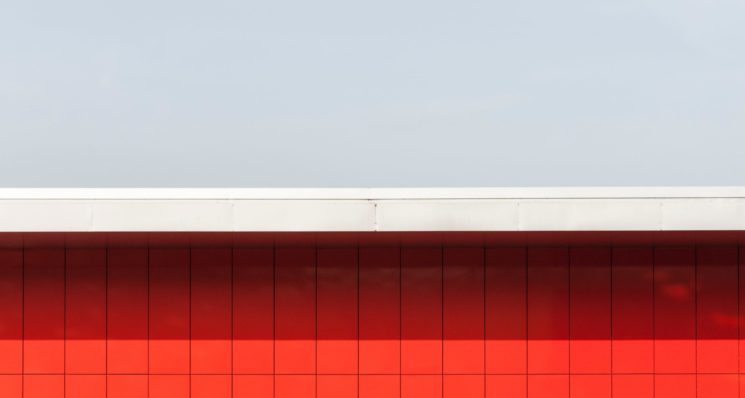 The Conservative party made remarkable gains in ‘red wall’ seats across northern England, the Midlands and North Wales in December’s general election.

These gains delivered the prime minister a commanding majority.

But they have also changed profoundly the composition of the party he now leads. 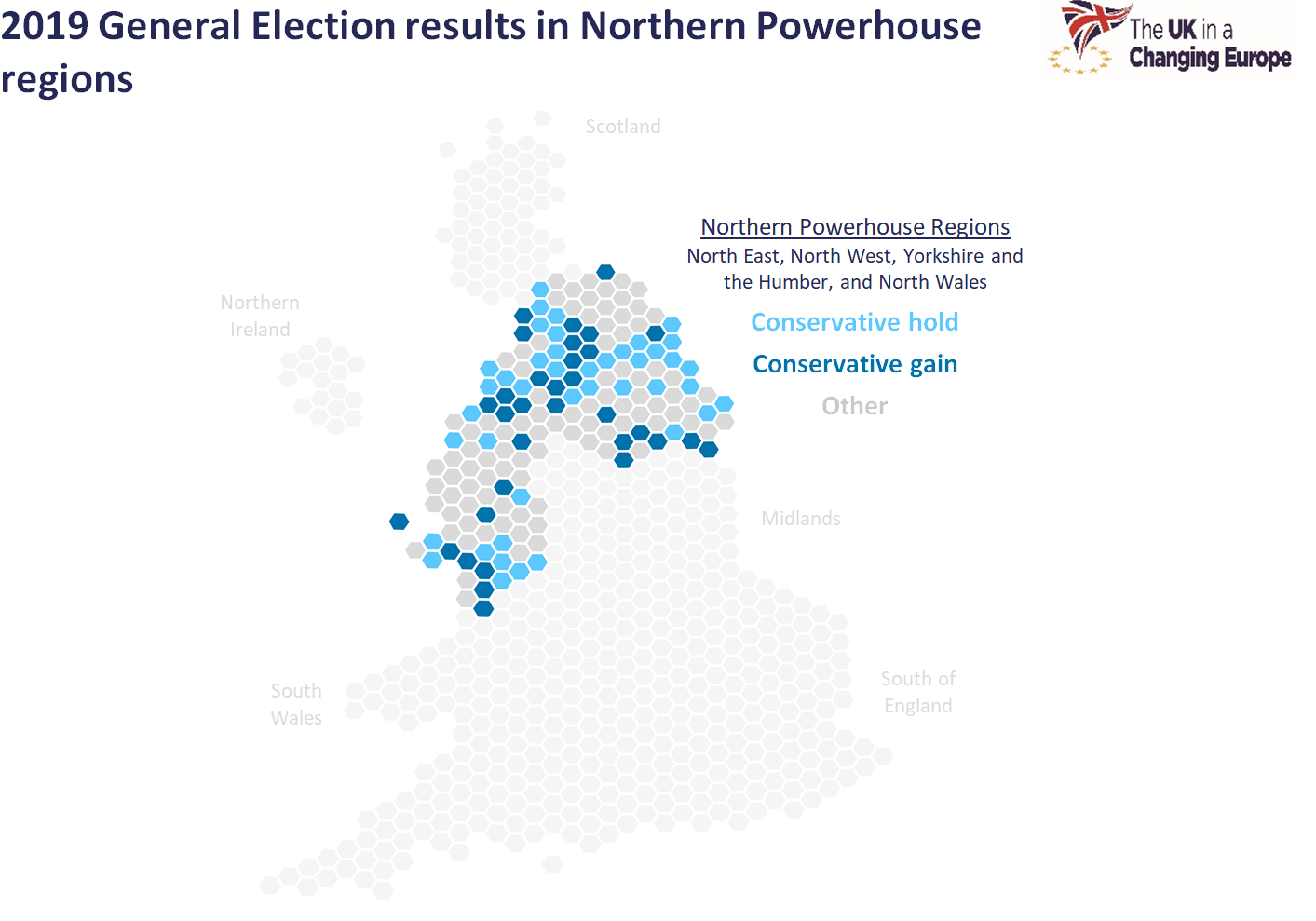 Before the general election, the Conservatives held exactly a quarter of the 168 seats across the Northern Powerhouse regions, consisting of the North East, North West, Yorkshire and the Humber, and North Wales.

Many of these Conservative-held seats were in rural areas, with Labour representing the vast majority of constituencies in the Northern Powerhouse’s cities and towns.

The general election has significantly changed the political landscape of these regions.

While Labour still represents a majority of Northern Powerhouse constituencies, the balance between the two main parties is now more even.

Conservative gains—particularly in towns such as Wrexham, Darlington and Bury—mean that they now represent 45% of the Northern Powerhouse constituencies.

Broken down by region, the Conservatives now hold 70% of the seats in North Wales, 48% in Yorkshire and the Humber, 43% in the North West and 34% in the North East.

Half of the constituencies in North Wales and almost a quarter of those in the North East switched from Labour to the Conservatives in the election.

When the Northern Powerhouse programme began under the Coalition Government, the Conservatives were arguably outside players in these regions.

The new intake of northern Conservative MPs will mean that they now have a much greater political stake in them. 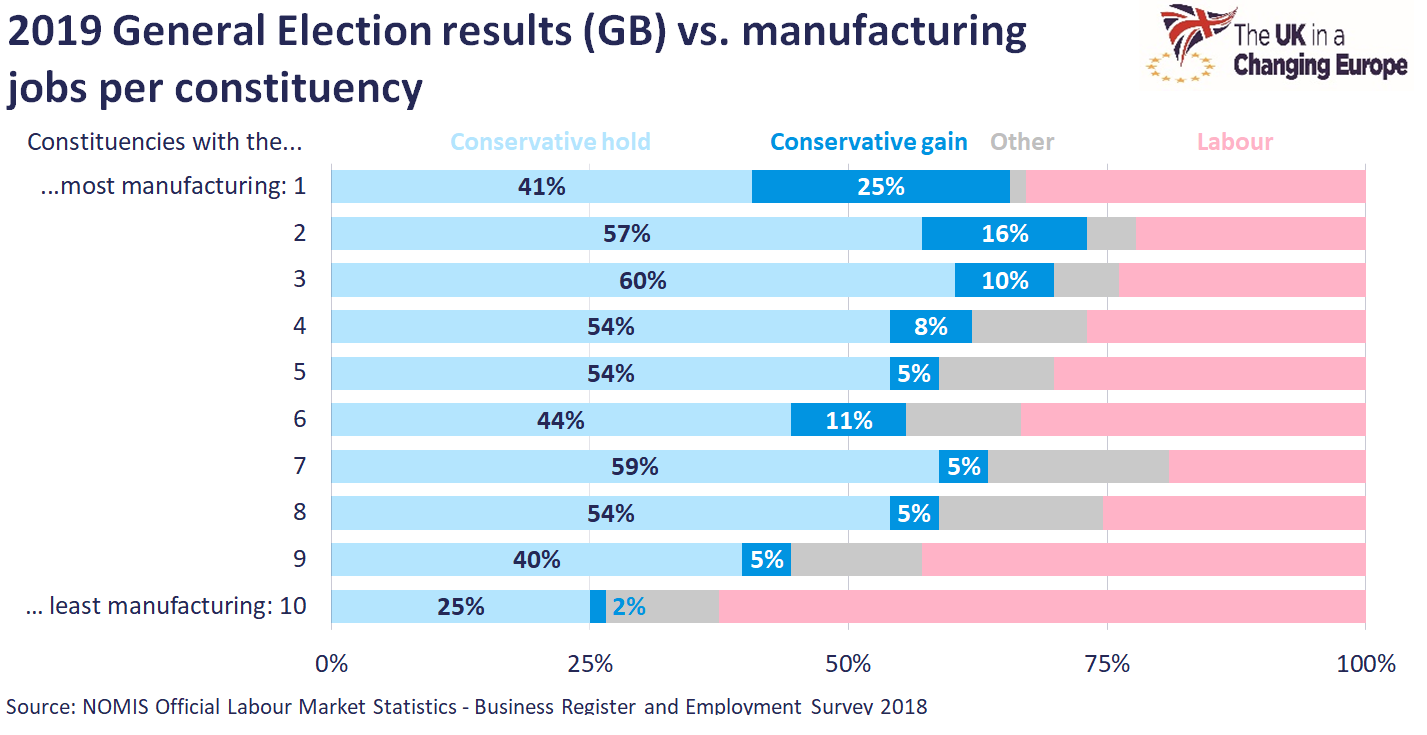 Conservative gains in the general election were also concentrated in the constituencies with the most manufacturing jobs.

In 2017, Labour won a majority of the constituencies with both the most and the least manufacturing jobs—a demonstration of the divergent electoral coalition, between ‘Hampstead and Hull’, that the party was trying to hold together.

However, in 2019 Labour’s electoral coalition fractured, notably in the ‘red wall’, with the Conservatives making significant gains in more industrial seats.

A quarter of the seats with the most manufacturing jobs—including Sedgefield, Dewsbury, and Barrow and Furness—switched from Labour to the Conservatives, adding to the 41% of these seats that were already Conservative held.

Contrary to popular belief, the Conservatives did represent many manufacturing-heavy places before the election, but now they hold two-thirds of the seats with the most manufacturing jobs.

Labour, on the other hand, have retained their dominance in the constituencies with the least manufacturing, losing only one seat—Kensington—to the Conservatives.

Food, metal and car production are most important in new Conservative-held seats 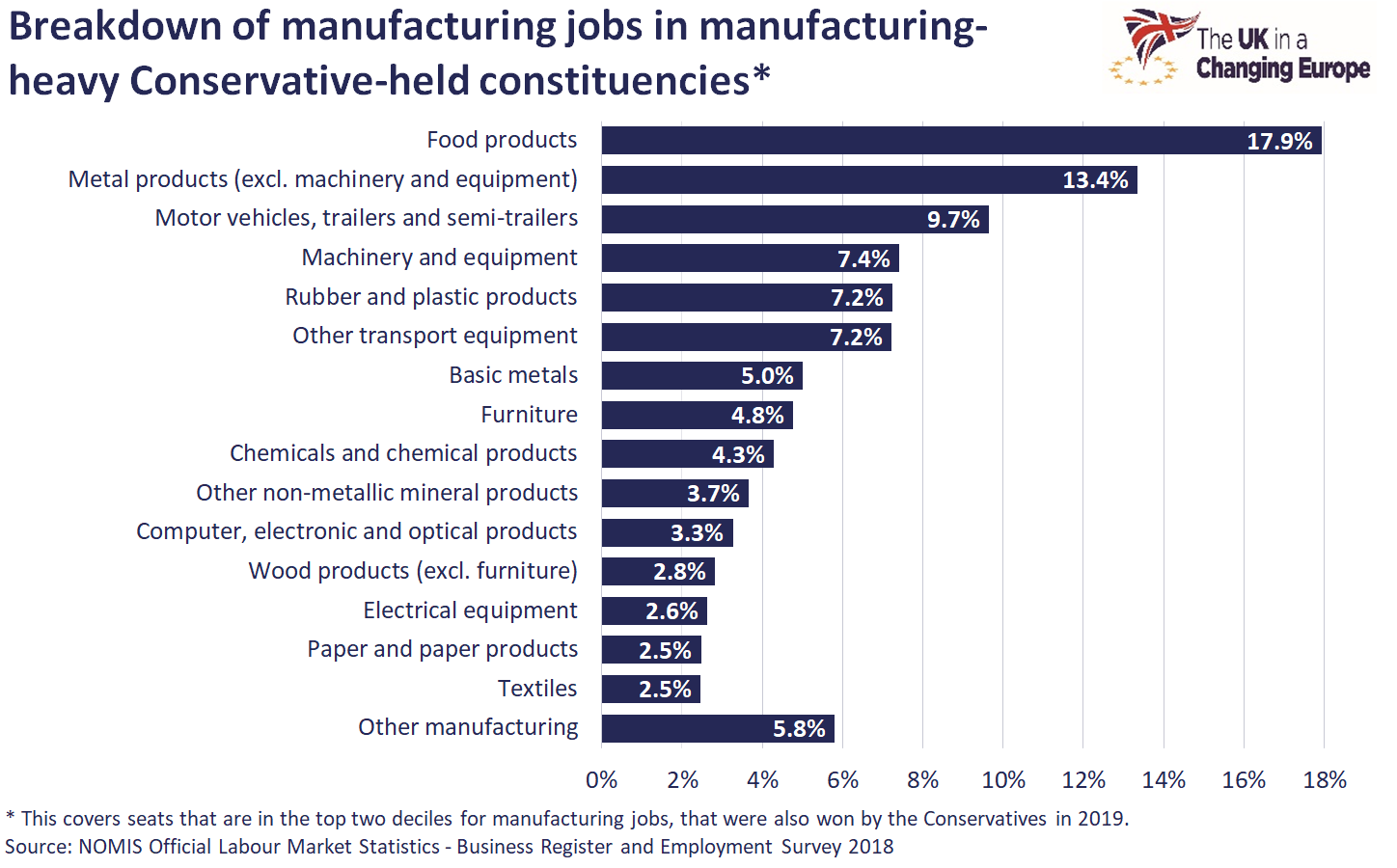 In the Conservative-held seats with a heavy concentration of manufacturing jobs, the food, metals and motor vehicles sectors stand out as being particularly important.

This has significant implications for the political priorities of the party in terms of the future relationship with the EU.

The UK’s manufacturing industry body—MAKE—has said that the two fastest-growing UK export sectors in terms of value are food and vehicle production, with the North West, where the Conservatives now hold 43% of the seats, the biggest region for manufacturing output.

The impact of a future relationship with the EU that increases barriers for trade—something the chancellor has suggested businesses will simply have to ‘adjust’ to—has substantial implications for many of the seats the Conservatives have recently taken.

The Conservatives gained many seats that stand to benefit from HS2 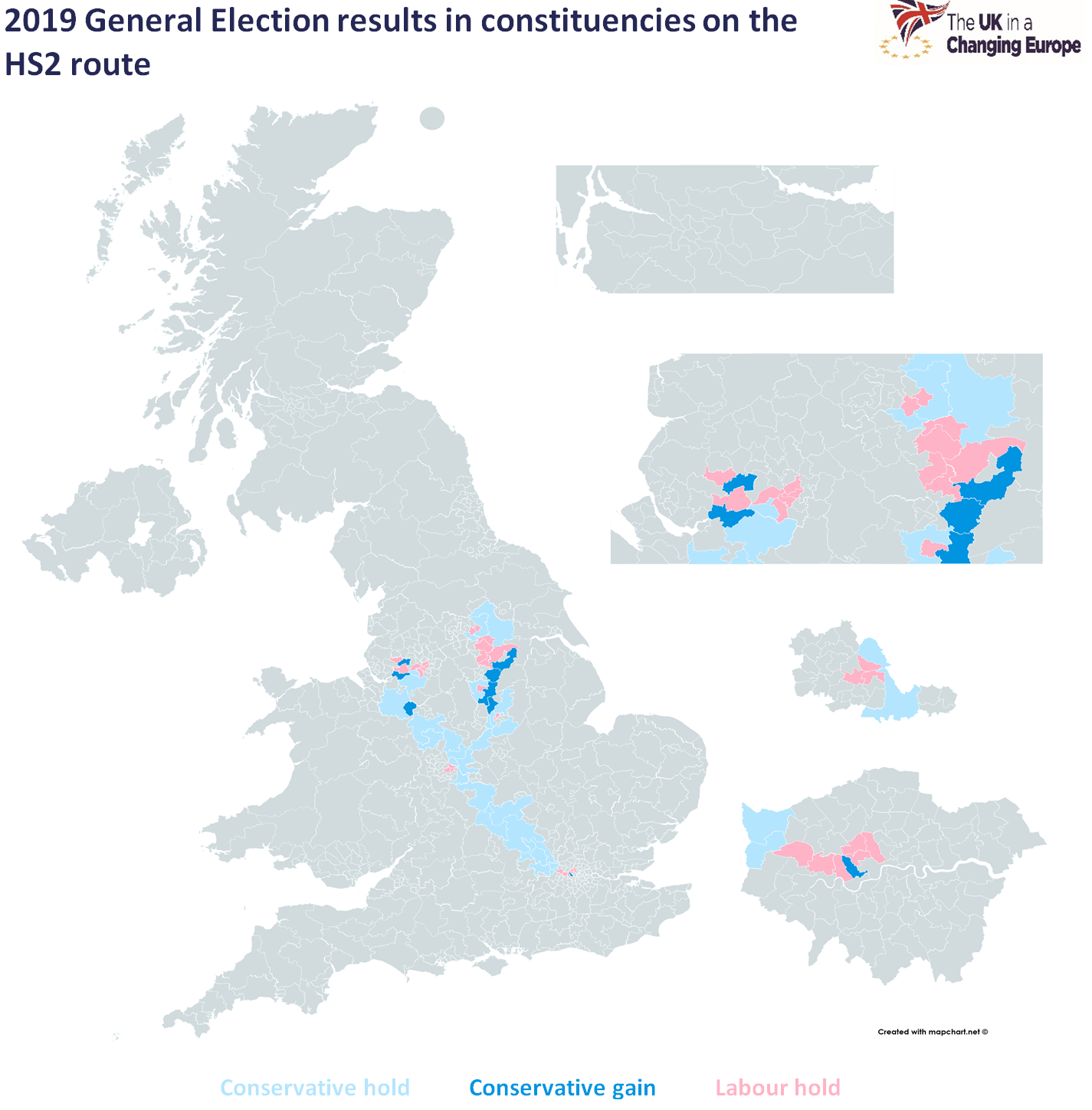 The new planned high-speed rail line (HS2) is also high on the political agenda, with reports that the project could even be shelved.

In the election, the Conservatives gained eight additional seats along the HS2 route, adding to the 29 it already held.

This means that 60% of constituencies on the HS2 route, and 83% of the route itself, is now Conservative territory.

The party has officially supported the project in government over the past decade, but this has drawn strong opposition, particularly from Conservative MPs who represent constituencies along the route.

However, the gains that the Conservatives made in 2019 are typically closer to where new high-speed trains would stop, rather than simply pass through, meaning they could stand to benefit more from the project.

Johnson’s victory created an unprecedented coalition for the Conservatives. The task now, as he has recognised, will be holding on to it.

Doing so will require him to speak to constituencies in the ‘red wall’ that are very different—geographically and economically—to those the party has represented in the past.

By Aron Cheung, and Matt Bevington, researchers at The UK in a Changing Europe.