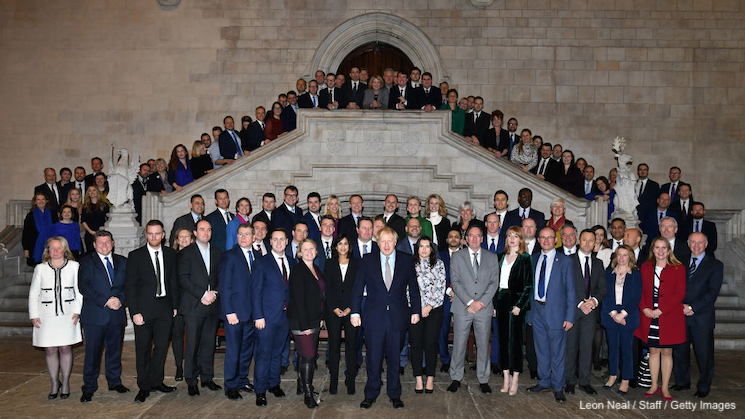 Table 1 The Conservative parliamentary party by position taken in the EU referendum, 2016-19

The number, and proportion, of Conservative MPs who voted Remain has fallen. Some 48 of the 52 MPs who were elected for the Conservatives in 2017 but did not stand for the party in 2019 had backed Remain.

Indeed, 17 were no longer in receipt of the Conservative whip at the dissolution of parliament – having either defected, resigned the whip or had it removed – and eight of them stood unsuccessfully for other parties or as independents.

Meanwhile, many MPs have changed position since 2016. Most Conservative MPs who voted Remain subsequently accepted the referendum result and voted for the Withdrawal Agreements tabled by Theresa May and Boris Johnson. Indeed, some ‘reluctant Remainers’ now appear every bit as committed to Brexit as those who campaigned to Leave.

The increasing (and increasingly hard) Euroscepticism of the parliamentary party was not reflected in the composition of the Cameron and May governments (see Table 2). Nor, Eurosceptics argued, was it wholly reflected in policy even after the 2016 vote to leave the EU, which helped drive the record levels of Conservative dissent on the issue in the 2017-19 parliament.

Under May, some 180 Conservative MPs defied the whip on Brexit votes, the largest rebellion (118 MPs) coming on the first ‘meaningful vote’ on her Withdrawal Agreement in January 2019. 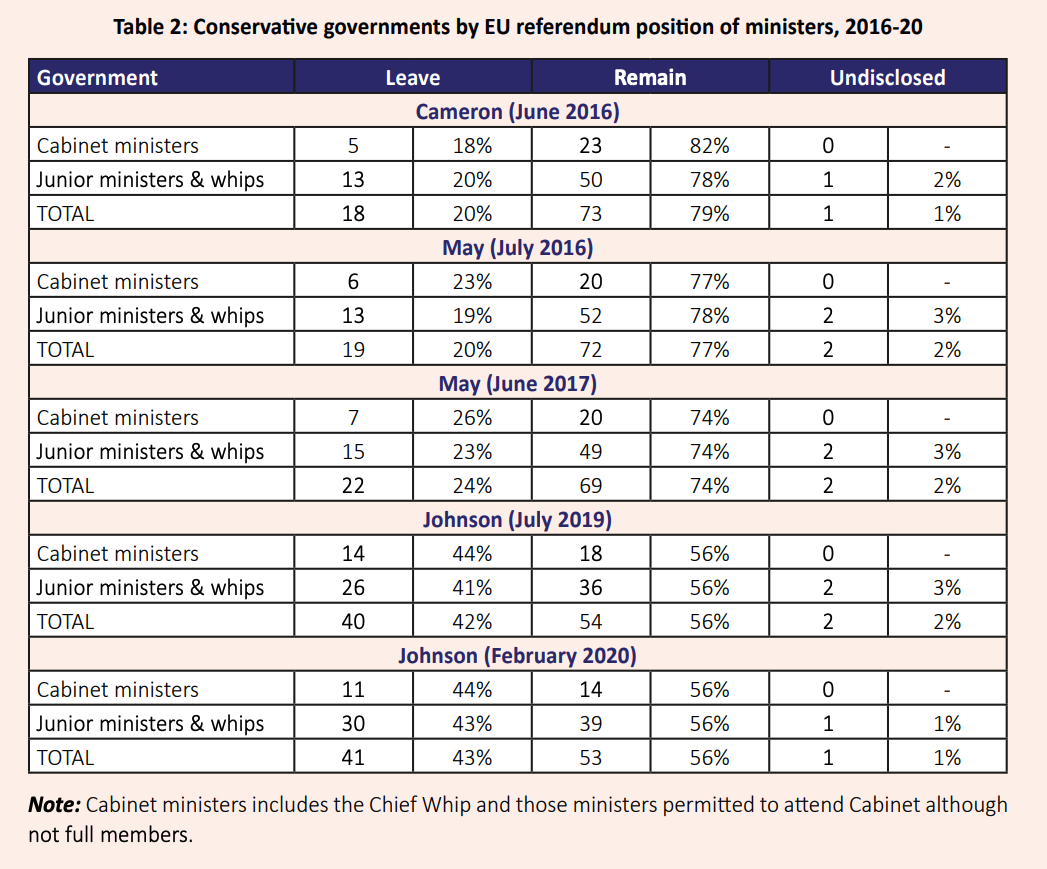 But under May’s successor, things changed fairly rapidly. The 28 ‘Spartans’ from the European Research Group (ERG) who voted against May’s deal three times backed Johnson’s deal, arguing that it removed the Northern Irish backstop, signalled future divergence from rather than alignment with the EU, and introduced new protections during the transition period.

Meanwhile, Johnson initially required ministers to agree that the UK would leave the EU with or without a deal by 31 October 2019, and some Leave-supporting MPs who had resigned under May returned to the frontbench.

Any change, however, has been far from wholesale: although Johnson’s February 2020 reshuffle placed Leavers in key government departments, it will inevitably take some time before newly elected Eurosceptic Tories reach ministerial rank.

Nevertheless, dissent has been muted in the early stages of the new parliament. All Conservative general election candidates pledged to support Johnson’s deal and the European Union (Withdrawal Agreement) Bill duly passed without a single Conservative rebellious vote being cast in the House of Commons.

Having left the EU, the government aims to lower the salience of Brexit issues and focus elsewhere. Loyalty to Johnson and hopes of future promotion should also help to keep new MPs in line.

Tellingly, perhaps, while the European Research Group (ERG) recruited new members from the 2019 cohort – 25 of whom signed the Stand up 4 Brexit pledge backing ‘no deal’ should Johnson’s deal fail – the group has lowered its profile.

And while the One Nation Conservative parliamentary caucus has also seen an increase in membership, it, too, has sought to defuse the Brexit issue and its latest declaration of values makes no mention of Europe.

Majority government in any case arguably offers fewer opportunities for game-changing dissent on core Brexit questions, not least because clauses relating to parliamentary scrutiny were removed from the post-election version of the Bill (e.g. on approval of the government’s negotiating objectives), and parliament has a limited role in overseeing new treaties.

That said, Conservative dissent may well return – albeit in less dramatic fashion, and with a majority government better equipped to absorb it – when final decisions about the future UK-EU relationship are eventually taken.

Should no free trade agreement be in the pipeline as the transition period nears its end in December 2020, for example, we can expect a return to conflict between ERG stalwarts and ‘soft’ Brexiteers over leaving without a deal.

In contrast to 2017-19, however, parliament’s limited role in approving the future relationship means that the two sides would have little more than heated debate at their disposal – though this could still prove embarrassing for the government.

Tensions may also arise over specific issues such as tariffs, fisheries and financial services. There is still more detailed Brexit legislation to come – to which concerned MPs could choose to table amendments.

Conservative divisions over Brexit-related issues are also likely to develop a more pronounced constituency dimension. The diversity of seats represented by Conservative MPs is even more apparent since the general election, and MPs will come under pressure from local employers across different economic sectors who experience Brexit in different ways.

Notably, the economic costs of a harder Brexit are most likely to be felt in those regions where the Conservatives made gains in 2019.

Hence steering a course between constituency and party demands could prove difficult for some Conservative MPs. Smooth sailing from here on in, then, is by no means guaranteed.

By Philip Lynch, Associate Professor in Politics at the University of Leicester. This piece forms part of our Parliament and Brexit report and was originally published by Conservative Home.