The revenge of ‘the places that don’t matter’? 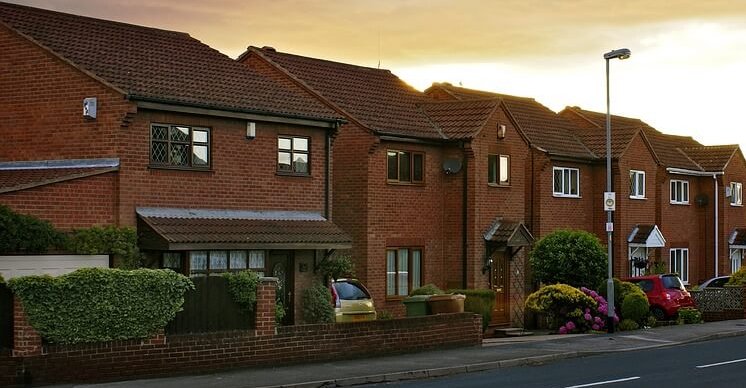 Brexit revealed a stark difference not only between people, but also places. The major cities of the UK voted heavily for Remain, while less urbanised areas tended to vote for Leave.

This divided politics reflects not only a difference of identities and cultural outlook (described by some as a ‘cultural backlash’), but also long-term forces of social and economic change that have put places on different tracks.

This has left people in different areas living worlds apart in terms of their attitudes, experiences, and expectations for Britain post-Brexit.

And this is having political consequences – dubbed the “revenge of the places that don’t matter” by Andrés Rodríguez-Pose – and presents substantial challenges for policy-makers at national and local levels as they seek to address the conditions that gave rise to the referendum vote as well as those that may be created by Brexit itself.

Changes in the demographic composition of our towns and cities are contributing to the geographical polarisation of British politics. Brexit has put this divide firmly in the spotlight, but was hardly the cause of it.

Analysis produced by the Centre For Towns, depicted in Figure 1, shows how the populations of towns and cities have moved apart dramatically since the mid-1990s.

Old-age dependency – the number of over 65s per 100 people of working age – has decreased in cities but increased markedly in towns and villages.

These trends are being complemented by internal and external migratory trends, the gravitational pull of the forces of agglomeration on jobs and economic activity and a population that is living longer thanks to advances in healthcare.

The expansion of higher education since the 1990s has led to growing numbers of younger people leaving home and, after university, seeking jobs and settling in or near cities and large towns where skilled jobs are increasingly located.

Non-graduates face a similar dilemma as to whether to move to major towns or cities where jobs and business opportunities are clustered.

Over the same period, rising immigration has seen an inflow of people who are younger and more economically active than average, which has been similarly concentrated in cities. 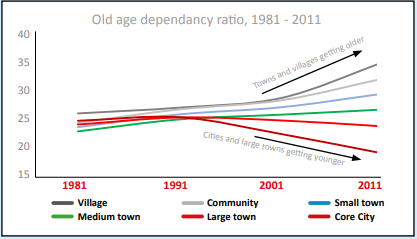 Brexit and the politics of decline

Combined with what we know about social attitudes, these dynamics create an increasingly bifurcated politics.

The younger, more educated, and more ethnically diverse populations of cities tend to be more socially liberal, pluralistic in their identity and relaxed about social change, particularly immigration.

In contrast the populations of towns and rural settings are more prone to nostalgia and uneasy about immigration, and tend to be socially conservative in their views.

It is hardly surprising, then, that the heartlands of Brexit were smaller towns and more rural areas, the same areas where the Conservative Party has tended to make electoral gains in over the past decade. Labour, for its part, has made significant advances in cities.

To paint Brexit as simply the product of concern about immigration or a nostalgic reflex hugely simplifies how people have experienced social and economic change over several decades – and the forces that gave rise to distrust of the ‘political class’.

In the US, work by Kathy Cramer has found that place-based identities play a crucial role in shaping political division, specifically in the case of resentment among rural communities of the ‘liberal elite’.

A recent study of the Brexit vote by Neil Lee, Katy Morris and Thomas Kemeny showed that local rootedness (measured as people living in the county where they were born) was a factor in areas that have experienced either relative economic stagnation or higher rates of immigration.

It is possible to analyse patterns of voting in the EU referendum by the relative rate of decline that places have experienced in terms of human and economic capital. To do this, we use a measure adapted from Andy Pike et al. (2016) and the Joseph Rowntree Foundation.

It uses indicators designed to capture the rate of population growth (or decline), economic activity (or inactivity), and the inflow of younger, more educated workers – critical factors for success in the global economy.

It also includes declining employment in manufacturing, to capture the hollowing out of traditional industries.

We rank areas – using the counting areas for the EU referendum – based on these indices over the thirty-year period from 1981 to 2011.

The geographical distribution of this measure across Great Britain is plotted in Figure 2, and tells a stark story of citification – with large cities seeing less decline than large coastal and rural areas and post-industrial hinterlands. 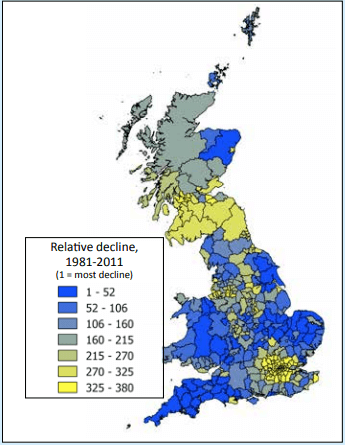 Most of the fast-growing areas are found in cities (such as London, Glasgow, Liverpool or around the South East or East near London), while many of the declining areas are coastal or former mining and manufacturing areas.

This measure of relative decline also corresponds to patterns of voting in the 2016 EU referendum. Figure 3 plots the Remain and Leave vote share for each area against its ranking of relative decline. This reveals a striking pattern.

On average, the Leave vote was 20 points higher in those places that have experienced the greatest declines in terms of human and economic capital. 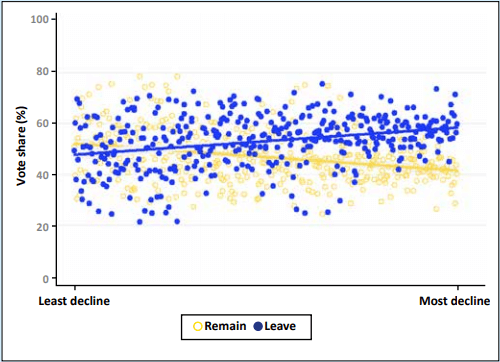 These long-term forces of social and economic change present major challenges for policy makers. This is exacerbated by some of the confident promises that were made during the referendum campaign.

Whatever people voted for, these economic and demographic trends point to choppy waters ahead.

Due to ageing populations, towns and villages will face increasing pressure on the NHS and social care. Many of these areas have already witnessed deterioration in their public services – closures of local A&E departments and public libraries, and cuts to bus services.

The geographical impact of Brexit itself remains subject to some debate. According to some studies, such as the work of Andrew Carter, those areas most integrated in the global knowledge and service economy (the cities that voted heavily for Remain) will be worst hit.

Alternatively – as Chloe Billing, Philip McCann and Raquel Ortega-Argilés allude to in the Local and Devolved Government report – areas with a manufacturing base (the large towns that tended to vote to Leave) will suffer most from exiting the EU’s free trade area.

There is a possibility, at least, that Brexit will exacerbate the relative decline experienced in places that voted most heavily for it. They say revenge is a dish best served cold. Those Leave areas that registered a protest against the status quo could find Brexit means things get even chillier.

By Professor Will Jennings, Professor Gerry Stoker and Ian Warren who are part of the Centre for Towns. You can find a full copy of our Brexit: Local and Devolved Government report here.