The role of immigration in the UK’s post-Covid recovery 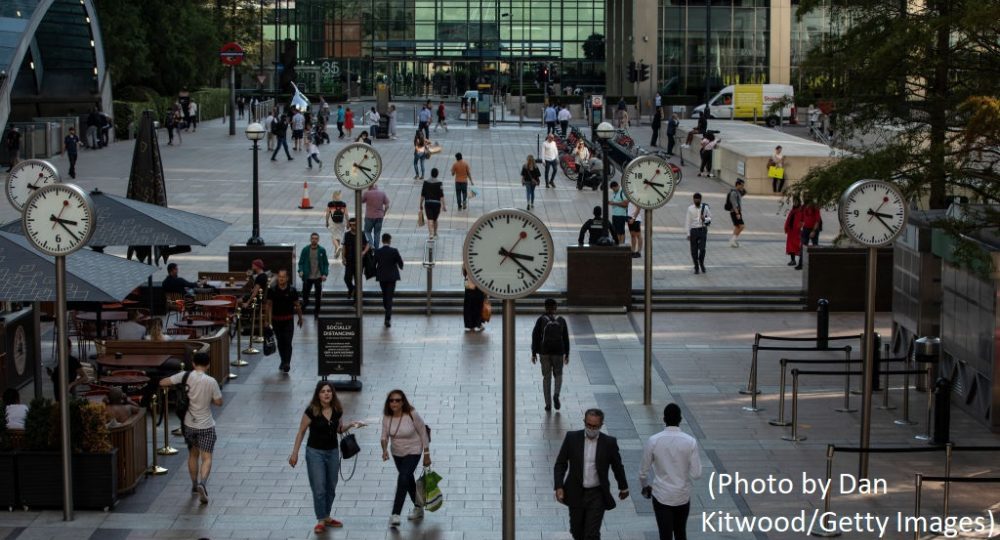 While much about Brexit is still uncertain, what is definite is that free movement is ending.

From 1 January a new, points-based system will require visa applicants to have an offer of a skilled job, at a salary of at least £25,600 and be able to speak English.

This will place tight restrictions on lower skilled migration, with the IPPR recently estimating that more than two-thirds of the UK’s current EU migrants would not have scored sufficient points for a new, skilled visa.

From before the referendum and ever since, employers and academics among others have warned that cutting off a supply of labour to sectors such as hospitality and construction would harm the economy.

But employers are now preoccupied with the pandemic and saying little about the imminent end of free movement.

But there’s also a view that economic recession will loosen up domestic labour supply and employers will no longer need to cast their recruitment nets beyond the UK’s shores.

The same was said by Labour’s Minister for Immigration during the last economic crisis in 2008, yet migration played a key role in recovery.

With just weeks to go before the end of free movement, what lessons can we draw from this for future immigration policy?

Unemployment, during and beyond the pandemic

The pandemic and lockdown have led to large-scale job loss. According to the ONS, since March 2020 the number of payroll employees has fallen by 782,000 and redundancies were a record high of 314,000 in the three months to September 2020.

The lack of previous experience of a pandemic and the speed of vaccination makes it hard to predict unemployment with any accuracy.

The impact of Brexit also needs to be factored in, with the OECD predicting it will make the UK’s recovery more sluggish than elsewhere.

Regardless of the speed of recovery, it will be patchy, with sectors and regions recovering at different rates.

PwC anticipates that most sectors will return to growth in 2021, including hard hit sectors like retail and hospitality but also the construction sector, partly driven by measures to boost infrastructure investment.

The logistics sector is likely to recover more strongly, accelerated by a lockdown online commerce boom.

The relevance of this for migration is that after the 2008 recession the UK saw a big expansion in sectors such as hospitality, retail and construction.

The scale of recovery made it difficult for some employers to recruit locally. They turned to migrant labour to fill gaps, often for the first time.

Why weren’t employers able to fill the gaps with British workers? As labour market research frequently finds, it’s not just a simple matter of matching the unemployed with vacancies: unemployment rates vary by location and the unemployed may lack the necessary skills, attributes and ability to take up available jobs.

Shortcomings in our transport and housing systems restrict many workers from moving to where the jobs are.

Hiring migrants to help economic recovery had not been the plan during the last recession. Gordon Brown used the slogan ‘British jobs for British workers’.

Immigration Minister Phil Woolas argued for a cap on migration to keep down population numbers and address unemployment. And in 2008 the first ‘points-based’ system was introduced.

What Labour and subsequent governments were unable to do was to restrict free movement.

For employers this was just as well: as it turned out, migration increased alongside wider employment growth and economic recovery.

Migration grew substantially from 2011, particularly from the EU8 member states: migrants who had left at the peak of the crisis returned, and others came to take up vacancies which British workers could not fill. 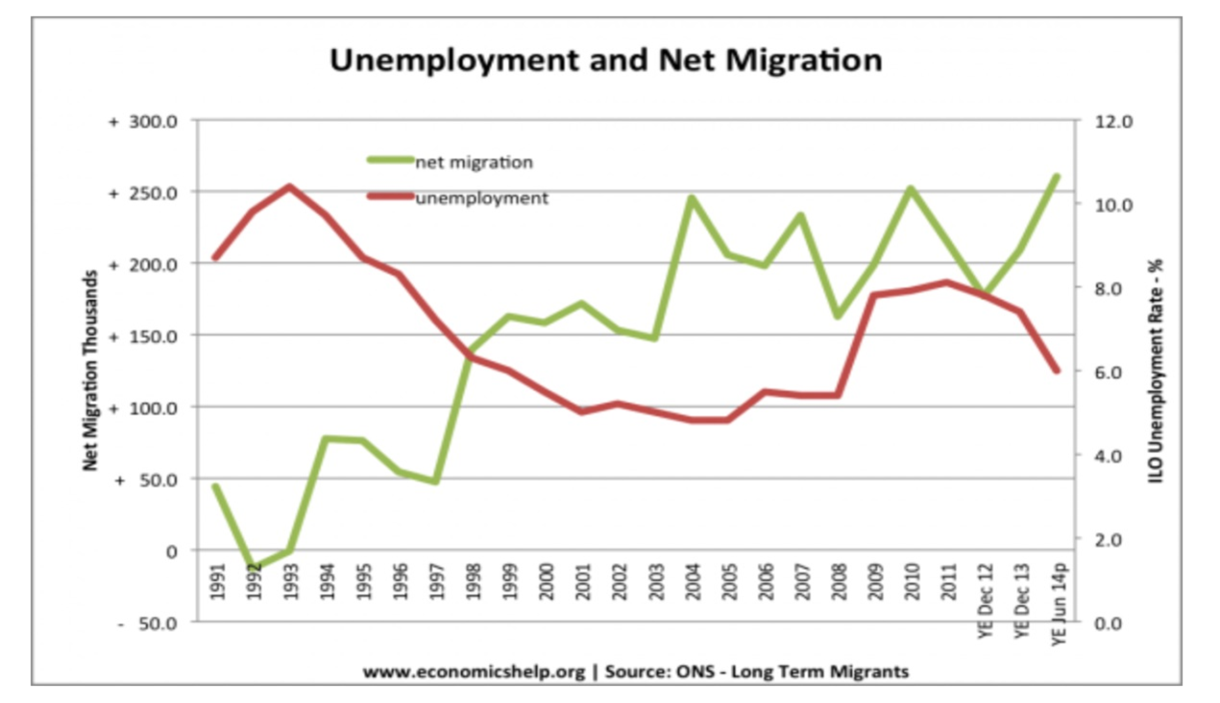 The chart above shows unemployment increasing year on year from 2008 to 2012, reflecting the long period of economic recovery.

As the chart below shows, this increase was fuelled by EU migration, which went from accounting for just a quarter of net migration in 2009 to three-quarters in 2013. 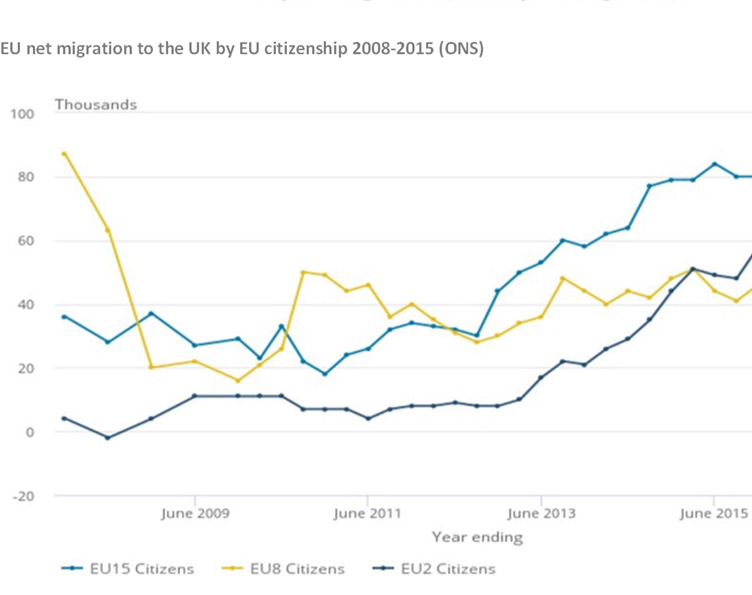 Would recovery and growth have been as strong without immigration?

It seems unlikely. Not only was there little evidence that migrants were taking ‘British’ jobs, they also bought goods and services, boosting the economy and creating new jobs. Some had complementary and niche skills, driving innovation and productivity.

Areas of the country with the highest increases in EU migration saw neither the sharpest falls in employment nor in wages.

Restricting immigration could put the brakes on recovery

What then will be the impact of the new restrictions on immigration? It’s likely that once the economy hits the recovery stage, in 2021 or 2022, employers will experience the same recruitment difficulties they’ve had in the past. But they won’t have the free movement safety-net.

Shortages will be felt in particular sectors where the supply of UK workers has been particularly problematic – including hospitality, social care, agriculture, construction and food processing.

These will have knock-on effects, with shortages in construction in particular impeding recovery. In sectors such as social care, they could have wider, social, impacts.

To prevent labour shortages putting the brakes on economic recovery, flexibilities in the new immigration policy need to be considered sooner rather than later.

Migration can’t simply be switched on and off: there are migrants’ own choices and plans to consider.

The UK has seen a dramatic fall in EU migration: indications from recent visa applications, National Insurance registrations and Labour Force Survey data are that the downward trend since June 2016 has continued.

Most migrants don’t read the policy small print, but they know free movement is ending, the UK is in recession and they’re seeking opportunities elsewhere.

This is happening almost unnoticed, but will create difficulties for key sectors as the UK begins to recover from the pandemic.

We can expect to be talking about immigration again before too long. This time we also might need to be better listeners too.