The shadow of John Bercow 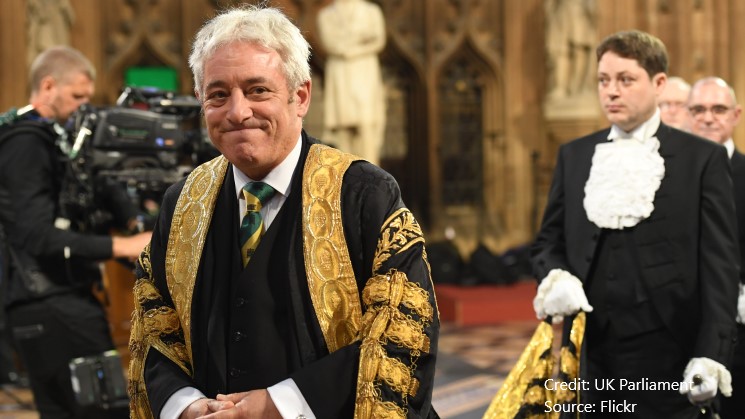 On Tuesday, 15 October, nine MPs spoke in Portcullis House about their vision for the House of Commons at the hustings to replace the current Speaker, John Bercow.

In the debate, every candidate praised Bercow’s achievements, yet each of them also noted (or at least implied) that they would do things differently.

Parliament was rocked by the scandal, and trust in politicians was at an all-time low  – indeed, as this book sets out, the legacy is still being felt today.

Bercow sought to win support from MPs in becoming Speaker to embark on a modernisation programme, and in the end persuaded 322 MPs to vote for him (against 271 votes cast for the other final candidate).

From the beginning of his tenure, Bercow began to implement some of the proposals that were suggested to him (for example, see this list produced by the House of Commons clerks), including making greater use of Urgent Questions and increasing the external role of the Speaker.

While it is impossible to give a full account of the impact of John Bercow’s tenure, I return to the three core themes of the role of Speaker above (the chairing, managerial and outward-facing roles) to give a brief insight into what impact Bercow seems to have made.

First, Bercow’s role as chair in the chamber. The Speaker decides who can speak in debates and who can ask questions of ministers. Importantly, the Speaker selects amendments to bills and motions.

Speakers have some principles that they follow (e.g. the level of cross-party support for, or the orderliness of the amendments), but this can attract controversy.

Bercow, for example, has allowed extra amendments to the Queen’s Speech in both 2013 and 2017 (normally only two amendments are debated; in those cases, it was three), and both times his decisions arguably had repercussions for the government.

In 2013, he gave extra time to debate a proposed referendum on membership of the EU; in 2017, the amendment allowed for debate on abortion rights in Northern Ireland.

In January 2019, he also allowed an amendment to a business motion (using a novel interpretation of Commons rules) that significantly hampered Theresa May’s room for manoeuvre back when she was trying to navigate the choppy Brexit waters.

John Bercow’s use of two powers – the ability to grant urgent debates and recall ministers to answer Urgent Questions (UQs) – has significantly reasserted the power of parliament over government.

Most recently, Bercow has allowed urgent debates to give MPs an opportunity to ‘take back control’ of the order paper in the House, leading MPs to pass the Benn Act that has reshaped the course of Brexit.

Some candidates to take over from Bercow have already promised to reduce the number of and/or the amount of time devoted to UQs, which take precedence over other business in the House and lengthens the parliamentary day.

Other candidates have also spoken about offering a different style in the chair.

His work here has come under pressure in various ways, including in 2014 when he controversially sought to replace the Clerk of the House of Commons with an external candidate, leading to a wider governance review, and, more recently, when Dame Laura Cox published a report in October 2018 that highlighted a culture of bullying and harassment that has cascaded ‘from the top down’.

Until a new Speaker is elected, it is difficult for the House of Commons to address this deep-seated problem.

While all candidates have said that they wish to change the culture of the House, the real test will come once they are elected and the persistence they then show in changing parliamentary practices.

Finally, turning to the third role, Bercow has done much to increase public engagement and outreach activities of parliament (though it started well before his tenure began).

He has increased the number of schoolchildren visiting parliament and presided over the creation of parliament’s innovative Education Centre, and has also been a vocal supporter of a Parliamentary Studies module whereby universities teach students about the role of parliament in conjunction with the Houses of Parliament.

More generally, Bercow has been a considerable part of the public face of parliament in recent years, though there are still lots of questions about who can or should speak ‘for’ the institution of parliament.

All candidates have praised Bercow’s record and voiced their commitment to further outreach.

While John Bercow has played a critical role in Brexit since at least 2016, his impact on the House has been much deeper.

As the longest-serving post-war Speaker, he casts a big shadow across all three core functions of the office and the new Speaker, to be elected on 4 November, will have a daunting task.

Professor Sarah Childs, author of The Good Parliament report, has called on the new Speaker to address the diversity challenges of the House; elsewhere, the chair of the Public Administration and Constitutional Affairs Committee argues that the next Speaker should work more closely with her or his deputy speakers, and hinted that their decision-making should be more transparent.

Indeed, to date there are preciously few ways to hold the Speaker to account, often relying on Points of Order in the chamber for which he may or may not be present.

So, the new Speaker faces significant challenges, not only in terms of chairing debates over Brexit, but also in dealing with a tense relationship with government generally, rebuilding trust in parliament by the public, reforming the culture of the House of Commons to redress low morale among its staff, and much more beyond this.

By Dr Marc Geddes, Lecturer in British Politics at the University of Edinburgh, and Convener of the Political Studies Association Parliaments Group.