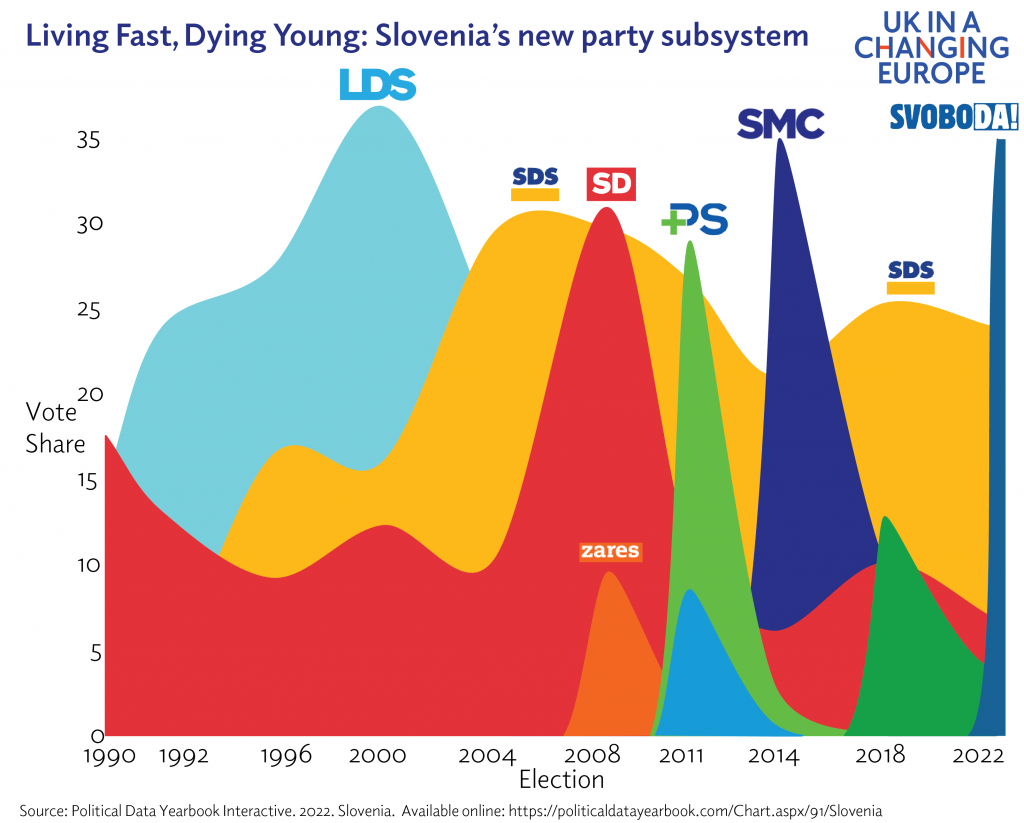 Last Sunday observers of European politics were mostly focused on the French elections, but arguably another national election in an EU member state – Slovenia – has much more to tell us about the dynamics and evolving trends of party politics in Europe.

For those not familiar with its politics, the 2022 Slovenian election result must seem miraculous. The clear winner, the Freedom Movement, created just months ago, took 35% of the vote, 10% more than any other party. Its leader, Robert Golob, until recently the manager of an energy trading company with a few brief forays into national politics, will be the new prime minister.

The Freedom Movement’s success is both striking, but also not as surprising as it might at first appear. 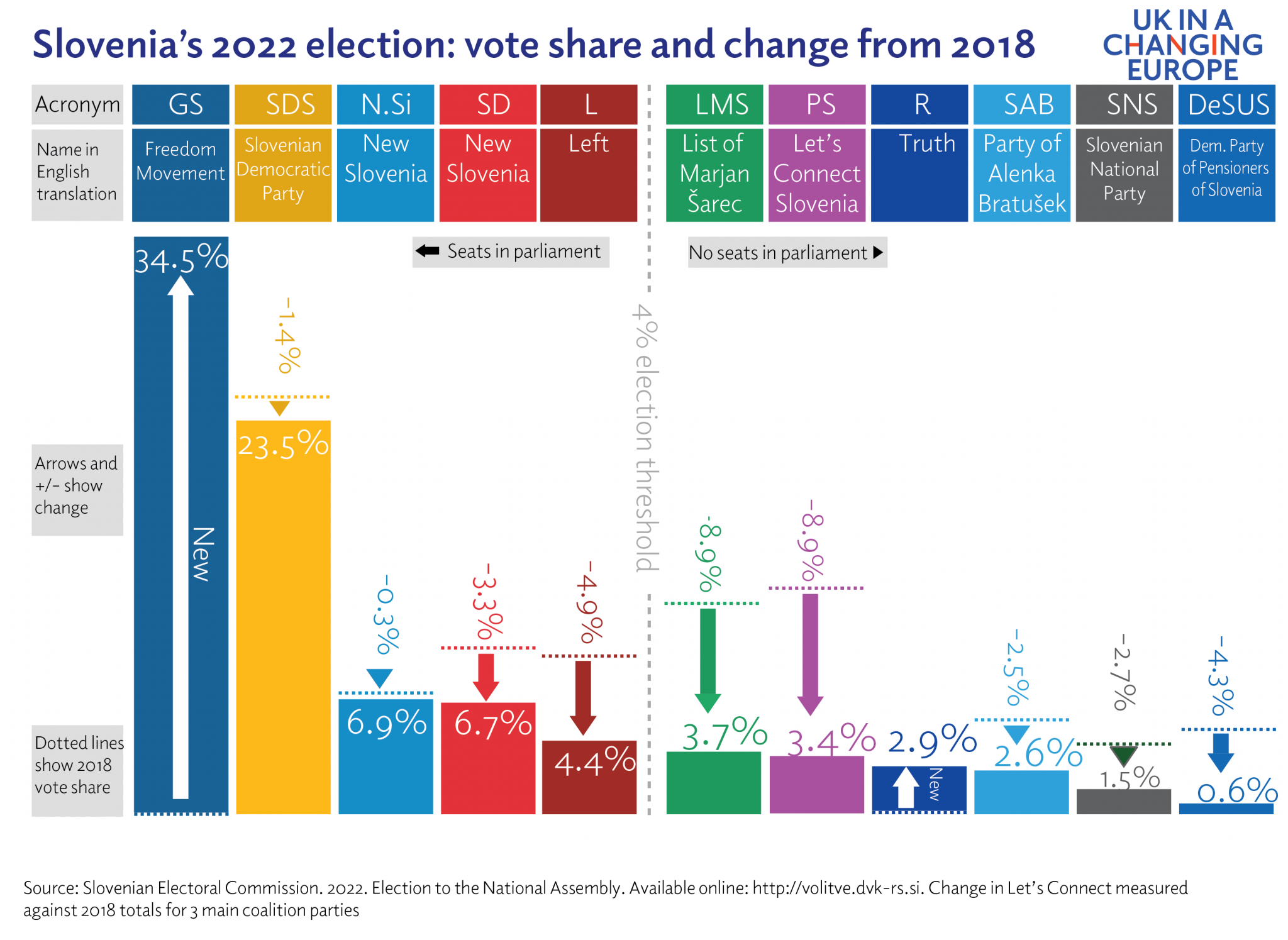 In each election of the last eleven years, a major new party has reshaped the political landscape before quickly falling apart. In 2011, supermarket-chain-manager-turned-mayor Zoran Jankovic formed his Positive Slovenia just weeks before polling day and mopped up nearly 30% of the vote, only to see his party’s support collapse to a tenth of that by 2014.

Replacing Jankovic’s party that year was another recently-founded newcomer, the Party of Miro Cerar. Cerar used his reputation as an apolitical magistrate to win over a third of the vote and take the post of prime minister. But the party’s support also slipped away, mustering less than 10% by the 2018 elections.

The new party of 2018 – the electoral list of comedian-turned-local-mayor Marjan Sarec – did not do quite as well, but its 13% of the vote was enough to propel Sarec to the prime ministership. In Sunday’s Slovenian election both Sarec’s party and the remnants of Cerar’s party both fell below the 4% threshold for seats in parliament.

Part of the story in Slovenia is tied to Janez Jansa and his Slovenian Democratic Party. The three-time prime minister and pal of Hungary’s Viktor Orbán, has become the Marmite love-him-or-loathe-him figure in Slovenia’s politics.

The magnitude of the success of the new entrants in all the elections since 2011 reflects the same bandwagon that we have commented on in other European elections. When it became clear that Golob was the strongest anti-Jansa alternative, voters of various party persuasions flocked to the Freedom Movement to create the strongest possible counterweight.

But there were other established alternatives to Jansa in each of those elections suggesting there is something more to the story.

Analysis of voting patterns shows that many of the voters who voted for Positive Slovenia in 2011 voted for Cerar’s Party in 2014. And a large slice of those who voted for Cerar in 2014 opted for Sarec in 2018. Moreover, many of Sarec’s (and Cerar’s and Jankovic’s) voters opted for Golob in Sunday’s election. Voters attracted by new parties in a past election, chose newer at the subsequent Slovenian election and in 2022 they voted en masse for the newest.

This pattern of voter movement is something we have observed in many countries including Bulgaria, Iceland, Slovakia and the Czech Republic. We have labelled this phenomenon the new party subsystem: new parties achieve major success with short-term strategies that are very hard to sustain leading to a constant shift of voters from new parties to newer ones that have yet to disappoint.

Newness is alluring for many voters. Add in some anti-corruption appeals and the leader’s perceived competence into the mix and it can become the recipe for success. But newness fades rapidly and discontent can grow, especially when a new party is faced by the challenges of government. Space is freed-up for yet another new party.

The existence of a new party subsystem highlights that fuller explanations for party competition go beyond not just simple left-right terms focused on the role of the state in the economy, but also the battles between socially conservative values versus social liberalism, often tied up with questions relating to identity politics. Neither of these is absent in political contestation in countries like Slovenia, but they are inadequate to explain fully party politics. There is clearly a third dimension of new versus old, and new versus newer.

Across central and eastern Europe we have seen a few cases of new party survival. The small number that endured are those that recognized the ephemerality of newness. They chose to shift their appeal from novelty and good governance to clearer positions on the left-right dimension and on questions of liberal versus conservative social values.

Their endurance has also been aided by their effort to develop organizational structures that can soften the consequences of taking tough choices in government.

Speculation is a risky game for political scientists, but close observers of politics in Slovenia expect the popularity of the Freedom Movement to drop. How far and how fast will be linked to whether Golob makes a serious investment in the issues and organization that keep parties alive. If not, then the next Slovenian election will again tell the same story, albeit with an even newer party.

By Kevin Deegan-Krause and Tim Haughton. Kevin is Professor of Political Science at Wayne State University in Detroit. Tim is Associate Professor of European Politics at the University of Birmingham. They are the authors of The New Party Challenge: Changing Cycles of Party Birth and Death in Central Europe and Beyond (Oxford University Press, 2020).