The SNP, Brexit and the politics of independence 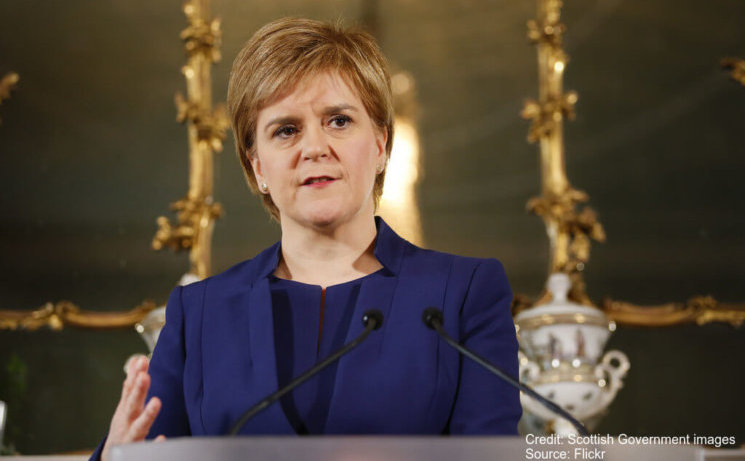 Membership of the EU forms one of the core pillars of the SNP’s vision of independence. The Scottish government’s white paper, published before the independence referendum in 2014, warned a No vote could lead to Scotland leaving the EU against its will.

Following the failed referendum on independence in September 2014, the party maintained its position that independence would occur within a European framework.

As the possibility of an in/out referendum on European Union membership appeared more likely, the SNP warned that this would constitute a ‘material change of circumstance’ which would provide a mandate for second referendum on independence.

The party positioned Scotland as more pro-European than its English counterparts, a position which was borne out in polling prior to the referendum and in the referendum result.

Turnout in the 2016 vote was lower in Scotland: 67%, in contrast to 72% for the UK as a whole. This was perhaps an indication that the issue of EU membership was less salient north of the border.

Speaking the day after the vote, Nicola Sturgeon argued that a second referendum on independence was ‘back on the table’, with another referendum ‘highly likely’. The SNP-led government has focused on making a case for a differentiated settlement for Scotland.

Its December 2016 report ‘Scotland’s Place in Europe’ set out its proposals for a very soft Brexit, including maintaining Scotland’s position within the European single market. In March 2017, Nicola Sturgeon requested the competences to hold a referendum be transferred and was informed by the PM that ‘now is not the time’.

In light of ongoing uncertainty about the form Brexit may take, the party has urged its supporters to be patient. Speaking at the October 2018 party conference, Sturgeon was both cautious and encouraging, arguing that: ‘as we wait – impatiently, at times, I know – for this phase of negotiations to conclude and for the fog of Brexit to clear, be in no doubt about this. The last two years have shown why Scotland needs to be independent.’

Sturgeon’s caution is motivated by two factors – the need to see what form Brexit will take and the desire to ensure a second referendum is winnable.

The party faces pressure from within – new and mobilised members who wish to capitalise on Brexit to secure independence – and outwith, as a party in its third term of government with competition from both Labour and unexpectedly the Conservatives, who moved into second place following the 2016 Holyrood election.

The British Social Attitudes survey has found that support for independence has remained largely stable in light of Brexit, with around 48% of respondents saying they would vote in favour of independence.

While the 2014 campaign was able to capture undecided voters, narrowing the gap in the polls, there is unlikely to be an untapped well of undecided voters in a future referendum.

They also find a significant number of Scots can be classed as eurosceptic, proposing exit from the EU (19%) or a reduction in its powers (39%) which makes campaigning on a pro-European platform more challenging.

Even within the SNP, issues of independence and EU membership are more complex than we might assume, given the position of MPs and MSPs and the prominence of EU flags at independence rallies and marches.

In 2015, the party’s voters were split between europhiles and eurosceptics. In 2017, the party lost support amongst those sceptical of the EU, defined as those in favour of exiting or reducing its powers.

However, a survey of party members conducted after the 2017 elections found that SNP members preferred far reaching ties with the European Union, with 95% endorsing Britain’s continued membership of the single market and 91% endorsing the customs union.

This bolsters the SNP’s demands for a unique solution for Scotland if it remains within the UK. For the SNP, Brexit presents a dilemma. In many ways, it makes the case for independence more compelling.

The SNP can argue that there is a clear divergence between Scotland and the rest of the United Kingdom, which has resulted in Scotland being dragged out of the EU against its will.

However, on a practical level, the model of Scottish independence presented in 2014 will need substantial revisions. This case for independence was contingent on continued membership of the EU for both Scotland and the rest of the United Kingdom.

A scenario in which Scotland remained within the EU and the UK exited would be very different from the independence envisaged in 2014.

The 2014 proposals stressed close integration, the maintenance of the currency union, close economic and social ties, and open borders, a model facilitated by the membership of both countries in the European Union.

As the SNP looks to the future, they may have to return to the drawing board.

By Dr Coree Brown Swan, research fellow at the Centre on Constitutional Change at the University of Edinburgh. You can read the full report ‘Brexit and public opinion 2019’ here.