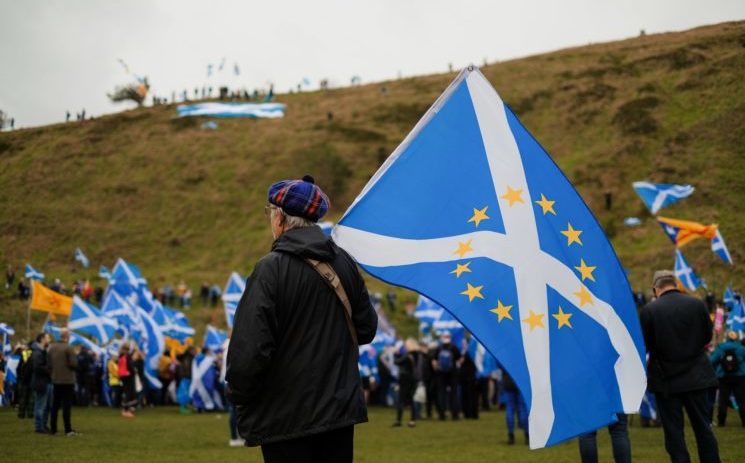 The SNP head into their conference in Aberdeen in a favourable position.

They have been polling around 40 per cent in the polls, below their high point of 50 per cent at the 2015 general election but well ahead of the other parties.

In an early election, they would likely win all their present seats as well as most of those currently held by the Conservatives and a few from Labour as well.

Like the Conservatives and Labour, the SNP voters were divided on Brexit in 2016, with the leadership campaigning for Remain but around 30 per cent of their voters opting for Leave.

Since then, while the Conservatives have swung behind Leave and Labour has sought to appeal to both camps, the SNP has doubled down on its commitment to Remain.

It supports a second Brexit referendum and an interim government headed, if necessary, by Jeremy Corbyn.

Many of its Leave voters deserted it in 2016 and it has made little effort to win them back, presumably calculating that there are more votes to be won among Remainers.

The interim Scottish Conservative leader has swung behind Boris Johnson, while Scottish Labour suffers from the ambivalence of the UK leadership.

In the aftermath of the Brexit referendum, in which Scotland voted Remain by 62 per cent, nationalists were expecting a Brexit bounce as Remain voters moved towards Scottish independence as the only way of staying in the EU.

This did not materialize, with independence support stuck around the 45 per cent it gained in the 2014 referendum. That was not really surprising.

Although the SNP has linked Scottish independence to the European Union since the mid-1980s, SNP voters and independence supporters largely failed to make the connection then or in 2016.

Instead, there has been something of a division between sovereigntists, who include both those who are in favour of complete Scottish independence and hard unionists wanting to reverse devolution, and post-sovereigntists, who like the idea of divided sovereignty.

The former tended to be opposed to Europe and the latter in favour.

Things now appear to be changing, albeit not dramatically. Support for independence has crept up to around half the electorate.

There is an increasing association between support for independence and being pro-European, although the correlation is far from perfect.

The Leave element within the SNP, which mostly supported the softest Brexit in the form of the ‘Norway’ or European Economic Area option, have not made the running within the party.

There is an impatience among the party membership for a second independence referendum and the Scottish government has brought forward a bill.

It will not try to stage a Catalan-style referendum without the permission of Westminster and such permission is not going to come in this parliament.

The preparations, rather, should be seen as a means of keeping the membership on side while preparing the manifesto for the 2021 Scottish election.

If a hard Brexit has occurred by then, it will be able to renew the argument that Scotland has been taken out without its own consent.

On the other hand, an independent Scotland remaining in the EU would face a hard border with the UK.

If there were a second Brexit referendum and Remain were to win, it would remove the grievance but make independence more difficult to sell, as there would be a hard border.

This is the SNP’s dilemma.

The SNP has been in government in Scotland for twelve years and has experienced the erosion of approval that might be expected over that time but the UK parties are faring worse.

If the Brexit process further erodes confidence in British institutions, Scottish politics will continue on its own trajectory.

That does not lead inevitably to independence. Formidable questions remain about borders, the currency and public finances.

Yet it does undermine the compromise reached after the 2014 independence referendum, which provided for powers for Scotland embedded in a more decentralized UK, itself within a broader European framework.