The struggle to prevent atrocities in Ukraine 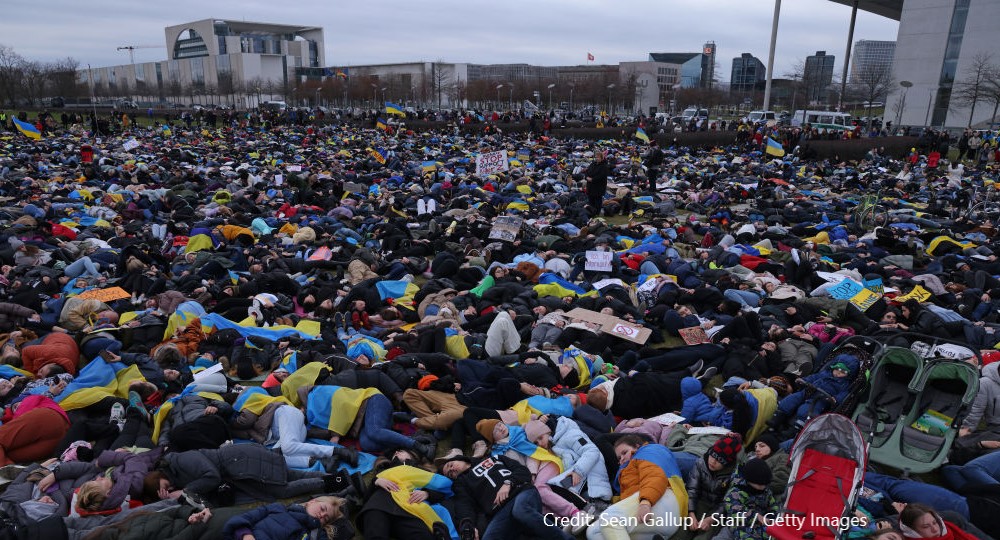 It has become clear that Russian troops in Ukraine have been committing the worst atrocities seen in Europe since the early 1990s. While the Russian government continues to claim, without evidence, that allegations of such crimes are based on ‘fabrications’, a host of independent media, humanitarian NGOs, Western intelligence agencies, and the UN High Commissioner for Human Rights have now documented and/or verified evidence of atrocities.

These include civilian corpses and mass graves concretely datable to the period of Russian occupation, and intercepts of Russian commanders issuing orders to kill civilians. Such atrocities have been accompanied by explicitly genocidal rhetoric from Russian leaders and state-backed media: denying that Ukraine is a true nation and calling for large-scale killings in the name of ‘de-Nazification.’

It remains unclear whether such genocidal rhetoric is actually the reason for atrocities being committed on the ground, and there are other possible explanations for Russian forces engaging in such violence. Consequently, most scholars and international organisations have not yet issued confident conclusions that Russia is committing genocide.

But the indiscriminate shelling of civilian areas and targeted killings and rapes of civilians constitute war crimes and, to the degree that they represent a ‘widespread or systematic’ campaign against Ukraine’s civilian population, would also qualify as crimes against humanity.

There is a significant risk, moreover, that genocide may be imminent or already underway. Since the 2005 World Summit, the international community has acknowledged a ‘responsibility to protect’ civilians from all these crimes.

Yet the international community has frequently been castigated for its failure to prevent such atrocities: whether in the former Yugoslavia between 1992 and 1995, the Rwandan Genocide in 1994, the Darfur Genocide from 2003 onwards, the Syrian Civil War since 2011, or numerous other cases.

In many ways, if the international community proved unable to act in these cases, the prospects for countering atrocities by one of the most powerful states in the world seems remote in the extreme.

Russia has a seat on the UN Security Council allowing it to veto many potential responses, and a military that – its extraordinarily hapless invasion of Ukraine notwithstanding – is widely seen as one of the two or three most powerful in the world.

Most importantly, the fact that the Kremlin controls the world’s largest arsenal of nuclear weapons creates the risk of genuinely apocalyptic escalation should outside powers organise any robust intervention in Ukraine.

Even seemingly moderate proposals, like a no-fly zone over Ukraine, would ultimately have to be enforced – meaning, for example, NATO shooting down Russian aircraft that challenged the no-fly rules.

The steady accumulation of further evidence of atrocities by Russian forces is unlikely to change the basic strategic calculation in NATO capitals here: direct military intervention represents a threshold of risk which cannot be crossed.

It might be thought that Ukraine is destined, then, to be another case added to the long list of international failures at preventing atrocities. While large swathes of the international community have cooperated to impose some of the most dramatic economic sanctions ever seen on Russia, economic sanctions have little proven effectiveness as tools for halting atrocities.

Such measures are still important in cutting off outside funding for Russia’s military endeavour, and possibly incentivising future changes in Russia’s behaviour – and the quicker European states can halt imports of Russian gas and oil the better. But sanctions are unlikely to solve the humanitarian crisis alone.

There is probably more to be achieved in the short-run by the international community’s vigorous efforts to condemn Russian atrocities and keep monitoring and exposing them – which has already resulted in the suspension of Russia from the UN Human Rights Council.

Such ‘naming and shaming’ might seem like ‘cheap talk’, but there is social scientific evidence that it can significantly reduce the severity of ongoing atrocities, potentially saving thousands of lives.

Still, there is little suggestion that such acts can halt atrocities outright. Ongoing efforts to evacuate the local population from areas of eastern and south-eastern Ukraine, on which a bruised Russian military is now focusing its assault, clearly make sense as a means of protecting civilians. Yet the evacuation journey is hazardous, amounts to a massive internal and external displacement of people, and cannot reach everyone.

Halting atrocities outright is not impossible, but it has almost always required the use of military force. That’s unfortunate, since efforts at such ‘humanitarian intervention’ have frequently been either corrupted by questionable motives (as with France’s intervention in Rwanda in 1994 or the invocation of humanitarian rhetoric by the US and UK in the invasion of Iraq) or undermined by a lack of meaningful commitment to sustainable, long-term peacekeeping (as in Somalia in 1993-95 or Libya in 2011).

Since such intervention is currently off the table in Ukraine, however, the real implication here is an obvious but crucial one: the most viable strategy for halting atrocities by Russia’s troops is to help the Ukrainian army to push those troops out of Ukrainian territory.

That strategy has real potential: Ukraine offers a powerful local force that, with a huge influx of support, has a realistic prospect of either defeating Russia or hugely limiting the extent of Russia’s occupation.

Ukraine’s backers have thus far shown some skill in operating within the definition of the conflict Russia has created with its threat of nuclear escalation: transferring major military assets to help Ukraine dominate Russia logistically, without NATO and Russian forces coming into direct conflict.

This state of affairs is hardly risk-free, since supplying heavy military aid to Ukraine is not without any risk of escalation. The extraordinarily impressive resistance Ukraine has offered should not, moreover, lead to a complete romanticisation of their fighting forces, which do include a small number of far-right groups.

Such groups appear to have committed war crimes against Russian prisoners of war – although these cases are far more limited that proven Russian atrocities, and the Ukrainian government has promised to investigate them rather than sought to cover them up.

Nevertheless, in lieu of many realistic alternatives, increasing military assistance to Ukraine represents not just a form of power politics or a way to ensure that Putin’s aggression is not rewarded – it is a mechanism for preventing further atrocities. The more territory Russia’s military is allowed to consolidate control over, the larger the likely scale of further violence against civilians.

Every settlement the Ukrainians can retain, as such, may have significant life-saving consequences. This should not obscure the need for a multi-pronged humanitarian strategy. Greater military assistance must be combined with efforts to document the atrocities, the intensified naming-and-shaming of Russian military forces for attacks on civilians, and guarantees that economic sanctions will continue to worsen if further violations occur.

Direct humanitarian assistance and expanded support for Ukrainian refugees are just as crucial, moreover, and the international community should continue to push for a diplomatic resolution of the conflict that retains Ukraine’s territorial integrity.

But if the international community is not to fail again in its atrocity-prevention responsibilities, greater military support to the Ukraine will be critical.