The Treasury’s Brexit analysis and immigration 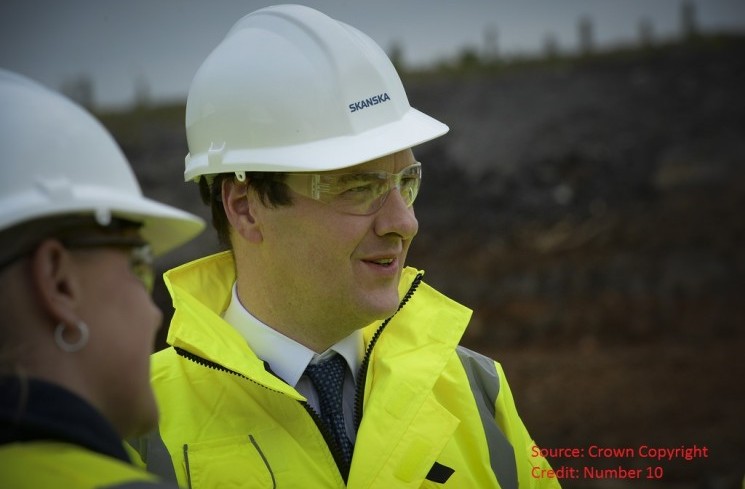 The Treasury analysis of the economic impacts of Brexit, published yesterday, has already been extensively examined. The general consensus among economists and economic journalists, which I broadly share, is that it is a reasonable attempt at using standard techniques to assess the impact on trade and investment, although that certainly does not mean that the results should be taken as gospel, and the Leave campaign are well within their rights to argue that – depending on the nature of the post-Brexit UK-EU relationship –  the negative consequences for trade would not necessarily materialize in practice.

However, as I pointed out immediately I saw the analysis (and the press has since highlighted), it simply omits one of the central issues in the referendum campaign – immigration and in particular free movement of workers within the European Union.   There is a very brief (and reasonable) summary of some of the research (paras 1.107-1.10).  But when it comes to the actual modeling, it says this:

3.46 Section 2 demonstrated that no country has been able to agree significant access to the Single Market without having to accept EU regulations, financial contributions to the EU and the free movement of people. In the case of the EEA, there would be no change to net migration relative to being inside the EU as the same rules would apply. Among the negotiated bilateral agreements those that grant the greatest access, such as the Swiss arrangement, involve accepting free movement of people. The migration implications of the WTO alternative would depend on the government’s policies following a vote to leave. Further, it is also likely that any action by the UK government to reduce immigration would be met with reciprocal action by other EU countries, which would potentially reduce emigration from the UK. This would offset some of the reduction in overall net migration. There could also be pressure to pursue more liberal immigration policies vis-à-vis non-EU countries in order to promote new free trade deals.

3.47 Given the above unknowns, no additional effect from net migration has been assumed in the modeling. This is consistent with adopting a cautious approach for the purpose of modelling the effects on overall GDP, reflecting uncertainty about the type of arrangement the UK may have with the EU and so about future migration policies and migrant behaviour.

There is nothing here that is untrue.  But it is frankly disingenuous. Of course there would be uncertainties, post-Brexit about what arrangements would govern migration between the UK and the remaining EU; and what migration policies the UK would adopt with respect to the rest of the world. But precisely the same is true of trade.  And that didn’t stop the Treasury.

So how would we model the impact of changes to migration post-Brexit? The first task would be to construct some scenarios. As the Treasury says, one is easy; if we remain in the EEA with arrangements similar to those of Norway (or, outside the EEA, Switzerland) little would change. But other scenarios are possible, and indeed perhaps more likely, as I discuss here. In a forthcoming paper for the National Institute Economic Review I outline two: a “restrictive” one, where we apply similar rules to EU migrants as those which currently apply to non-EU migrants; and a “liberal” one, where the current framework for non-EU migrants is relaxed somewhat, and applied to both EU and non-EU migrants.

Both would reduce the volume of migration (Migration Watch estimates that the first would reduce net migration by about 100,000; obviously the reduction under the second would be less). They would also both change the composition of migrant flows, presumably to make them somewhat more skilled, on average, although this impact is often exaggerated, since migration to the UK is already highly skilled compared both to the native population and to migration in generally (even compared to countries like Australia which operate selective systems).

And how would we model the economic impacts of these changes?  First, there would simply be a compositional effect.  EU migrants are more likely to be employed than natives, much more likely to be of working age, and have lower wages on average; skilled migrants from outside the EU are similar, except that they have higher wages on average. Calculating the impacts on GDP, GDP per capita and the public finances of a reduction in EU migration (offset, or not, by some increase in non-EU skilled migration) is relatively straightforward. Over the time period considered by the Treasury, the likely results of a restrictive policy would be to reduce GDP and damage the public finances, but probably with little impact on GDP per capita; while a liberal policy would – depending on how liberal it was – have less of a negative impact on GDP and the public finances and might well boost GDP per capita.

But more interesting and challenging is to model the indirect impacts, particularly on productivity. As with trade, this is challenging, but again, as with trade, there is a considerable existing literature on which the Treasury could reasonably have drawn. I summarized it here in my evidence to the Home Affairs Committee.  In particular, the most robust recent paper, produced by researchers at the OECD, found that a 50% increase in the migration rate to the UK is associated with about a 0.3% increase in productivity (which is a relatively good proxy for GDP per capita over the medium run). This is largely because migrants to the UK are relatively highly skilled compared to the native population.  Here’s their table which summarises the results. 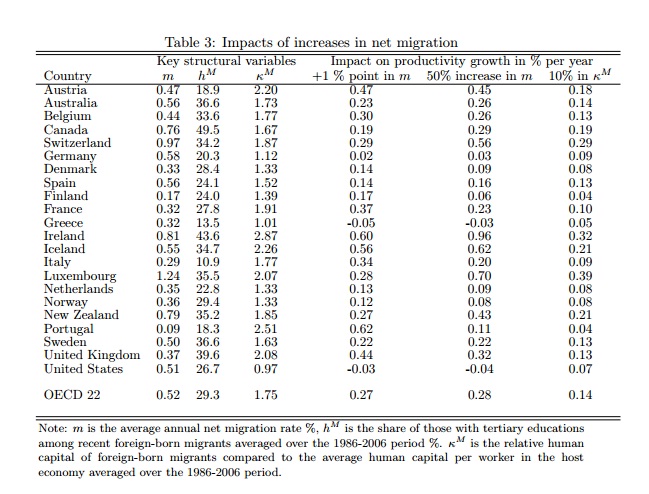 This analysis, and others like it, could easily have been used to model the impact of changes to UK immigration flows resulting from Brexit.  Indeed, forthcoming work by my NIESR colleague Katerina Lisenkova will examine these issues.

What would it have shown?  Almost certainly, that if post-Brexit the UK chose to adopt a restrictive migration policy  – that if it chose to use the newly won flexibility afforded by Brexit to significantly reduce migration – that this would significantly damage the UK economy. However, if the UK adopted a relatively liberal policy – that is if we allowed a substantial increase in non-EU migration to partly counterbalance any reduction in EU migration – that any negative impacts would be mostly mitigated and indeed, if sufficiently liberal, there would even be economic gains.

So, to return to the original question, why did the Treasury ignore immigration? Not, as I have shown, because it is any harder to model, or more uncertain, than trade. Because it is less important economically? Perhaps – but note that the magnitude I cited above of the productivity loss resulting from a large, but not inconceivable, change in migration is actually quite similar to the loss resulting from changes to trade (0.3% a year is similar to the negative productivity impact found in the Treasury’s central scenario).   Because it would not support the government’s case for Remain?  Maybe – the analysis might well have shown that a sufficiently “liberal” migration policy post-Brexit would have economic benefits.  Most likely, however, is that it was simply a political decision not to talk about immigration and free movement at all.

This omission is extremely regrettable, for a number of reasons. First, as noted above, given the centrality of immigration in the debate, any analysis that ignores it cannot be described as comprehensive. Second, it highlights that while the Treasury’s analysis is robust, it cannot be described as neutral or objective; the choice of what factors to include was clearly a political choice. Third, while avoiding the topic of immigration may suit the government, in this context it also lets the Leave campaign off the hook.

As I’ve noted before, if the UK votes to Remain, it will have accepted – however reluctantly – that staying entails a commitment to free movement of workers in the EU, both in principle and practice, and the resulting migration flows.  If we vote to Leave, we will have voted for change, and we need to know, as far as possible, to what and what the impacts will be. The Treasury, in allowing its political masters to dictate what topics it did and didn’t analyse, has missed an opportunity, and the debate will be poorer as a result.

This piece was written by Jonathan Portes, principal research fellow of the National Institute of Economic & Social Research and senior fellow at the UK in a Changing Europe. Originally featured on NIESR