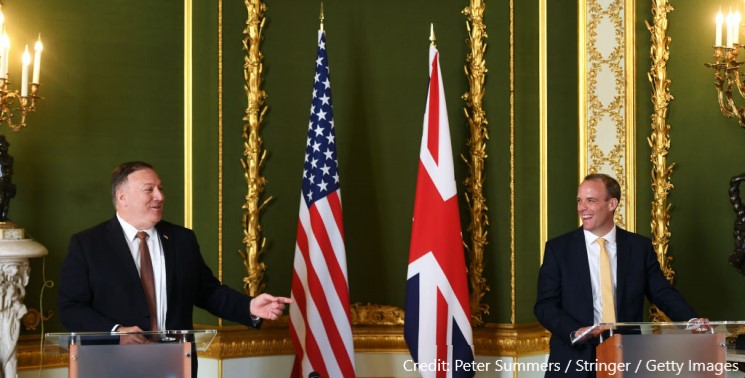 One of the great unspoken imperatives of diplomacy in the last two decades has been to find a comfortable place on the fence between Beijing and Washington, and sit there hoping that neither of the great powers decided to demolish it.

In 2020, a combination of Xi Jinping’s muscular nationalism, Donald Trump’s re-election campaign anchored on the one issue that actually seems to unite Americans – seeing China as a major threat – and Covid-19 has brought that fence crashing down.

A host of issues have reached crunch point, from what investments one can accept, to which technology companies might be allowed to operate in one’s country, to what security or economic arrangements can be signed up to.

Once upon a time, a middle ranking power like the UK could coast along soothingly telling a Chinese company like Huawei that it was able to work with it in any areas which did not compromise security, and the American government that it would go and join the China-instigated Asian Infrastructure Investment Bank (AIIB) against their advice and wishes because it served British interests, and not take any drastic consequences beyond an initial sharp nagging.

In July 2020, those days are long over. The headache of trying to manage things in a world where the principle security interests are with the US, and the main trading, investment and economic interests with China, is not one that the UK suffers alone.

But as it moves more deeply into the post-Brexit world, it is one that the UK is experiencing particularly sharp turbulence over. It alone has decided to face this quandary at the same time as it reconfigures its relations with its largest economic partner – the EU.

Until Covid-19 a large part of its argument for doing this was predicated on mitigating what it lost from the EU by being able to enjoy more open and closer deals with the US.

There was also as aspiration as a global player to be able to open up opportunities with places where the relationship had yet to start achieving its real promise – China (the world’s second largest economy) in particular.

Now the facts on the ground have changed dramatically – and in a short period of time. The US economy, like that of the UK, has been knocked sideways by the lockdowns and other effects of the coronavirus crisis.

Maybe everything will soon be restored to healthy growth. Even so, the great unexplored world of doing more after a free trade deal with the US looks less likely, and less enticing, than ever before.

With a no-deal, or a vague deal, with the EU at the end of the year also looking likely too, and the imposition of fresh tariffs and other restrictions, the hunt for new partners by a country that on top of this uncertainty has also itself lost nearly a quarter of its GDP by mid-2020 has never been more urgent.

China should figure in finding a way out of this. It is not a huge investor in Britain as yet, but has shown interest. Nor is it a vast trading partner – not at least compared to the EU and US. And yet it is a fifth of global GDP.

Far more than other candidates like India, it should be prime target for more activity. But the tragic irony is that at the time when a deal with China would make most sense for the UK, it is least possible.

This is for the very simple reason that the irresistible logic of the post-Brexit world for UK diplomacy at least is that far from taking back control, the country has simply shifted its foreign policy making from Brussels to Washington.

At least with Brussels, it had a 28th share in decision making. With Washington, it has zero. And these days, with Washington, the default towards China is to just say no.

Huawei was the test case par excellence. One of only three suppliers of the kind of 5G kit, and the most economic, the issue was never with the quality of its products, which are largely regarded as good. It was about the claims that as a Chinese company, it would always pose a security threat.

In the past, there could be debate about whether the company was, or wasn’t, deeply linked to the state, and whether it really would jeopardise its global operations by hiding backstops in its coding that could be used for infiltration. That debate has now been decided, rightly or wrongly, largely in Washington.

This is not to say that the conclusion was wrong; but it is to make clear that the UK was certainly not a part of that process of decision making, even though it lives with the consequences.

In view of this new context, the UK in July, despite initially being more ambiguous, climbed down from the fence on Huawei, saying the company has to exit the UK market within the next eight years.

These issues will come thick and fast now. TikTok, the hugely popular app owned by a Chinese company, is now in the sights of the Trump administration. If banned there, it will no doubt quickly being blocked in Britain too.

Investment in nuclear energy plants, such as happened in Hinkley Point in 2017, is also likely to be phased out. It is questionable whether any significant Chinese investment in any sector would be able to come to the UK.

The reality of this great climb-down is that the little strategic space for genuinely autonomous action allowed to a player like the UK before 2020 is now going, or already gone. The choice was always a stark one. As the classic Bob Dylan song said, ‘You’ve got to serve somebody.’

And the UK, after Brexit, can say it serves a better master than it did while it was still part of the EU – but it cannot pretend it does not serve, no matter what the patriotic rhetoric emanating from the current Prime Minister says to the contrary.