The UK has negotiating leverage on fish, but both sides are interdependent 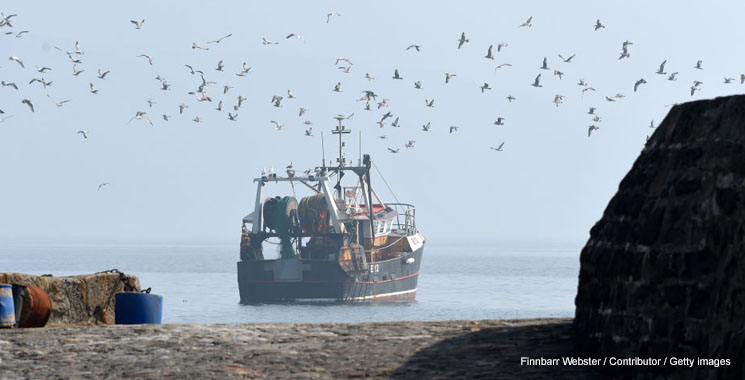 Strange as it may seem to the uninitiated, fish is at the crux of the ongoing negotiations between the UK and the EU, as we outline in a new UK in a Changing Europe report.

The latter have insisted that without an agreement on fish, there can be no agreement on anything. Or, to adapt an old EU favourite, ‘nothing is agreed until every-fin is agreed’.

There are good reasons for this: the EU recognises its relative weakness on this point and wants to bundle fish together with other aspects of an agreement to reduce the UK’s leverage.

It is perhaps the one area in an otherwise lopsided negotiation where the British are perhaps justifiably bullish.

Nevertheless, as in the UK, fisheries constitute a tiny proportion of EU economies. For most member states, fishing (including farmed fish) amounts to 0.1% or less of their economic output and just 0.1% of total employment. 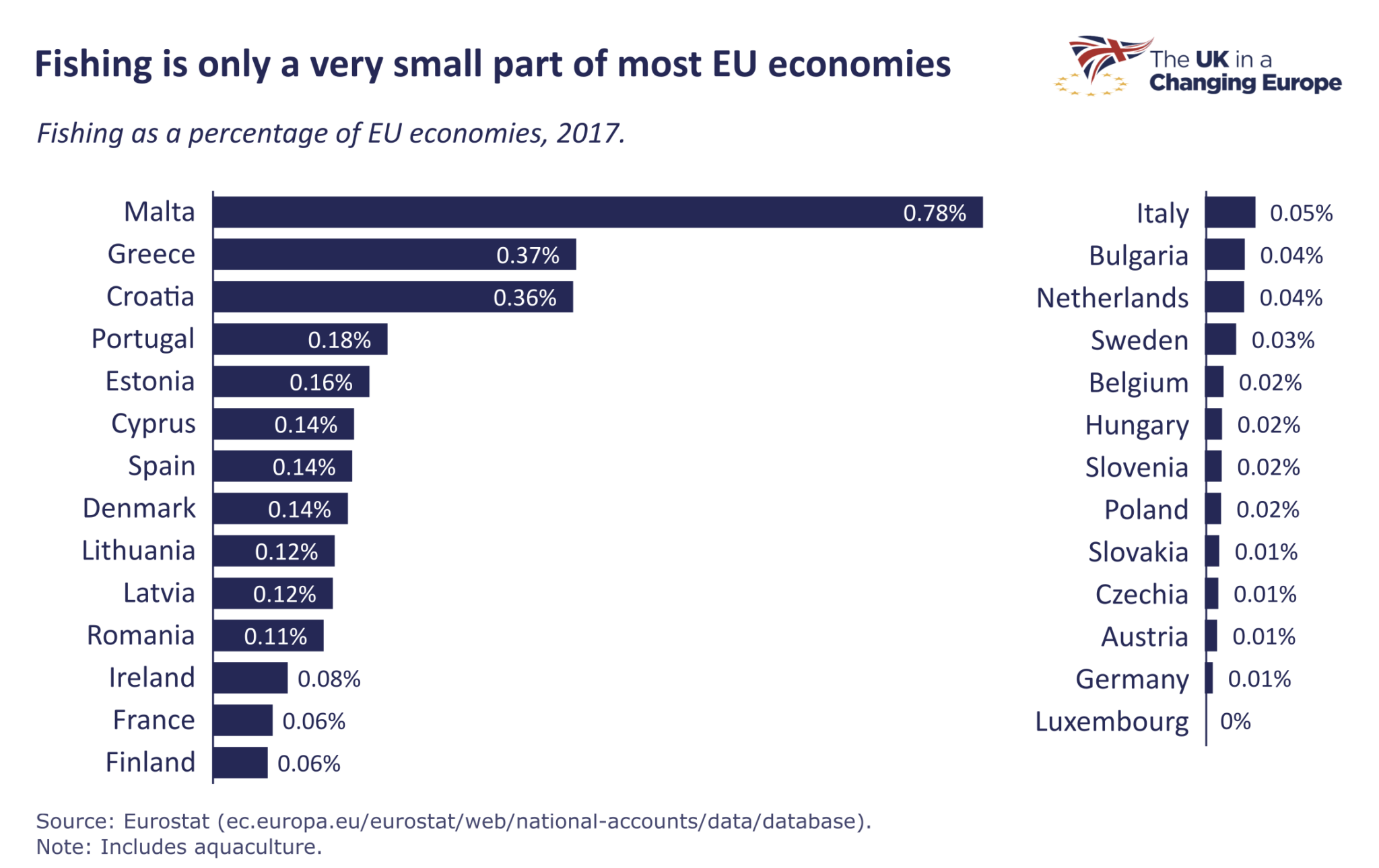 Nevertheless, most EU countries have at least some sea fishing activity, with the exception of its five landlocked members (Austria, Czechia, Hungary, Luxembourg and Slovakia).

The EU catch is fairly widely distributed, but three countries (when the UK is excluded from the data)—Spain (20%), Denmark (20%) and France (11%)—account for just over half the total. 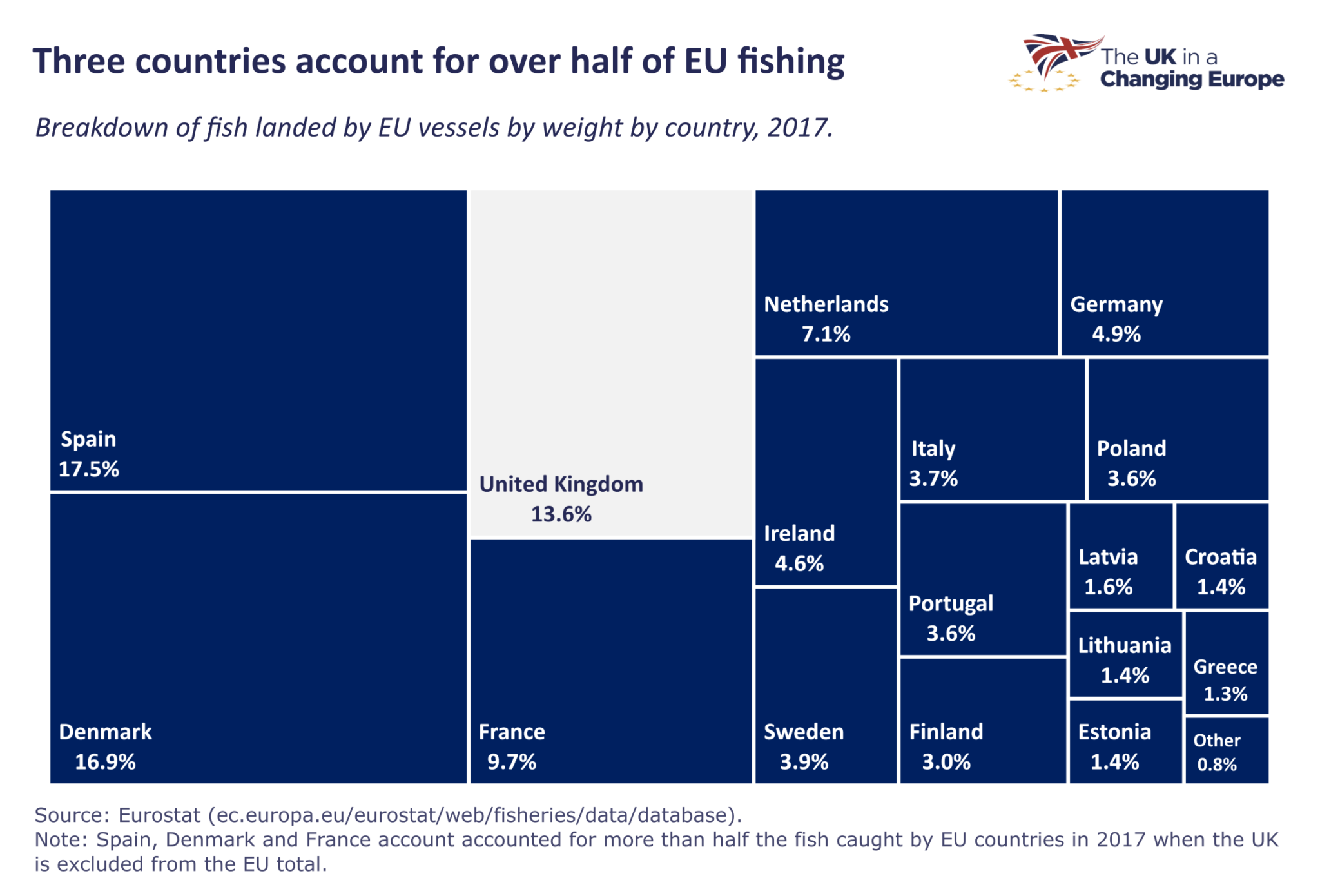 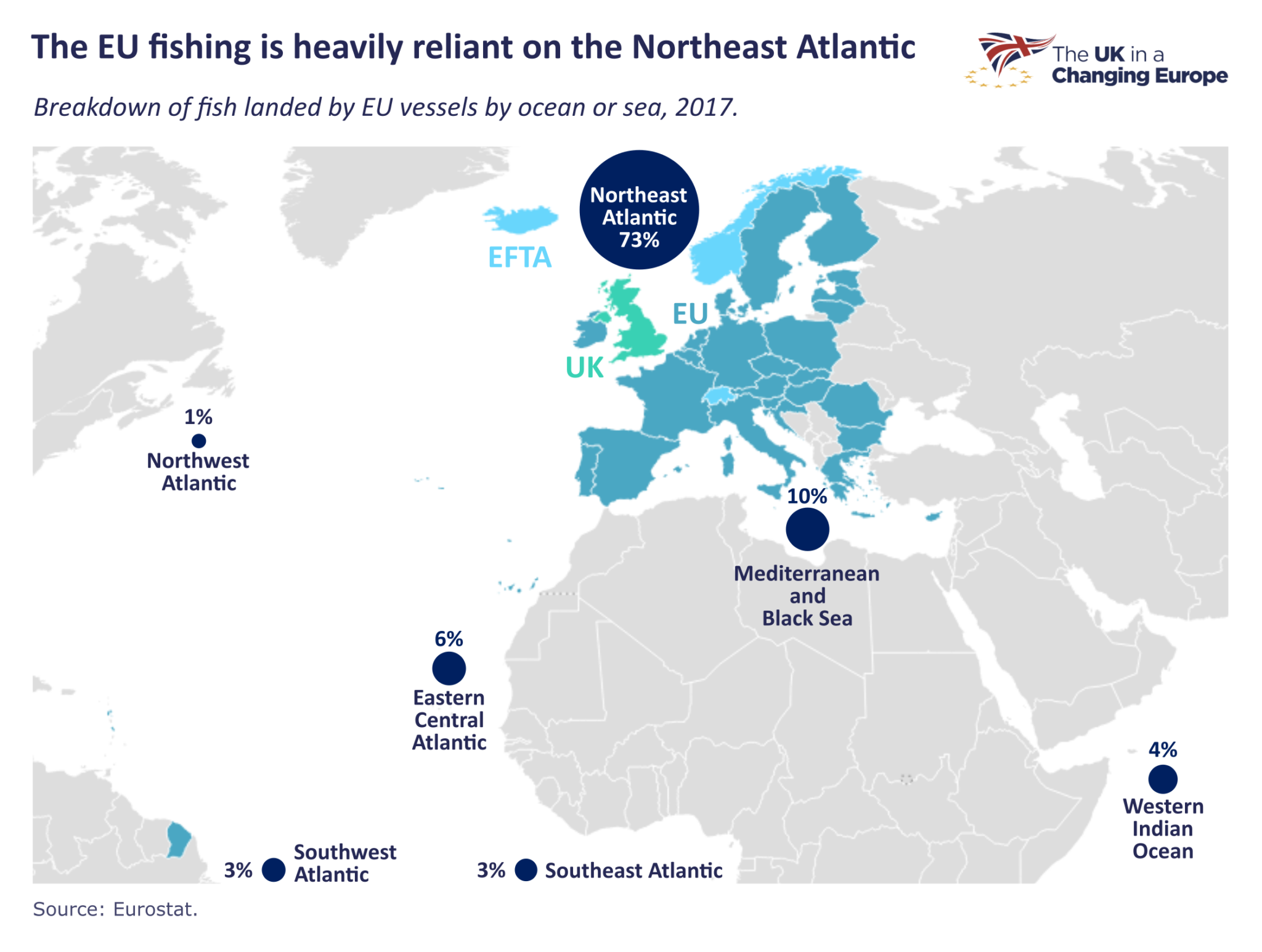 For each of these countries, UK waters represent around a third or more of their total catch in the North-East Atlantic, and for the Netherlands it is more than half.

Despite Spain accounting for the largest share of the EU’s overall catch, it relies very little on UK waters. 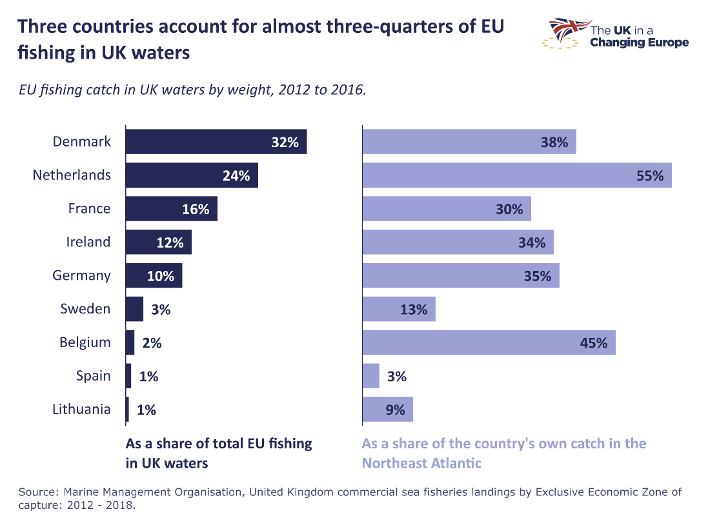 Employment in fish processing in the EU may be just as hard hit by any adverse outcome in the negotiations as fishing itself.

In France, for instance, employment in processing is almost double that in fishing. In Spain, a third of fishing jobs are in the processing sector, and in Germany it accounts for 85% of jobs in the sector.

Many EU countries also rely on the supply of UK fish both for consumption and processing. In 2017, for instance, just under two-thirds of UK mackerel was exported—the vast majority to the EU, and more than a third to the Netherlands alone. Clearly, UK exporters rely on EU markets here too.

The largest fish consumers in the EU are Portugal (at 57kg per person per year) and Spain (46kg)—well above the UK level (23kg).

There are 50 such protections in place for fish species in the EU: seven held by Germany, and five each by France, Italy and Spain.

As a member state, the UK had by far the most, at 14, with four applying to salmon alone. Whether these continue to be mutually recognised will be subject to negotiations on the future UK–EU relationship.

Maintaining GIs is one of the EU’s demands, but the UK clearly has an interest in protecting such products as well. Any UK concessions on GIs could complicate other trade negotiations, such as with the US, who regard this as EU protectionism.

The political importance of fisheries in the EU far outweighs its economic value, just as in the UK.

This was demonstrated in February with the temporary disruption of access for French vessels to the waters around Guernsey in the Channel Islands. The disruption reportedly affected only 30 vessels, yet garnered international media attention and drew the ire of a number of French politicians.

There ought to be a rational middle ground to be found, but little about the debate on fisheries is rational.