In discussions on the mass movement of people from the Mediterranean Basin to Europe, the choice of words can play an important role.Clare Llewellyn and Laura Cram explore how users on Twitter make use of the terms ‘migrant’ and ‘refugee’ in the debate.

The movement of people across borders and the implications of that movement are at the heart of current debates in the European Union. This issue is likely to play a central role in the forthcoming UK referendum on continued membership of the EU.

Sep 14, 2015 … Last month’s immigration statistics showed net migration to the UK rising to … painlessly, what would our new immigration policy look like?

How the debate is framed in public discussions may have important implications for the outcome of the referendum.

There has been discussion both online and in the media about the use of the terms ‘migrant’ and ‘refugee’ and the difference between the terms.

Not all migrants then are refugees, but refugees can fall under the migrant umbrella. One of the major differences between the two designations is that while migrants may seek to escape harsh conditions of their own, refugees could face imprisonment… CNN

With the BBC using both in one headline: Migrant Crisis: UK Public ‘Split’ over Taking Refugees

Some 57% of people in the UK are in favour of the status quo, or the government taking fewer refugees from Syria and Libya, a poll suggests. Forty per cent said the UK should take in more. One thousand people were interviewed by telephone between Friday and Sunday in a ComRes poll for BBC Newsnight. BBC News

There was even a petition asking the BBC to use the term ‘refugee’: Petition · Request BBC use the correct term Refugee Crisis instead …

We kindly request that the BBC use the term Refugee Crisis instead of Migrant … One word can make all the difference. … Zinon Zygkostiotis started this petition…WWW.CHANGE.ORG

We looked to our dataset to see if there was a difference in how these terms are used on Twitter. The data was collected between 7 August 2015 and 11 September 2015 (it is ongoing but these snapshots are taken from then). Initially we looked at the frequency of the two terms: 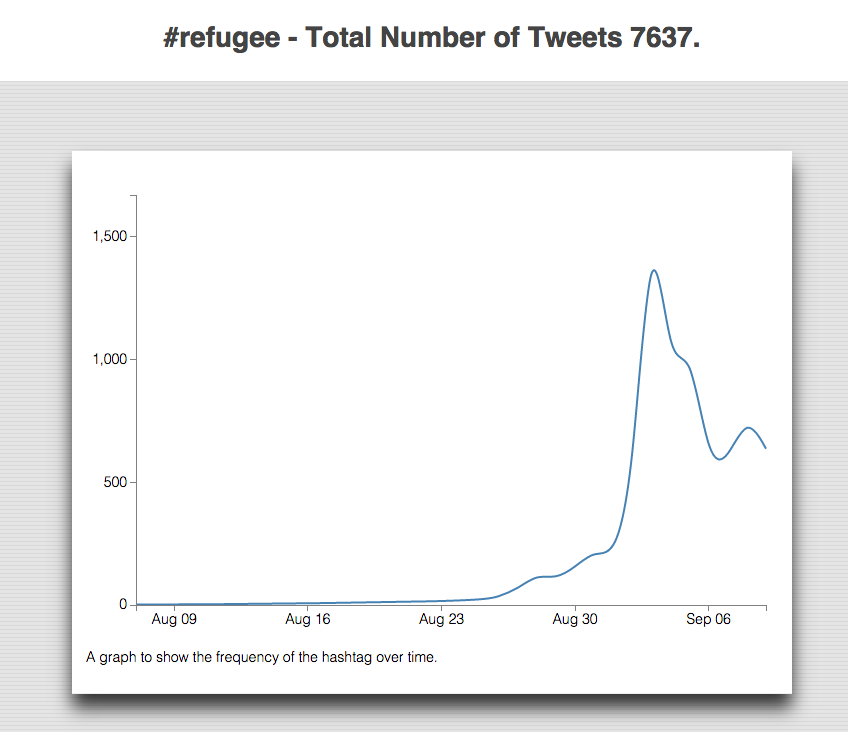 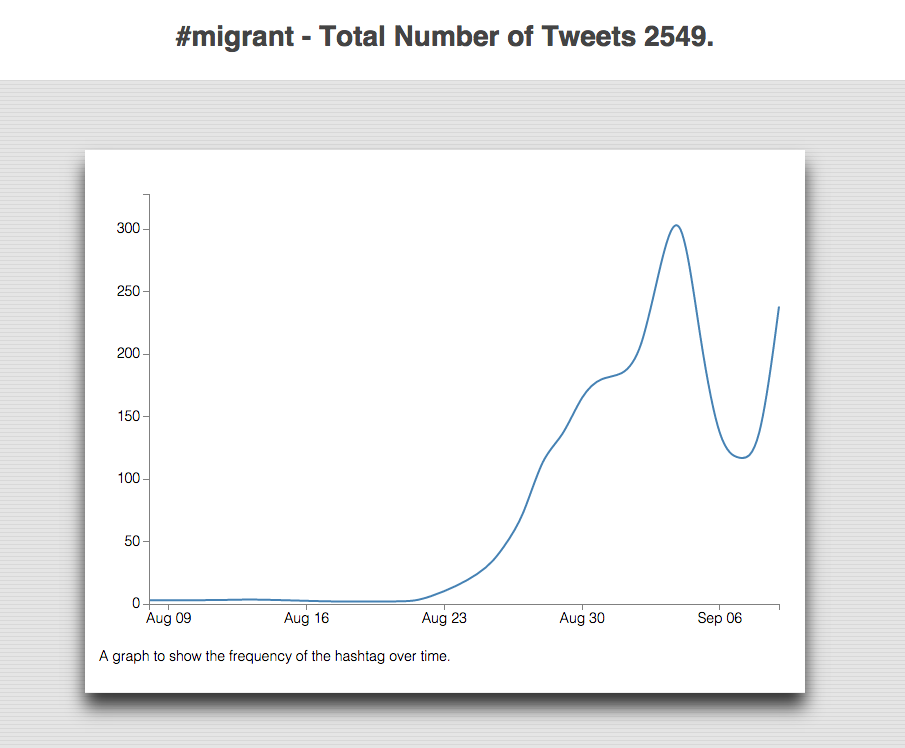 We can see that the term ‘migrant’ is used much less frequently than ‘refugee’ – 2549 times as opposed to 7637, respectively. We also see that the use of both terms has increased dramatically after 20 August 2015. The trend continues up towards a peak around 3 September 2015, when the body of a young refugee was found on a beach in Greece.

We also looked at which hashtags are used in association, and used in the same tweet, with migrant and refugee. We also included any compound terms including refugee such as refugeesWelcome (the biggest tag in our set by far) or refugeecrisis. Considering that we built the set using the search terms ‘EU’ and ‘Europe’, it is no surprise to see them in the set. However, since they are used in the same tweets as ‘crisis’ and ‘migrant’, the Twittersphere obviously sees this as an EU-related issue. There are some specific locations mentioned in association with ‘refugee’ – namely, Syria, Kos, Munich, Germany and Hungary.

@myimageoftheEU Use of #migrant during August and September 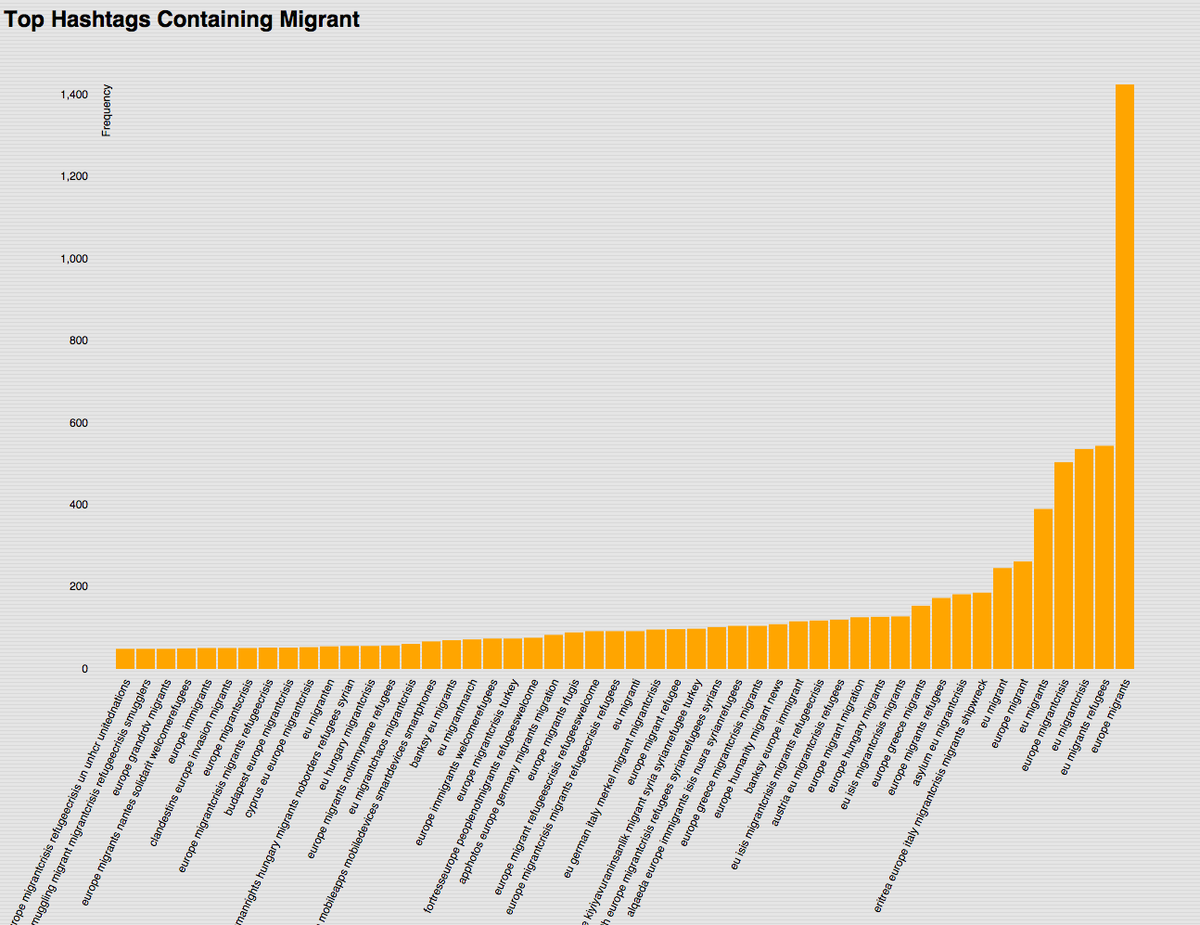 When people use the term ‘migrant’, they also often mention ‘asylum’ and ‘ISIS’. These terms don’t appear with ‘refugee’.

@myimageoftheEU Use of #refugee during August and September 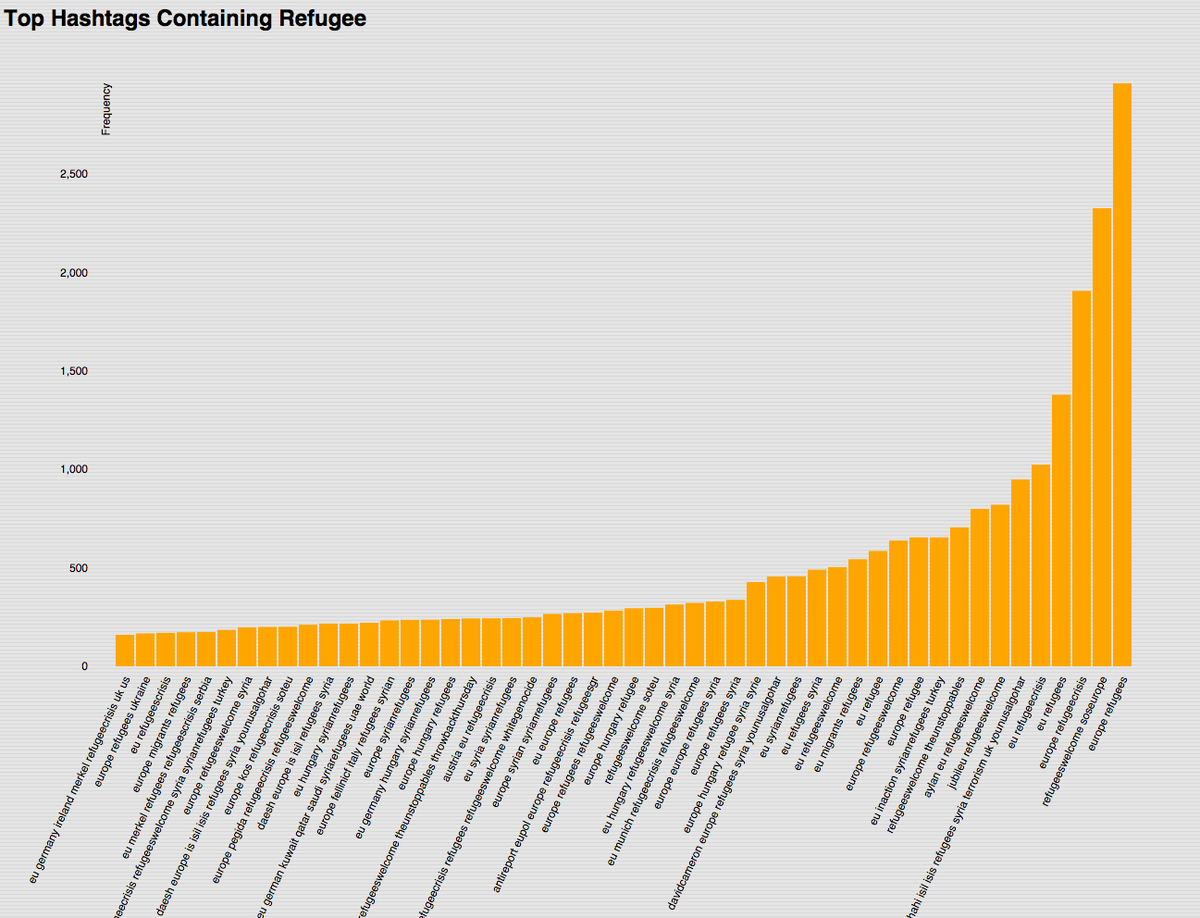 Our project is part of the Economic and Social Research Council’s The UK in a Changing Europe programme. Look out for our regular updates as the project tracks developments in the debate on the UK’s continued membership of the EU and follow us on Twitter @myimageoftheEU.

Laura Cram (@neuropols and @EUidentity) Laura Cram is Professor of European Politics at the University of Edinburgh and academic editor of European Futures. She is senior fellow of The UK in a Changing Europe and is investigating The European Union in the Public Imagination: Maximising the Impact of Transdisciplinary Insights (ESRC/ES/N003985/1).