The Ventotene Manifesto and the European Union at sixty 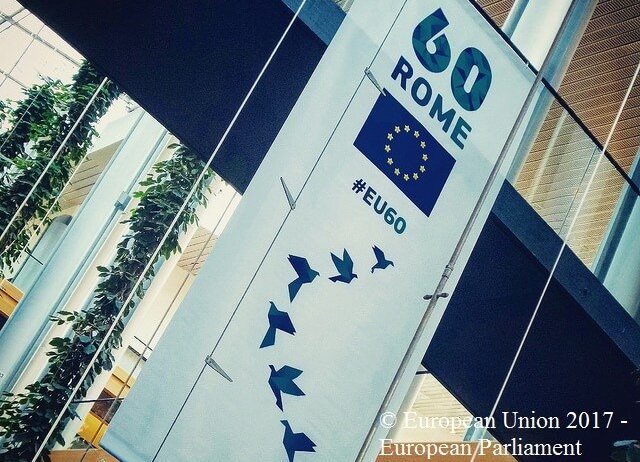 In 1941, two anti fascist intellectuals, Ernesto Rossi and Altiero Spinelli were placed under arrest on the Italian island of Ventotene, and there wrote a manifesto for a free and united Europe, against nationalism, for solidarity, cooperation and respect for cultural plurality.

By reading a speech given by Joschka Fischer, German Foreign Minister in 2000 nearing the time of EU eastward enlargement, and the Declaration that the 27 EU leaders signed in Rome on Saturday 25 March 2017, it is possible to trace the same values and the same call to ‘move onwards’ the path of European integration.

‘A free and united Europe is the necessary premise to the strengthening of modern civilization, for which the totalitarian era represented a standstill.’ (Ventotene Manifesto) And more than one third of EU citizens are satisfied with the EU’s respect for democracy, human rights and rule of law, as well as its economic and trade power.

On Saturday, Heads of State and Governments met in Rome to celebrate the 60th anniversary of the Treaties of Rome, signed, in 1957, by Belgium, France, Germany, Italy, Luxembourg and the Netherlands, establishing the European Economic Community and the European Atomic Energy Community.

The Treaty of Rome focused on a few basic principles to create a common market, and as such established the four free movements, of goods, people, services and capital. The goals behind a common market were to bring the peoples of Europe closer together (‘ever closer union’), reduce economic and social differences, establish a common trade policy, pool resources to preserve and strengthen peace and freedom, and progressively lead to a closer political union.

‘Quo vadis Europa?’ asked Joschka Fischer, then German Foreign Minister, at Humboldt University in Berlin in May 2000. It was a call to Europeans to move ‘…onwards to the completion of European integration. A step backwards, [would have represented] a fatal price of all EU Member States and of all those who want to become Members’.

Almost twenty years after, the call is the same, the EU needs to re-start, after the positive image of the EU has been declining across all its member states since the economic and financial crisis hit its peak in 2008, with 55 per cent of citizens asserting that their voice does not count in the EU.

The spiral of Euroscepticism, as qualified and outright opposition to the EU integration process, is embedded, with negativity bias and misrepresentation, across traditional and new media (Galpin and Trenz 2017), has become persistent (Usherwood and Startin 2013) in public debates, and culminated with the British vote in the referendum on 23 June 2016 to ‘Leave’ the EU.

Meanwhile, the domestic politics in countries holding general and presidential elections is characterised by the strengthening of the vote for populist and populist radical-right parties, with Marine Le Pen in France asserting that Britain has shown the world the way. Concurrently, the migration crisis evolved into a crisis of solidarity, going against a basic principle of the EU.

In Rome, the 27 EU leaders gathered together to re-start the EU project after a few troublesome years. British Prime Minister Theresa May declined to join the extraordinary meeting, arguing that as ‘the EU 27 are moving in one direction, the British public voted to go in another direction.’

The Declaration of Rome they signed opens with a recognition of the awareness of the new and ‘unprecedented’ challenges facing the Union, but shows its determination to offer citizens security and new opportunities. The EU seeks to become more resilient, sustainable and ‘socially responsible’.

Its four main objectives focus on a safe Europe, combatting terrorism and organized crime; sustainable growth and development, with ‘structural reforms… towards completing the Economic and Monetary Union’; ‘a social Europe’, promoting cultural diversity; and a stronger Union globally, supporting prosperity in the neighborhood.

The pledge to listen to citizens, respond to their concerns, and pursue solidarity, reflect the need to react to the current lukewarm support across some member states. Although some EU leaders, such as Polish Prime Minister Beata Szydło, and Greek Prime Minister Alexis Tsipras signed the declaration after expressing some dissent, this seemed to be an instance of necessary posturing for their domestic audiences. Yet, commitment to common goals seems to depend on the development of a multi-speed EU, as the current EU cannot cope with further slowdowns and veto players.

So, how can the EU be re-energized? Unavoidably, it needs to fill a gap that still exists between its institutions and citizens. The British referendum was characterized by deep divisions and heated debates, where anger, disappointment and anxiety, were present in the political and social spheres.

The economic and financial crisis has further created mirroring populist ideologies, with austerity creating anti-German sentiment in Greece while concurrently the bailouts increased support for the Alternative für Deutschland (AfD), in Germany. Sergio Fabbrini suggests a return to the federalist idea within a new political agreement that can actually refresh the work of the EU institutions.

Just a few hours away from the moment when Theresa May triggers Article 50, the EU needs to face its future and its citizens’ concerns and demands. According to Eurobarometer survey data, these are fostering social equality and solidarity, protecting the environment, and improving living and education standards.

As the Ventotene Manifesto closed its call to unification, the challenge is for the EU to re-start the process of integration with its citizens, based on solidarity, cooperation, and social equality that make a difference in citizens’ life.

As a researcher on public attitudes towards the EU, I find that it is in the citizens’ recent resistance against the possible success of extremist and nationalist sentiments, in the organization of the ‘pulse of Europe’ demonstrations and the pro-EU marches in the UK, as on March 25, that the re-launch of the EU could find new energy and possibly re-start from the grassroots of Europe.

Simona Guerra is Associate Professor in Politics at the University of Leicester.