The Von Der Leyen Commission and Brexit: ‘business as usual’ 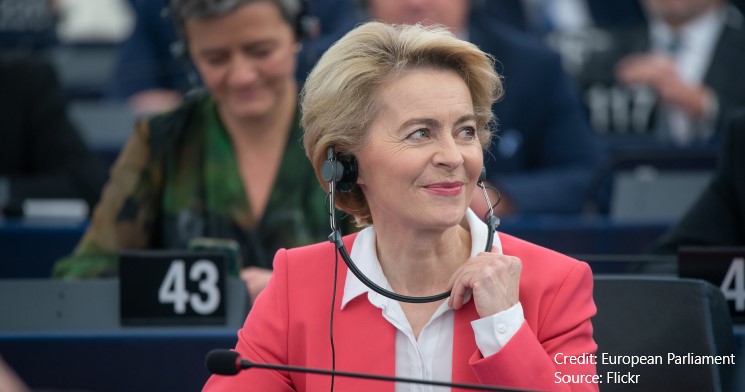 Following several rounds of difficult question-and-answer sessions, and a confirmatory vote in the European Parliament on 27 November 2019, a new team of commissioners takes office on 1 December.

The message from the top floor of the commission’s Berlaymont headquarters is that it will be ‘business as usual’ so far as Brexit is concerned.

Speaking to MEPs before her election, the incoming European Commission president, Ursula Von Der Leyen declared that, while she respected the decision of the British people to leave the EU, she would always be a Remainer.

The Commission’s role in Brexit

The European Commission has a key role to play in navigating the UK’s departure from the EU.

The commission was charged by the European Council, the body that brings together the political leaders of EU member states, with leading the Article 50 negotiations.

This job has been carried out by the Article 50 Task Force, led by Michel Barnier, who was nominated by Von Der Leyen’s predecessor, Jean-Claude Juncker.

Moreover, when Theresa May encountered difficulties in securing a parliamentary majority for her withdrawal agreement, the commission created a preparedness team in its Secretariat General so that the EU would be ready in the case of a no-deal Brexit.

Nearing the end of its term, the Juncker commission decided in October 2019 to merge the Article 50 Task Force and the preparedness team into a single entity, The Task Force for Relations with the United Kingdom.

According to its mission statement, this body will be ‘[i]n charge of coordinating all the European Commission’s work on strategic, operational, legal and financial issues related to the United Kingdom’s withdrawal and its future relationship with the European Union’.

Michel Barnier has been appointed to head the new entity.

More broadly, since the European Commission and not the European Council is responsible for the negotiations, the Commission president has intervened at key moments, most notably in talks with the UK prime minister – with Theresa May in 10 Downing Street and with her successor, Boris Johnson, in Luxembourg in September.

The European Commission regularly briefs the EU27 about developments in the negotiations.

The first woman to be president of the European Commission, Ursula Von Der Leyen has not found the path to her new office easy.

Her name materialised in connection with the post only once it became clear that Manfred Weber, the chosen candidate (or Spitzenkandidat) of the European People’s Party, was not considered by members of the European Council to have the appropriate experience.

Based on a provision of the Lisbon Treaty, which requires the European Council to take account of the results of the elections to the European Parliament, the European People’s Party, the Socialists, the European Conservatives and Reformists, the Greens, and the Party of the European Left had all selected a candidate or co-candidates who, in the event of their party topping the polls, would become the Parliament’s nominee for the post of Commission president. The Liberals, by contrast, insisted on the appointment of a seven-strong ‘Team Europe’ to cover all the top jobs.

In 2014, when the Spitzenkandidaten system came into operation, the European Council had opposed its introduction on the grounds that the decision to nominate the Commission president should belong to its members alone.

However, under pressure, they eventually conceded and decided to nominate Jean-Claude Juncker, who had been the chosen candidate of the European People’s Party – which had headed the polls in the June 2014 elections.

Juncker was able to claim a unique mandate to implement the policy platform on which he had campaigned, use July and August to plan the transition, and draw on three decades of European experience at the highest levels to handpick commissioners.

He also enjoyed the support of a grand coalition in the European Parliament.

Ursula Von Der Leyen does not have the same assets or resources.

Although she has been a Minister for Defence in Germany, she does not have similar breadth or depth of European experience. Nor, with the breakdown of the Spitzenkandidaten, does she enjoy the same level of strong support in the European Parliament.

With the changed composition of the European Parliament, including an increase in the number of Greens and new MEPs generally, Von Der Leyen faces a more fragmented legislature.

As a result, she has had to make policy compromises in order to secure her election, including a number which appear to involve stepping back on the commission’s traditional prerogatives.

Since the French, Hungarian and Romanian members of her original team were rejected following hearings in the European Parliament, the time she has for transition has been compressed.

There is also the question of a commissioner from the UK, which is as yet unresolved.

In short, the incoming Commission president has faced a rocky ride.

Even if her route to the top job has not been as smooth as her predecessor’s, the views that Ursula Von Der Leyen has so far expressed on Brexit suggest that there will be a strong continuity or policy and approach.

Depending on what happens in the UK, Von Der Leyen could preside over a number of outcomes: the passage of the withdrawal agreement, followed by negotiations over the future relationship, which may or, if the EU’s experience with trade agreements elsewhere is a guide, may not lead to an agreement on the new relationship between the EU and UK within her five-year term of office.

Alternatively, the outcome could equally be the withdrawal agreement followed by no deal; or no deal. Amidst the uncertainty, she inherits a Task Force and an established process.