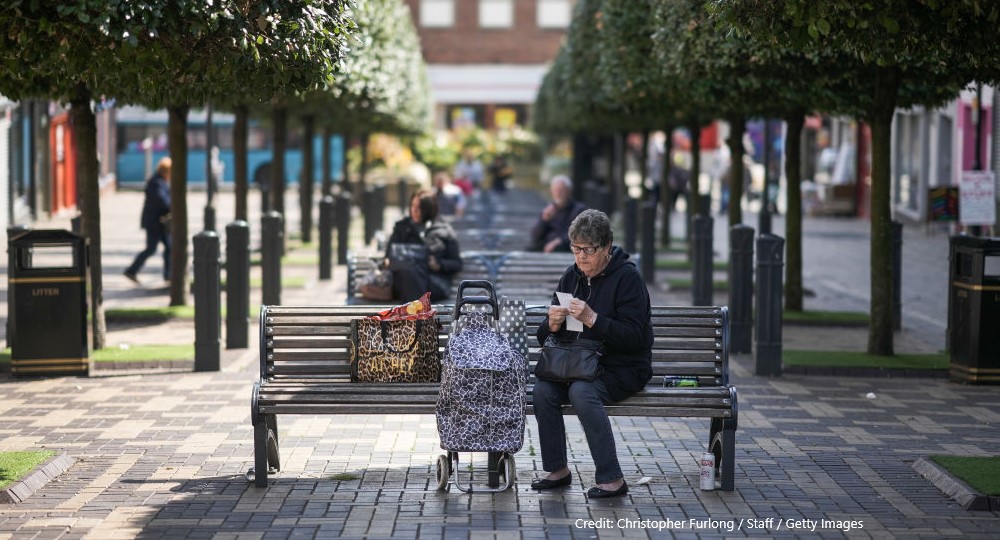 Prime Minister Boris Johnson has always had a transactional relationship with Conservative MPs and the Conservative parliamentary party. He comfortably secured the votes of a majority of this group – which included far more of his longstanding detractors at the time – in the 2019 leadership race.

This was at a time when the Conservative Party was staring down the barrel following Theresa May’s tumultuous leadership, which culminated in it securing under 10% of the national vote in the last European Parliamentary elections. They ultimately backed him as the ‘in an emergency break glass candidate’ to maximise their chances of retaining their seats in an election.

Their decision not only resulted in them – for the most part – retaining their seats in the snap 2019 general election, but also welcoming over a hundred new parliamentary colleagues. Most of these new Conservative MPs – comfortably the best represented intake in the parliamentary party – feel they owe a debt of gratitude to Johnson, to whose coattails they were clutching as they were swept into office.

We might be about to learn the extent of elasticity to this gratitude as the number of Conservative MPs calling for Johnson’s removal as leader over partygate grows. Currently, an outsized proportion of those who have submitted letters of no confidence in his leadership or explicitly called for him to consider his position are representing seats most under threat from the Liberal Democrats. 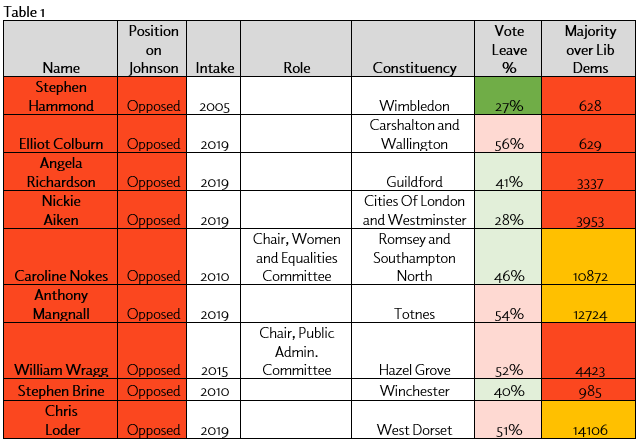 Many more Conservative MPs who are similarly vulnerable to the Liberal Democrats at the next election are known to be wavering in relation to Johnson’s continuation as premier given their critical comments over partygate. A number of these MPs represent areas where the Conservatives performed particularly poorly in the recent local elections, Greg Clark in Tunbridge Wells and Anthony Browne in South Cambridgeshire, for example. It is electorally necessary for them to publicly illustrate their frustration over Downing Street’s antics but, for now, they are holding back from fully inveighing against him.

In addition, several Conservative MPs most acutely at risk from the Liberal Democrats are in government roles – some very senior – such as Deputy Prime Minister Dominic Raab. They must choose between remaining loyal to Johnson to retain their ministerial positions or resigning and coming out against him to maximise their chances of retaining their seats. For now, they are opting for the latter – a position that could come under further considerable strain if the Conservatives lose the Tiverton and Honiton by-election to the Liberal Democrats in late June. 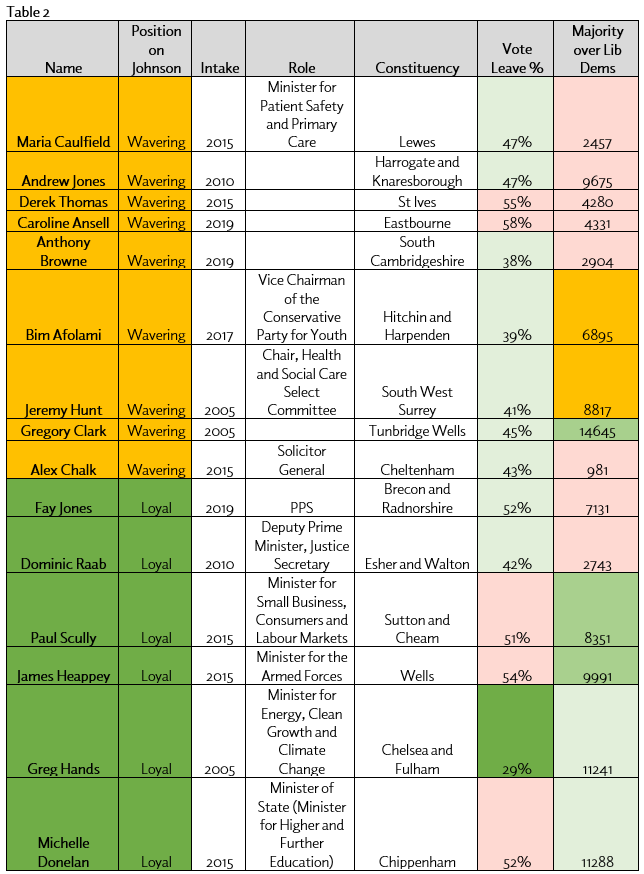 The situation with respect to the Conservative MPs most under threat from the Labour party at the next election is altogether different. Very few of those most at risk have nailed their colours to the mast and come out against Johnson continuing as leader. This likely speaks to the earlier point about their sense of gratitude to him given that a substantial portion of them were elected in 2019 after securing their seats – which by and large overwhelmingly voted for Brexit in 2016 – from Labour at the last election. 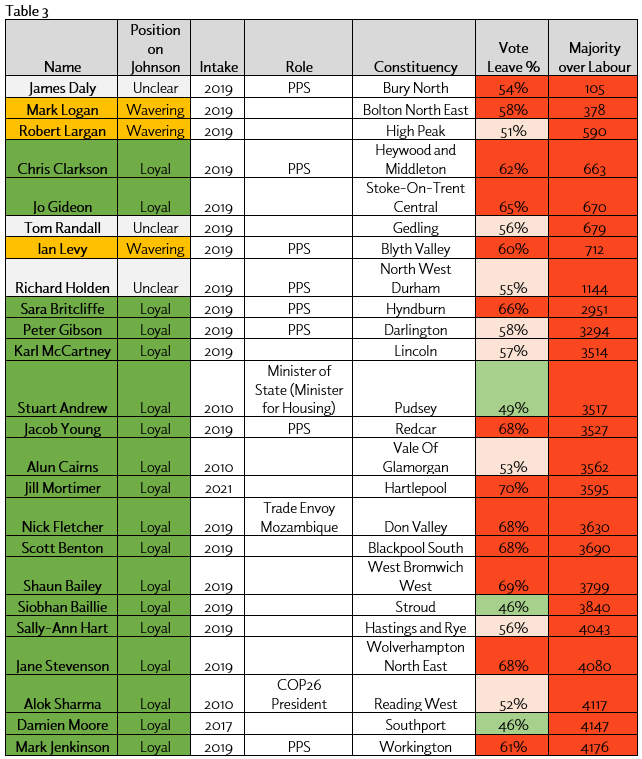 What is also different with respect to them, though, is the nature of their seats and how the areas they are in fared during the recent local elections. Somewhat lost in the reporting of the results is how comparatively well the Conservative Party performed in ‘red wall’ areas of the country like Newcastle-under-Lyme, North East Lincolnshire, Sunderland, Amber Valley and Hartlepool. In all these areas the Conservatives made considerable net gains at the expense of Labour, in some they even gained over ten additional councillor seats. The same sense of psephological urgency therefore does not apply to the Conservative MPs in these areas of Britain.

Ultimately, these Conservative MPs currently calculate that Johnson as leader remains their best chance of retaining their heavily pro-Leave seats at the next election and that an alternative leader – which could conceivably be somebody of a more Remain disposition, such as Jeremy Hunt – wouldn’t be the advantage to them that it would perhaps be in the southern English seats under threat from the Liberal Democrats.

This theme, however, could change if they come to think that Johnson is no longer upholding his end of the bargain, i.e. that of winning them elections. This bargain will be subjected to a major stress test at the Wakefield by-election in June given the archetypical ‘red wall’ nature of the seat, with its overwhelming support for Leave in the 2016 referendum and election of a Conservative MP for the first time since the 1930s to ‘deliver’ Brexit.

The Conservatives losing the Wakefield seat – which currently seems likely – will almost certainly broaden the opposition to Johnson’s continuation as leader, stretching to the limit the collective elasticity of support for him from Conservative MPs in the ‘red wall’. Just a few of Johnson’s colleagues from this huge flank of the parliamentary party getting the jitters and submitting letters of no confidence in his leadership would likely be enough to reach the 54 required to trigger a vote.

If Johnson wants to retain his premiership he should therefore focus on the data underpinning the actions of his colleagues and enter campaign mode – the setting he arguably performs best in – when MPs return to Parliament next week. The data suggests the matter of Conservative MPs voting on his leadership in the near future is now likely a case of when rather than if.