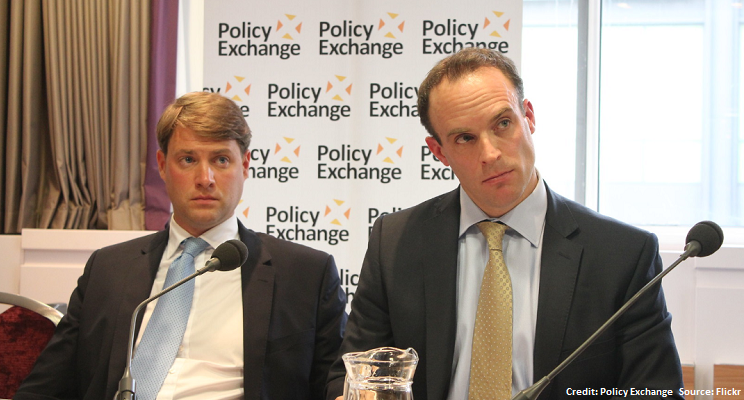 Will it be ‘easier’ for the UK to get a deal with the EU after it leaves, as the Foreign Secretary Dominic Raab claimed on Monday? In particular, he said that it would be ‘much easier’ to deal with the backstop issues than under the ‘undemocratic’ current arrangements. More generally, it would be easier to get a deal because the UK would be a non-EU country ‘less subject’ to the EU’s ‘demands and unilateral dictates’.

There are legal, political and economic elements to Raab’s claim. The legal issues are the clearest. At the moment, the withdrawal agreement is subject to Article 50 of the EU Treaty, which means qualified majority voting of member states and no need for ratification by their national parliaments.

After Brexit, it’s possible – but not certain – that a deal would need unanimous approval and/or national parliamentary ratification. That would depend on its content. For instance, an agreement only dealing with the movement of goods can still be approved by qualified majority and no national ratification.

A treaty involving services might require unanimity, depending on the details. If the agreement included rules on aviation market access, or free movement of people for a transition period, then member states would have to ratify it, although sometimes the EU agrees to apply a treaty provisionally pending national ratification.

In any event, in no way would the negotiation of a deal after a no deal Brexit be procedurally easier than at present. If anything it would be harder. The best-case scenario is replicating the status quo of qualified majority voting with no national ratification. Any departure from that means that individual governments and/or parliaments in the EU are in a stronger position to make demands in the negotiations.

Remember that in EU trade talks, the EU Commission is only the monkey: the organ grinders are national governments which give it the mandate to negotiate and which must (along with the European Parliament, and possibly national parliaments) approve the final treaties.

On the other hand, negotiations after Brexit would be substantively easier, in that the EU would no longer be constrained by Article 50, which it interprets to be limited to short term issues only. But whether that would really make the negotiations easier in practice depends on the politics.

So what about those politics? In fact, the EU will still have ‘demands’ after Brexit (as will the USA, China, India and everyone else). The EU Commission’s view is that the EU would still seek to address issues like the backstop and the financial settlement in the event of a no deal outcome.

However, it doesn’t have a formal negotiation mandate from EU governments, because Brexit hasn’t happened yet. We do know that the EU and its member states want to negotiate an aviation treaty with the UK in any event.

Otherwise it’s guesswork what the EU would be willing to negotiate. But there’s certainly no evidence to support the idea that it would immediately capitulate to everything the Foreign Secretary demanded.

What we do know is that many prominent Leave supporters claimed that an agreement would be easily negotiated after the referendum vote. Since their claims about what the EU would do proved wrong in the past, why trust their judgement now? And as for the EU falling apart, as some Leave advocates anticipated, so far the UK is a very lonely domino.

Finally, given that a no deal outcome would at least be applicable at the outset after Brexit, the economic impact could influence the political dynamics. The OBR recently forecast a negative outcome for the UK economy, although the EU agrees that the EU economy would be negatively affected too.

There’s an alternative view that the UK would benefit. It would be relevant whether opposition parties took a different approach to negotiations, particularly if they came to power after an early election.

In short, we can’t be sure how quickly (or slowly) a deal might be negotiated. But there are probably extra legal constraints; for now, there appear to be the same political constraints; and the economic impact (and the political consequences of it) remains to be seen. So the Foreign Secretary’s claim is speculative at best.

By Steve Peers,  professor of Law at the University of Essex and research investigator for The UK in a Changing Europe. This article originally appeared in the Telegraph.