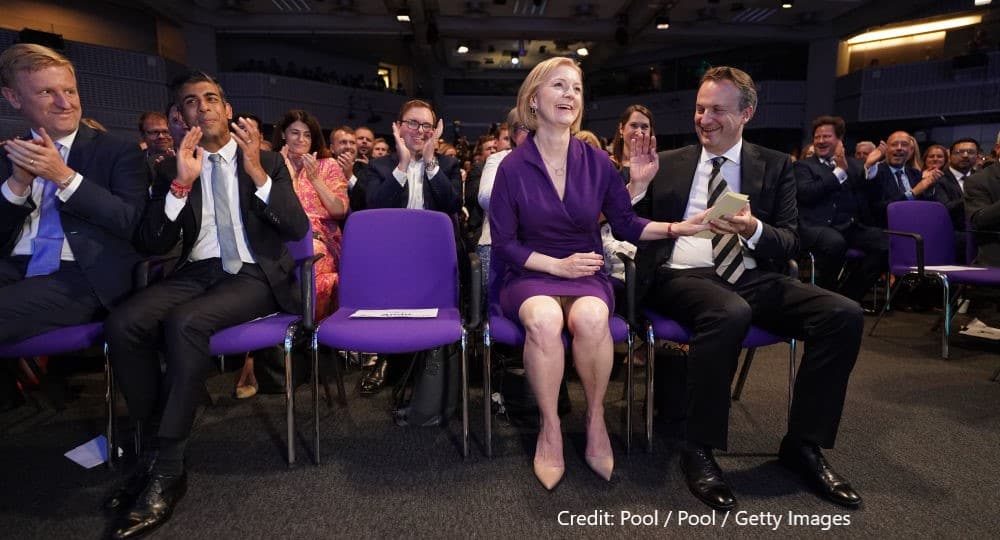 It’s been fun. The pop psychology of watching two candidates who demonstrably did not get on. The nods and winks about policy preferences as government was suspended throughout the summer. And, as the identity of the Prime Minister became clear, the flurry of interest in the character and personal history of Liz Truss.

But character isn’t everything. Structural constraints too will continue to shape our politics. And the unresolved tension at the heart of contemporary Conservatism might do so more than most.

For nearly a decade, the Conservative Party has not been what it used to be. Following the referendum of 2016, what had previously been its core economic ideas were swiftly ditched. Think back to when Theresa May stood in front of 10 Downing Street and laid out an economic agenda based on using the power of government to ‘stand up for the weak’ and ‘restore fairness’, making the Conservatives the party of ‘ordinary working-class people’. It was the first time any Conservative leader’s speech had contained an explicit appeal to the working class since the middle of the last century.

The 2017 manifesto – arguably the most statist and interventionist produced by a governing party in living memory – declared that the Conservatives ‘do not believe in untrammeled free markets. We reject the cult of selfish individualism. We abhor social division, injustice, unfairness and inequality.’ The Spectator magazine labelled Mrs May the most left-wing Tory leader in perhaps forty years.

And Boris Johnson continued where she had left off. ‘Levelling up’ – a recognition of, and commitment to address, stark regional inequalities – became his administration’s buzzword. A report from the IFS found that the 2% of GDP worth of tax rises announced in just two years amounted to what Tony Blair and Gordon Brown introduced over a decade. The UK’s tax burden reached its highest level in 70 years under his leadership. In addition, and as our divergence tracker repeatedly makes clear, there has been little sign of the kind of ‘bonfire of EU regulations’ some Tories had hoped for.

Of course, many Conservatives were deeply unhappy with this shift. The Free Market Forum group of MPs was created in response, to lobby for a smaller state and ensure the party does not ‘fall into a trap of thinking we can do socialism better than the socialists’. Yet, to date, we have not seen the kinds – or the intensity – of internal dispute one might have expected.

One reason for this is that other issues dominated the political agenda. Debates over Brexit and the response to the pandemic left little time for arguments over the size of the state. And while the latter provided a convincing justification for more interventionism, the former shifted debate away from the traditional ‘left-right’ dimension of politics, highlighting instead the bitter values division between Leave and Remain that cut across economic preferences and, for a while, seemed to drown out all else.

Second, the Conservatives resorted to a ‘tendency to favour wishful thinking over truth-telling’. From Mrs May’s insistence on her ability to achieve frictionless trade with the EU outside the single market and customs union, to Mr Johnson’s claim that the border implied by his Northern Ireland Protocol was not, in fact, a border at all, denial became government strategy. Criticism was condemned as either negativity (Johnson’s attack on ‘doomsters and gloomsters’) or the institutional resistance of a failed orthodoxy (see Liz Truss on the Treasury).

Finally, there was the personality of our previous Prime Minister. Perhaps Johnson’s ultimate political skill was his apparent ability to be all things to all people. Despite all the evidence to the contrary, he continued to portray himself as a ‘low tax Conservative.’ He was key to the ability of his party to hold together the Leave electoral coalition he’d put together – one united on values but profoundly divided over economic priorities.

Even Johnson, though, struggled to maintain unity towards the end of his tenure. It was notable that, having survived a leadership challenge in June 2022, his response was to promise tax cuts in a bid to curry favour with an increasingly agitated parliamentary party.

Now, everything is different. Johnson has gone, and, with the economy the single most salient political issue, there is no hiding from difficult debates by banging on about Brexit, or small boats, or footballers taking the knee, or the BBC. The severity of the economic crisis to come will, in other words, profoundly limit the efficacy of displacement.

And the need for clear economic choices will quite possibly lead to a confrontation between two visions of economic policy. The first, loudly cheered throughout the summer by overwhelmingly older and relatively prosperous Conservative Party members, sees tax cuts and a smaller state as the way ahead. The other – a product, ironically of Johnson’s electoral success – sees the need for continued state investment in ‘levelling up,’ for the state to ensure that the worst off in society are protected from the worst impacts of the cost-of-living crisis.

As Steve Baker, a prominent supporter of option one, put it presciently over a year ago, the ‘big future battle is inevitably going to be about spending and taxation … The full spectrum of legitimate political discourse is in the Conservative Party. In the midst of all this, the Tory Party is in danger of being torn in two.’

It is of course possible that Conservative MPs decide to grant their new leader a honeymoon. She has, after all, come to power at a time of real crisis. The omens, however, are not promising for Liz Truss. As the battles over Brexit revealed, many among her troops see ideological purity as a far more pressing concern than the need to maintain party unity. The battle for the leadership of the Conservative Party is over. The war over its soul may be about to begin.