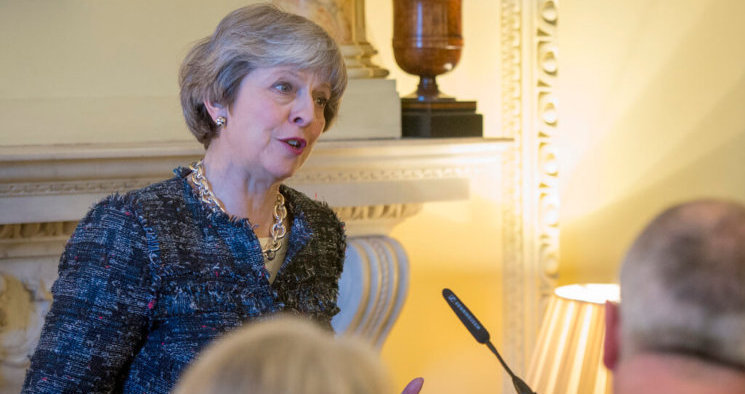 Something critical has just changed in the Brexit debate. Something which was always true has now become clear, and it changes the choice which MPs face.

Theresa May’s approach has always been ‘my way or the highway’. If Parliament does not accept her Withdrawal Agreement, Britain, she says, will leave the EU chaotically at the end of March.

So it’s her deal, or no deal. Thus she seeks to threaten both wings of her own party, and the rest of Parliament too.

There are two problems with this. The first is well known. Mrs May’s ‘deal’ isn’t a deal at all. It’s a plan to negotiate a deal during a transition period.

But to negotiate it from outside the EU, constrained by red lines Mrs May drew a couple of years ago in a notoriously ill-advised speech and by the Irish backstop on which the EU insists.

What’s just changed is the second half of the Prime Minister’s dichotomy. It is increasingly clear that the alternative to her deal is, and probably has always been, to delay the date which she arbitrarily set by sending the Article 50 notification.

Mrs May’s perpetual procrastination has run down the clock, and delay is inevitable so there’s no time left to make all the necessary laws, even to implement her ‘deal’. She’s always had this option in her back pocket, but has never been willing to acknowledge it.

What’s new is that it now seems not only will the EU contemplate a delay, they will consider quite a long delay, not just a few weeks or months to tidy up legislative details.

Not only has the hapless Olly Robbins let this slip, but it has already been reported as the view of at least one EU government.

A moment’s thought explains why. A chaotic exit is terrible for the UK, with the government planning to cope with shortages of food and medicines, and even for civil disorder. But it’s no picnic for the EU either.

It’s a set of localised but intense problems (notably for Ireland) they can well do without. But a few weeks delay would not make much difference: the UK needs more time than that to sort itself out.

So the price of having the Brits hang about in Brussels for a year or two longer, is one worth paying to avoid disruption for member states now.

What politician does not want to postpone trouble?

The real choice before Parliament – and how to take it

This changes the nature of the choice before Parliament. It’s not Mrs May’s deal versus chaos. It is one postponement of decision versus another.

Mrs May’s plan is that the UK leaves the EU before we know what leaving will actually mean. We then figure out what future relationship with Europe we want, from the restricted range of options created by her terrible negotiating strategy.

After that, we try to negotiate that with Brussels, from a position of weakness outside the EU.

The alternative is to take time out now to reflect on what we actually want, without ruling any options out and without the economic and social consequences of leaving in a few weeks.

Faced with that choice, only MPs who actively want no deal with Europe and are determined to rule out even the possibility of thinking again about European membership should now support Mrs May’s plan.

As for the rest, what politician wants to take a difficult decision today when it can be postponed until the options may become clearer?

It now seems quite likely that there is a majority in Parliament to seize the initiative from the Prime Minister, and force a decision. A decision to seek a delay, ruling no options out or in for the long run, is one which can and should secure a majority.

Indeed is now the only real alternative to a no deal exit in a few weeks, and is now widely expected by business. It is interesting that the Official Opposition abstained this week on the three months’ delay proposed by the SNP.

It is not enough, either for the EU or the UK, not least because the UK has to use the time bought usefully, not for more of the same.

What to do with the extra time

So Parliament can choose to delay, but not just to kick the can down the road. After all, that’s what Mrs May has been doing for two and a half years, so as to avoid splitting the Tory party.

The blunt truth is that Parliament has shown itself incapable of resolving the European question. It cannot decide on the UK-EU relationship: are we to be like Turkey or Canada, or Switzerland or Norway – or should the option of staying in after all be put back the people?

So instead of continued parliamentary manoeuvring – doing the same thing but expecting a different result – it’s time to put the question to the people in a different way.

A series of citizens’ assemblies has been proposed, in all parts of the country, deliberating on our European relationship, and the underlying issues such as globalisation, migration and what sovereignty means in a connected world.

All the evidence worldwide suggests such deliberative processes produce measured and thoughtful discussion, something sadly lacking so far.

At the end of the period, perhaps when some of the heat has died down, Parliament can take a similarly measured view, knowing what the considered views of the country are, how Europe and the world have changed, and decide what relationship with Europe the UK actually wants for the long run – in or out, close or distant, economic, social or political.

That’s where this whole process should have started.