Theresa May speaks the truth on the Northern Ireland Protocol 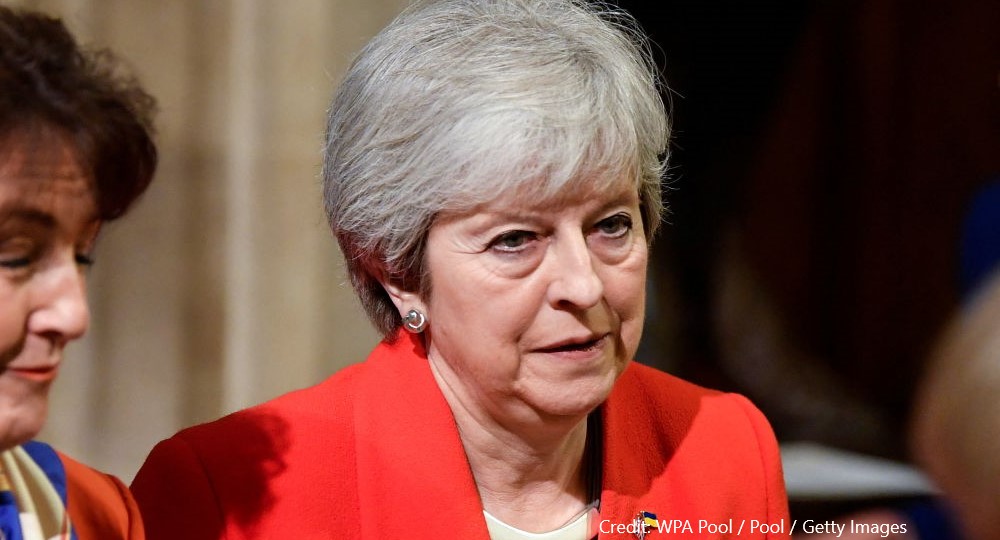 This situation is very serious, and potentially very damaging: EU threats to suspend the entire Brexit Trade and Cooperation Agreement carry major economic risks, and there are major risks to the UK’s international reputation, and to tensions inside Northern Ireland.

In Tuesday’s Queen’s speech debate, former Prime Minister Theresa May emphasised that legislation in breach of the Protocol would be a mistake, and reminded the Prime Minister that:

‘I put a deal before the House that met the requirements of the Good Friday agreement and enabled us not to have a border down the Irish sea or between Northern Ireland and the Republic of Ireland. Sadly, the Democratic Unionist party and others across the House chose to reject that.’

These were sharp words, but distinctly measured given what May could have said. What she omitted, though many present will have understood, was that Boris Johnson was among the ‘others across the House’ who voted to reject her deal, at least on the first two occasions that it was put.

Given the seriousness of the situation, the background deserves laying out.

Theresa May took over the premiership following the 2016 referendum on a firm pledge to deliver Brexit. Back then, few in Great Britain (though rather more in Northern Ireland) realised its potential threat to the Belfast/Good Friday Agreement. Most Northern Ireland parties had backed Remain, but the DUP firmly supported Leave.

Following 2017’s general election, they entered a ‘confidence and supply’ arrangement with May’s government, and her narrow Commons majority depended on their votes.

The core problem stemmed from Northern Ireland possessing the UK’s only land border with the EU. Keeping that border open was key to the Belfast/Good Friday Agreement which secured peace in 1998, and was clearly facilitated by EU membership.

Post-referendum came gradual recognition of an ‘Irish trilemma’: May’s initial ‘red lines’ of leaving the EU Single Market and Customs Union, designed to appeal to Conservative hardline Brexiteers; the need to avoid a hard border; and May’s commitment to protecting the Union by avoiding a border down the Irish Sea. Any two of these objectives could feasibly be achieved, but achieving all three was a logical impossibility.

This conundrum gained attention gradually before, and during, the Brexit talks with the EU. The solution was a ‘backstop’ written into the Withdrawal Agreement, providing insurance against a hard border.

The first version proposed by the EU would have maintained strong EU alignment for Northern Ireland alone, requiring a border down the Irish Sea. This was totally unacceptable to the DUP, and to May. Consequently, she negotiated closer all-UK alignment, with an all-UK customs arrangement supplemented by additional alignment in Northern Ireland. This offended hardline Brexiteers, but also didn’t satisfy the DUP.

Shortly afterwards MPs backed the ‘Brady amendment’ demanding renegotiation of the backstop. David Gauke, then in May’s cabinet, described this as ‘a unicorn’, and another senior member of her cabinet suggested to us that the proposal was ‘nuts’. But the government agreed in the interests of party unity to embark on further negotiations.

Unsurprisingly these largely failed – the backstop was a hard-won pragmatic solution, which the EU had already stated was non-negotiable. The Commons defeated the deal again in March, with the DUP and hardliners (including all of the above except Dorries) voting against.

After this came the ill-fated ‘indicative votes’, where MPs rejected all available Brexit options. Johnson and the above-named ministers voted for a no-deal Brexit. But the Commons had already roundly rejected this, and experts warned that it would cause severe economic damage, as well as a hard border on the island of Ireland.

When Johnson took over the premiership in July 2019, he insisted that the UK would leave the EU by the then Article 50 deadline of 31 October come what may. Both he and his new Brexit negotiator David Frost stressed the UK’s readiness for a no-deal exit. David Gauke has suggested that ‘it was the Benn-Burt Act that forced them to the negotiating table’ – this Act, passed against the government’s wishes, required an extension of the deadline to 31 January 2020.

Combined with the Supreme Court’s ruling against Johnson’s prorogation of parliament, this demonstrated that parliament would block a no-deal exit – potentially toppling Johnson’s government. David Frost recently confirmed Gauke’s reasoning, stating that the government’s approach was ‘to push the deal through and trust that we could sort out the detail with the EU later’.

This new deal, struck in October 2020, essentially mirrored that previously rejected by Theresa May, including the border down the Irish Sea. Johnson’s acceptance of it contradicted his previous promise to the DUP’s conference that ‘no British Conservative government could or should sign up’ to such an arrangement. The DUP’s Sammy Wilson claims that similar pledges were repeatedly made privately. During the 2019 general election campaign, Johnson inaccurately insisted that his deal would require no border checks.

Theresa May’s comments this week demonstrated her frustration at the DUP. Raoul Ruparel, then her adviser, has indicated that hopes were high for the party to vote for her deal on the third and final occasion – but it refused to do so, contributing to a further defeat.

The DUP’s refusal to compromise ultimately landed it in a far worse position. But the party had heard repeated promises from the now Prime Minister that the border down the Irish Sea would never come about. His chief negotiator has now clarified that the team signed up to an international agreement without accepting the need to abide by the detail of its terms.

May must surely feel immense frustration at this week’s developments, having worked tirelessly to avoid just this situation, and been punished for it by the same hardliners now in Cabinet. Some from her team have already been outspoken in their criticism of Johnson.

In retrospect, one of May’s biggest mistakes was that her commitment to keeping her party together prevented her from publicly criticising those within it who repeatedly scuppered her deal. But while DUP members clearly have some culpability, Johnson and his allies bear even more. While the fault for negotiating an alternative deal so unacceptable to the DUP, and destabilising for Northern Ireland, lies with Johnson alone.

If the government proceeds as it intends, MPs will shortly be asked (for a second time) to vote in contravention of the ‘oven-ready’ legal agreement signed by the Prime Minister. As with the policing of the Ministerial Code, MPs have constitutional duties here, not just party political ones. And in a complex situation where facts are easily obfuscated, they also have moral duties to explain and speak the truth. Theresa May began that on Tuesday. We need much more of it.

By Professor Meg Russell, Director of the UCL Constitution Unit and Senior Fellow at the UK in a Changing Europe, and Lisa James, researcher at the Constitution Unit. Their book, The Parliamentary Battle over Brexit, will be published by Oxford University Press next year.