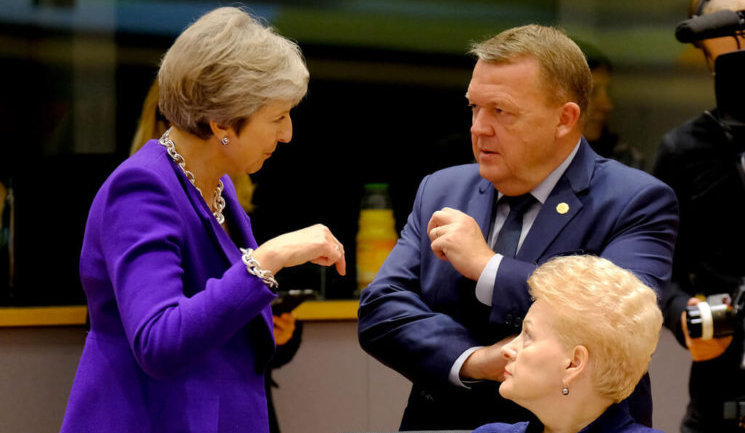 Out of the swirling, angry chaos of the Brexit negotiations, the outlines of a possible deal have started to emerge over the last few days.

Progress on Brexit had come to a virtual stop over the issue of the ‘Irish backstop’ and the inconvenient fact that the government’s majority depends on the both the support of the Democratic Unionist Party (DUP) – who cannot countenance any kind of border between the mainland UK and Northern Ireland – and the European Research Group (ERG) of Tory MPs – who strongly oppose the sort of soft Brexit which would make a border between the UK and Northern Ireland unnecessary.

The first serious attempt at a solution was the Chequers deal that the Prime Minister put forward in the summer. But this fell flat with everyone: prominent members of the Cabinet resigned, backbench Tory MPs objected and the EU eventually said non.

The main difference between Chequers and the new set of proposals is that the whole of the UK would remain in a customs union with the European Union for as long as it took to find an alternative solution to the Irish border problem (aka forever).

The mainland would leave the single market but Northern Ireland would remain in full compliance with EU rules on goods and agricultural produce which would minimise, but not entirely eliminate a border in the Irish Sea.

This would give both the ERG and the DUP some, but not all of what they want. But with a no-deal scenario looming, Theresa May must be hoping that the threat of the oncoming apocalypse will help detach MPs from their hard line positions.

At the moment, the power to accept or reject any deal rests entirely with the 650 members of the House of Commons. But at some point those MPs will have to answer to the people who voted for them and research carried out by Professor Christina Pagel and myself for UK in a Changing Europe in the summer suggests that both Leave and Remain voters will be sorely disappointed if MPs accept this compromise.

Our research consisted of a survey asking people to rank up to 13 priorities for the UK over the next five years in order of importance to them. We then combined these into overall priorities for Leavers and Remainers.

We originally set out to try and find common ground between the two groups, but in the end our results revealed how differently Remainers and Leavers see the challenges facing the country.

For Remain voters, ensuring strong economic growth was the top priority, but for Leavers the UK taking control of its own laws and regulations was the most important challenge, ranking ahead of other options such as having enough jobs with fair pay and having decent housing for everyone.

The compromise plan would see the UK leaving the single market and the jurisdiction of the European Court of Justice. This which would satisfy the Leavers’ top priority – the UK taking control of its own laws. It would also mean the end of freedom of movement, allowing the UK to develop a stricter immigration policy towards EU migrants.

Immigration was one of the biggest factors which drove the Brexit vote, but while our research revealed the unsurprising fact that Leave voters do care about restricting immigration, they now see it as less important than the UK being able to do its own trade deals. Crucially, this compromise agreement would not allow Britain to do this whilst remaining in a customs union with the EU.

The ability for a post-Brexit UK to be able to negotiate its own trade deals is clearly important for Leavers. Prominent Leave campaigners painted a vision of a Britain freed from its ties to the sclerotic economy of ‘Old World’ Europe, and bravely forging ahead in partnership with dynamic emerging countries.

This was an important push back against Remainer arguments that Brexit will cause serious economic damage by reducing trade with our biggest market.

But if these exciting new trade deals are no longer on offer it becomes more difficult to explain how the post-Brexit economy will expand or even just keep chugging along at its current rate. Professor Sir John Curtice has shown that Leave voters who believe the economy will get worse after Brexit would be much more likely to switch their vote to Remain in a new referendum, than Leave voters who believe the economy will get better or stay the same. Without a plausible narrative describing how Brexit could bring prosperity, more Leave voters might end up changing their minds.

But Leavers are only half the picture (or more accurately, 52% of the picture). With nearly all economists agreeing that leaving the single market will damage growth, this means the compromise deal will be unattractive to Remainers as well. Remain voters also prioritised jobs and public services and clearly a weak economy will negatively impact on both of those.

The enormous People’s Vote march a couple of weeks ago demonstrated that Remainers are now as much of a political force as Leavers. Meanwhile the recent well-publicised Survation poll for Channel 4 gave Remain an eight point lead over Leave in a future referendum.

Compromises can only work when there are at least some areas of agreement between the differing sides. Our research revealed a divided nation with Leavers having very different priorities to Remainers.

This means there are no Brexit outcomes which will not end up alienating a substantial number of people, and this proposed deal is no exception. There is an old adage that whilst money does not buy happiness, it is better to be rich and unhappy, than poor and unhappy – and it is also true that it would be better to have a divided country which has decent economic growth, than a divided nation with a shrinking economy.

Our research found that ensuring a strong economy was the top priority for all respondents (including both Leavers and Remainers), so the best advice for MPs who want to upset as few of their voters as possible would therefore be to make sure that any Brexit outcome they vote for, will not damage economic growth.