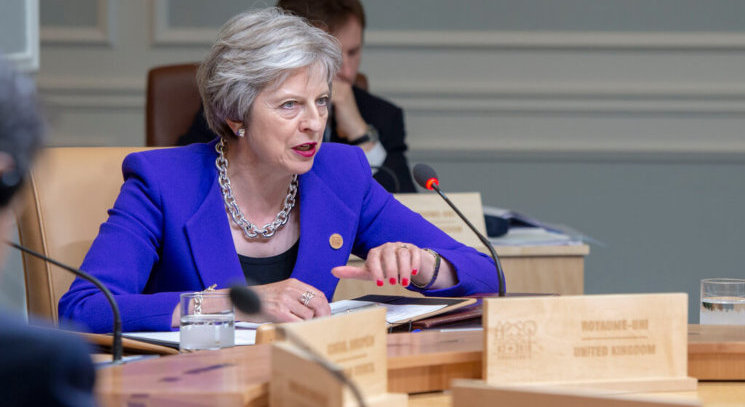 So, after an unedifying 24 hours of political theatre (more Joe Orton than Shakespeare) the government has published its proposal for a “temporary customs arrangement” to serve as a “backstop” in the event that no permanent solution is in place at the end of the transition period in December 2020.

Why all the fuss about a temporary arrangement that everyone hopes will never even have to be used? Of course, the answer is that almost every word in quotes above means the exact opposite of what it says.

The backstop that isn’t a backstop

First, the backstop is not a backstop. It’s the default option. Even if the UK could make up its mind tomorrow what sort of permanent customs arrangement it wants, there isn’t any realistic prospect of it being in place by December 2020. And even if it was, none of the options currently on the table would solve the problem of the Northern Irish border—which is the point of the “backstop.”

Second, despite the fact that the government’s proposal uses the word “temporary” no less than 22 times, it’s likely to be anything but.

When the Prime Minister claims that “this… is in no way the Government’s intended or desired future customs arrangement, and in any case the temporary nature means that it cannot be,” it’s pretty obvious she’s protesting too much.

In fact, the “temporary” arrangement will be enshrined in formal, legally binding text, incorporated into the Withdrawal Agreement—unlike the government’s “intended or desired” arrangements, which won’t.

It’s not just about customs

Going beyond the legal niceties, think about the practicalities. Governments and businesses, both here and in the EU, would plan on the basis of an ongoing customs union—and they would be quite happy to do so because it would mean a minimum of disruptive change.

Meanwhile, discussions on the future relationship are likely to take years. It’s not clear that any future UK government have much incentive to invest time, money and political capital in something that will both be very expensive and very unpopular with business. The EU27 certainly won’t.

Third, it’s not just about customs. For a start, the paper also refers to VAT. And, as many have pointed out, regulatory alignment for goods and especially agriculture is at least as important as customs for avoiding a hard border, either on the island of Ireland or between Dover and Calais.

The government’s own paper accepts that “regulatory standards” will “need to be addressed”—it’s difficult to see that happening in any other way than a parallel acceptance that the UK will remain within the relevant provisions of the internal market.

And again, there will be no appetite to revisit whatever arrangements are made farther down the line. As the PM herself made very clear in her Mansion House speech, for the most part, the UK’s economic interests will be to stick to EU rules for the foreseeable future.

So, rather than a “temporary customs arrangement”, then, what we’re actually looking at is—as it was originally described by government sources—a Customs and Regulatory Alignment Period (Indefinite). We remain, effectively, in the EU for customs and for much of the Single Market—but not for services or for the free movement of persons. Sam Lowe of the Centre for European Reform has described this as the “Jersey option.”

But will the EU27 accept some version of this? The EU’s real, rather than theological, red lines are two-fold (and are entirely understandable and justified from their perspective). First, the UK’s deal outside the EU must be visibly inferior to that it had as a full member. Second, any arrangement that gives the benefits of the Single Market must be subject to the same rules, including governance and enforcement.

Crucially, that doesn’t necessarily rule out a deal along these lines – although it is likely to mean the UK having to make further concessions down the line, including both financial contributions and the central role of the ECJ. But the ball would be in the EU’s court, and it’s not clear that they should simply ignore it or dismiss it out of hand. As Ivan Rogers puts it, this doesn’t look like such a bad deal for them, offering a potentially “good deal for the EU with a major strategic partner”—if, potentially, offering in turn something “too close to membership advantages to a non-member.”

None of this means that this is a done deal by any means. Even if, objectively, this looks hugely advantageous for the EU27 from an economic perspective, will they really accept that the UK can have even partial Single Market membership without free movement?

Legally and practically, it would be exceptionally complex. The dividing line between goods and services is hardly clear-cut. And of course Theresa May still has to sell this domestically—or, more plausibly, bounce it through an unhappy party and divided country by pointing out that there really isn’t any alternative.

But, nevertheless, out of the fog, finally, we see something like a blueprint for Brexit from Theresa May. It would be a very long way from the vision set out in her Lancaster House speech. It’s the lowest of lowest common denominators, satisfying almost no-one.

It leaves us as a “vassal state” across large swathes of economic policy, both domestically and externally. It will reduce but not eliminate the economic downsides—it hangs the City out to dry, for a start. On the upside, the Commission will hate it too.

So in all sorts of ways, it’s crappy, and not just by name. But, in contrast to anything else we’ve seen so far, it is at least not obviously unworkable or incredible. And no unicorns are required. Perhaps the UK is finally getting serious.

By Jonathan Portes, senior fellow at The UK in a Changing Europe. This piece originally featured in Prospect.