These European Parliament elections could remake our politics 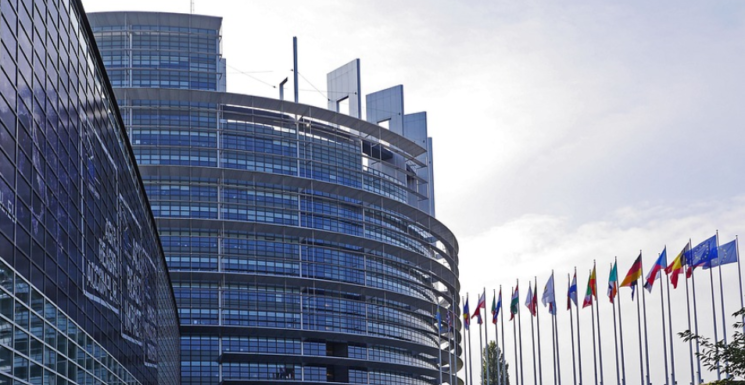 Few would have predicted on the morning after the referendum that almost three years down the line, the UK would be gearing up to take part in the 2019 European Parliamentary (EP) elections.

Yet, with the country now set to remain a member of the EU until at least 31 October (or earlier, if the Withdrawal Agreement deal can be passed through Parliament), it looks very much as though the UK will be sending another 73 MEPs to Brussels for at least some of the 2019-2024 parliament. Controversial, to say the least.

While arguably so much of the reason the referendum took place was the enormous influence of UKIP, one of the immediate consequences of the vote to leave the EU was a sudden reversal of the previously noted decline of the two-party system. In the following snap election of 2017, Labour and the Conservatives racked up 82.4% of the vote between them, clawing back 18 seats from the SNP in Scotland in the process. Two-party politics, it seemed, had made an almighty comeback.

Looking at the state of play now in 2019 as we head into first local authority and then (probably) European Parliament elections, this seems to no longer be the case. New parties have arrived and are eating into the vote share of the old guard, who are struggling to retain much of their support from that extraordinary 2017 contest. The newly-created Brexit Party are cleaving their way through Conservative and Leave voters, while the Remain vote is splitting steadily across many suitors.

Figure 1 below visualises the two-party (Labour and Conservatives combined) vote share from the beginning of January 2017 until the latest polls (18 April). A smoothed line of best fit shows the underlying trend, which has seen the reported two-party vote intention drop consistently since election day in 2017 to a weighted average of just over 70% today. 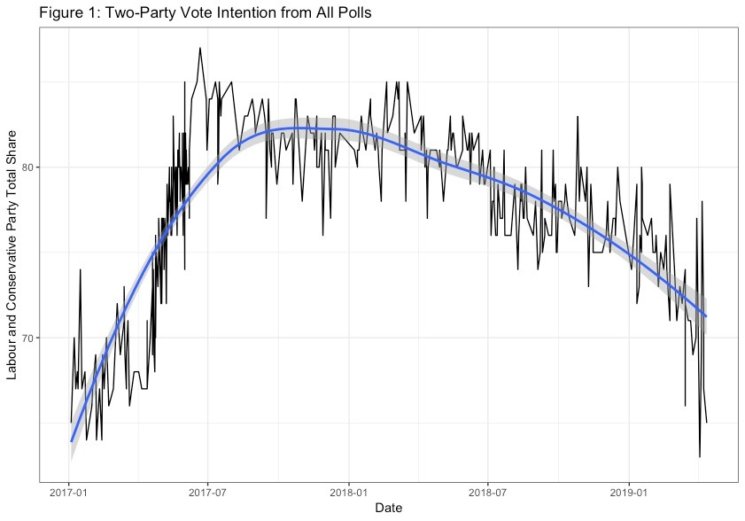 As well as declining vote share for the two main parties, two new parties have entered the scene to fight the EP elections next month: the Brexit Party and ChangeUK. Both offer incredibly strong positions on the EU in completely polarised directions – leave with no deal, and remain a member outright (subject to a so-called people’s vote) respectively. This offers an exciting chance to see how votes will transfer across party lines and how the 2016 referendum vote will break down across parties offering different positions on the European question.

In addition to this uniqueness, the EP elections are an example of what we sometimes call ‘second order’ contests, in that with the question of ‘who forms the government’ removed, voters are minded (and have tended) to increasingly support smaller parties and are more likely to punish incumbents. This makes the electoral situation much more volatile and open to change (welcome: new parties).

They are also an excellent barometer of underlying support of smaller – and our newest – parties in British politics. In General Election settings, we often hear such arguments as “Vote Labour to keep the Tories out”, or “A vote against the Conservatives is a vote for Jeremy Corbyn” – which deter voters from backing smaller parties. This squeezes smaller parties, meaning that their actual vote share is unlikely to be close to their true, underlying support and popularity in the population. With no ‘power’ up for grabs – at least not in the sense of who governs Britain – this is not so applicable to EP election contexts and so we should expect more ‘natural’ preferences to come out.

With all four factors mixed in together – (1) a controversial, unexpected election in the context of declining two-party support, (2) the entry of new parties, (3) the clear and polarising policies of said new parties, and (4) the ‘second order’ nature of EP elections – we have ourselves a phenomenally intriguing contest ahead.

In the latest two EP election YouGov polls, Nigel Farage’s Brexit Party has actually taken the lead. It was reportedly up six points on 16 April and two points on the following day. In the same polls, the Green Party came in fourth on 10%, behind Labour (22%) and the Conservatives (15-17%) – the latter of whom seem to be on course to far eclipse their worst ever national vote result (21% in the 2014 EP elections).

‘Beginner’s luck’ does not seem to have touched the fortunes of the other new entry however, with ChangeUK on 6-8% in the same reports. Of course, this is only one poll, and so the analysis should only be treated as indicative. We remain over a month out from the contest, so much can and inevitably will change.

Figure 2 shows how voting intention for the 2019 EP elections breaks down by reported vote at the 2017 general election, according to the YouGov poll on 16 April. What is most striking is how well over 50% of the Conservative 2017 vote is apparently leaking away to other parties, the main beneficiary being the Brexit Party – with about half of the 2017 vote moving across. UKIP take a significant slice of that pie as well, while just a handful of voters indicate switching from the Tory party across to one of the five other parties. 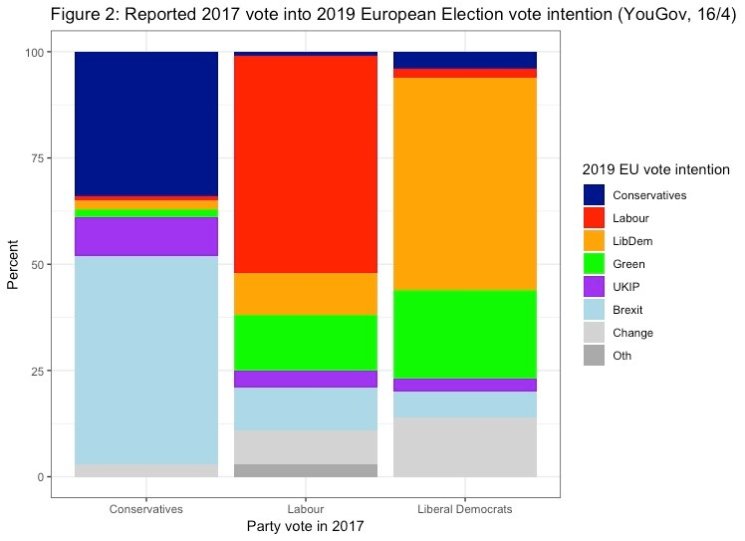 Labour appear to be doing a better job of hanging on to their 2017 voters as it stands, with just over 50% indicating they will vote Labour again for the EP elections in May. The Brexit Party, the Greens, Lib Dems, and ChangeUK each seem to be picking up a sizeable chunk (around 10%) of 2017 Labour voters.

Again, around 50% of 2017 Liberal Democrat voters report that they will stick with the party for the upcoming EP elections, but here we see much more significant gains for both the Greens (21%) and ChangeUK (14%), and again another handful of voters reportedly moving across to each of the other five parties.

Figure 3 shows how current EP election voting intention is structured across reported 2016 Referendum voting. Here once again we see some fascinating insights into how the British public is breaking. 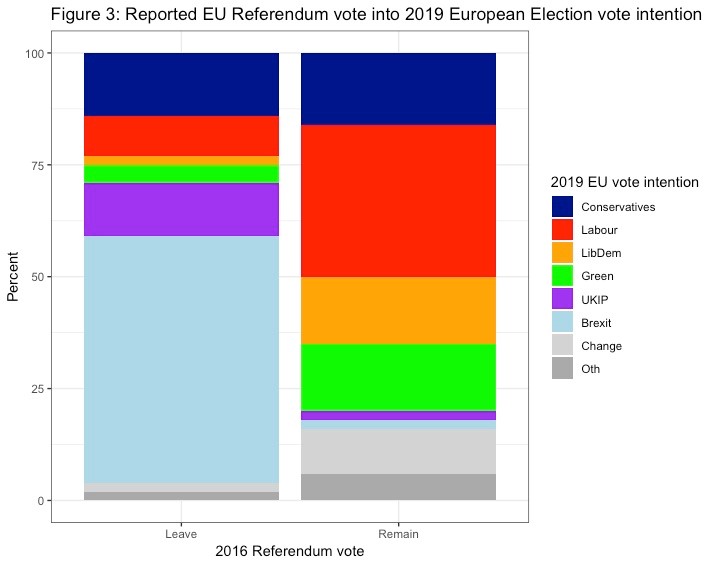 Well over 50% of the reported 2016 Leave vote is going to the Brexit Party, according to this YouGov poll. Clearly, everything Farage has done has been incredibly effective in attracting Leave voters and pulling them away from the Conservatives. Elsewhere, a decent portion of the Leave vote appears to be behind the Conservative and UKIP, while a smaller amount of said voters currently support Labour.

The Remain vote is well split across each of the main nationwide parties, and while the strongly pro-EU messages from ChangeUK are certainly attracting the kind of voters one might expect (mostly 2017 Lib Dem voters and Remainers), they are behind even the Greens and the Lib Dems both in terms of overall vote share and in terms of attracting 2016 Remain voters.

The Conservatives interestingly appear to be attracting a higher proportion of the Remain vote than Leave, though the difference is negligible. The plurality of the Remain vote though is behind Labour, according to this data, despite their strongly ambiguous and non-committal stance on the prospect of remaining in the EU and/or a future referendum on the issue.

By Patrick English, an Associate Lecturer in Data Analysis at the Exeter.