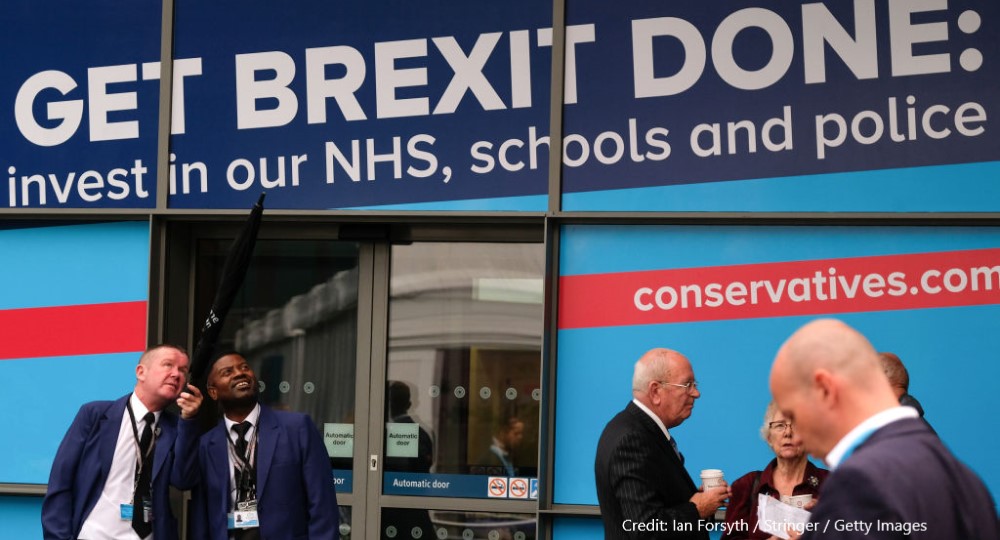 This year’s party conference season has lacked the usual magic ingredients. No warm white wine or cold coffee. No free gifts from the Government of Gibraltar or the Royal Mail or one of the other random corporate giants who’ve paid through the nose for a stall outside the main auditorium. No media vox-pops of party members wandering between those stalls to pocket those freebies. And no popping into fringe events on the off-chance of spotting a political celebrity and wolfing down yet another chicken goujon.

Yet if you are one of those who tried to replicate the real thing on your laptop (guilty as charged), there might have been a nagging feeling that something else was missing – something that you couldn’t quite put your finger on. Yes, that’s right: the B-word.

Brexit has become so familiar as to be part of the party conference furniture in the last half decade. Anyone attending the Conservative Party’s annual bashes in recent years, will be familiar with with endless queues for fringe events giving besuited teenage boys and equally well-turned-out retirees a chance to cheer on assorted members of the ERG.

This year, however, Brexit barely seemed to feature – and not just on the fringes but, even more obviously, in the main conference hall itself. This accords with rumours that Tory MPs have been told not to use B-word anymore.

But what do the numbers say? And what might they tell us about, firstly, the government’s overall political strategy and, secondly, about one particular politician’s personal ambitions? 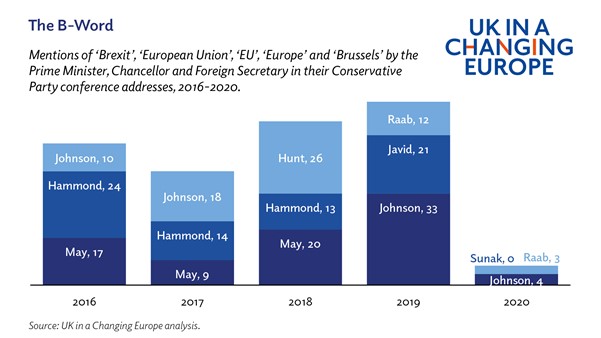 Mentions of Brexit as a buzzword dipped in 2017, as Theresa May – after struggling on the campaign trail, and while struggling on stage – attempted to construct a plausible governing vision to fight a newly-bolstered Jeremy Corbyn in a hung Parliament.

But mentions peaked last year, as the Tory Party geared up to fight a ‘Brexit election.’ Boris Johnson used the B-word 16 times and made eight mentions of ‘the EU’, seven of ‘Europe’ and managed to include a couple of swipes at ‘Brussels’.

While not entirely banned – the Prime Minister did, after all, say the B-word four times this year – talk of Brexit and the EU from the conference floor has fallen by a staggering 89% in a year.

Just as significantly, perhaps, Rishi Sunak became the first occupant of one of the three big offices of state since the EU referendum not to mention Brexit, the European Union, Europe or Brussels in his (short) conference address.

Take Jeremy Hunt’s speech as Foreign Secretary in 2018. The writing was not yet on the wall for Theresa May, but it was clear which way the wind was blowing. And while it was not then clear that Johnson would win, he was near-certain to stand as ‘Mr Brexit’.

In response, Hunt took the opportunity to scatter his speech with talk of Brexit, with the key takeaway that we should ‘never mistake British politeness for British weakness’ – a clear attempt to address his own weakness ahead of an internal Tory party contest.

Compare that to Rishi Sunak. As a Leaver, he has no such concerns. Should the Brexit coalition that Boris Johnson built at last year’s general election collapse in on itself, triggering a premature end to his premiership, the Chancellor will be able to portray himself – to voters and members alike – as a truly post-Brexit Tory leader.