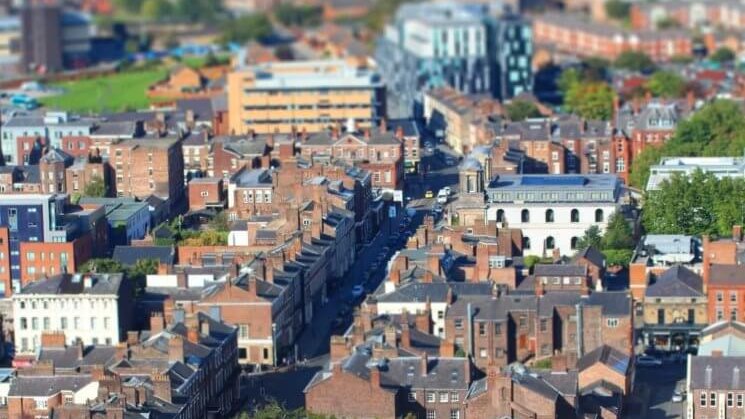 Brexit exposed differences between people but also places. The big cities were the strongest base for Remain while towns and less urbanised areas provided the main platform for the Leave vote.

Populations of the former tend to be young (and getting younger), better educated, more diverse (and increasingly so), more likely to work in professional-creative ‘cosmopolitan’ occupations, and less likely to own their home.

They are also more socially liberal, pluralistic in their identity and relaxed about social change (in particular immigration).

In contrast, the populations of towns and rural areas are more prone to nostalgia, uneasy about immigration and tend to be more authoritarian and socially conservative. The Brexit vote was not a one-off event, but reflected emerging differences in outlooks between metropolitan and town dwellers.

A complex economic and social dynamic has pushed cities and towns in different directions over several decades. To understand this growing divide in outlook by place we need an account that recognises the changes experienced by particular areas over an extended period of time.

For this purpose, at the Centre for Towns we have adapted a measure of economic and demographic decline developed by the the Joseph Rowntree Foundation which uses a set of indicators to determine the relative rate of decline of particular places between 1981 and 2011.

These are designed to capture the rate of population growth (or decline), economic activity (or inactivity) and enterprise, and the inflow of younger and more educated workers – critical factors for success in the global economy.

Areas are ranked according to their rate of growth or decline relative to one another, with the final index taking the sum of rankings on the indicators. Most of the fast-growing areas are found in big cities, while many of the declining areas are coastal or former manufacturing areas.

Figure 1 plots the Remain and Leave vote share for each local authority against its ranking of relative decline. The pattern revealed is quite clear: areas that have experienced the most decline in recent decades voted Leave in greater numbers, whereas areas of relative growth were more likely to vote Remain.

On average, the Leave vote was 20 points higher in those places that have experienced the greatest declines in terms of human and economic capital since the 1980s. As such, the Brexit vote can be viewed as a symptom of the divergent socio-economic trajectories of cities and towns. 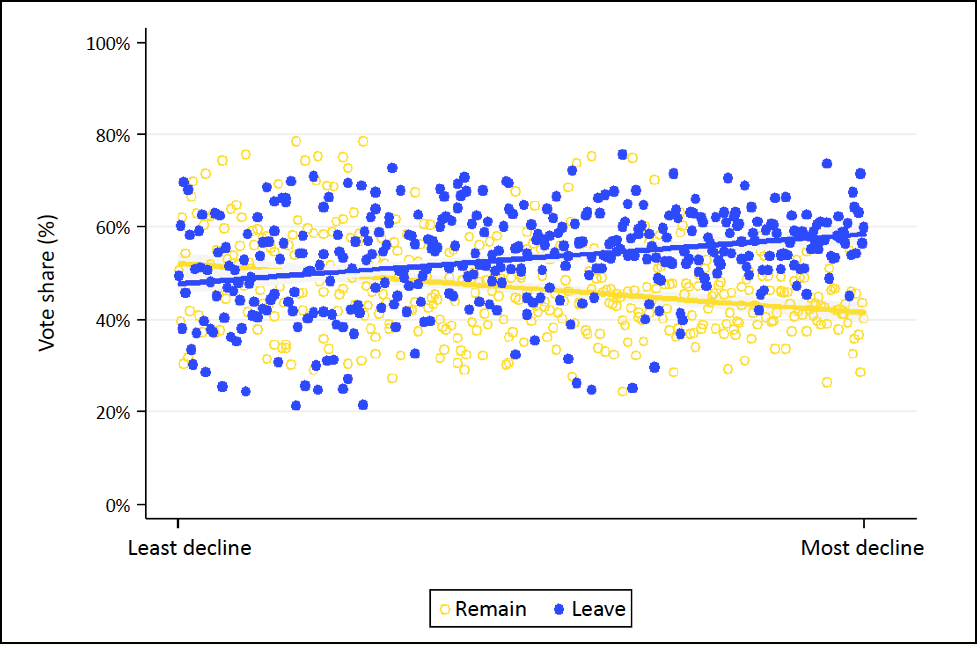 How do the populations of towns and cities differ in their outlooks? In partnership with Sky Data we fielded a national survey in October 2017 asking people whether they thought politicians care about people like them and whether they feel they are doing better financially than other people.

By doing this we were able to establish whether people feel better or worse off – politically and economically –compared to the past and also, importantly, in their expectations for the future.

Figure 2 plots feelings of political influence (‘efficacy’). People living in big cities were less likely to believe politicians didn’t care about people like them in the past (50% compared to 60% of towndwellers holding the same view), but their view has shifted substantially – with an increase of near 20% in the number of people saying politicians don’t care about people like them now.

This group see their political clout as on the wane – which could be interpreted as a direct reaction to the Brexit vote. Citizens’ expectations about future political influence were slightly more upbeat for both groups – at least compared to the present.

It is significant, though, that the current political context leaves the residents of towns and cities feeling equally alienated by politics, with little optimism about what the future holds.

Figure 2: Feelings of political influence in towns and cities 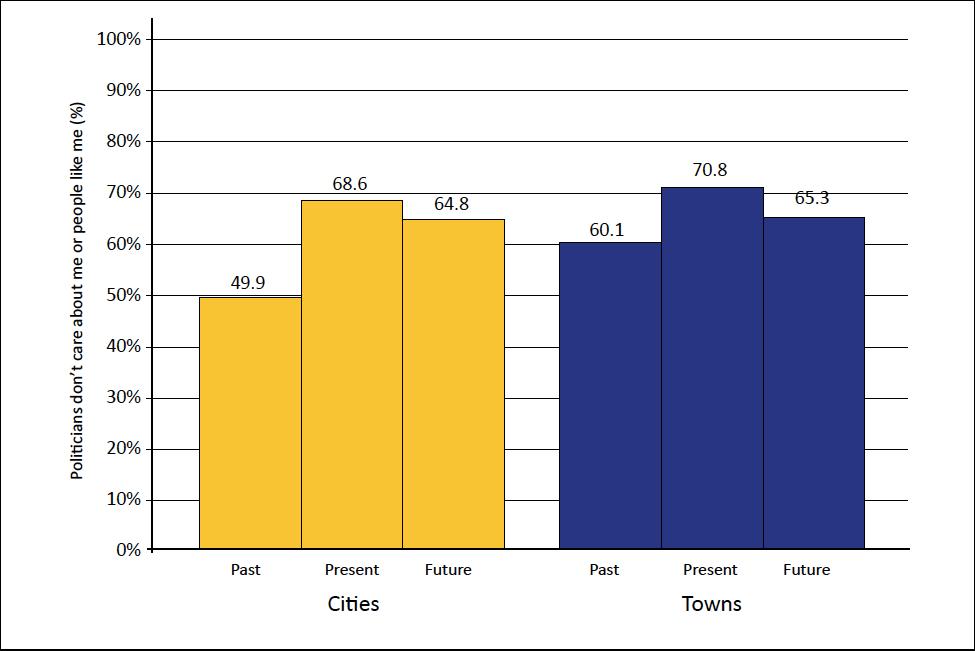 Figure 3 looks at perceptions of economic insecurity and again reveals a divide between the populations of towns and cities. People living in towns were, on average, more likely to believe they or people like them are worse off than other people – both in the past, present and future, though currently see themselves as slightly better off than in the past.

Those in cities, on the other hand, increasingly view themselves as less financially well off – a trend that again might be attributed to Brexit and the impact it is having on social attitudes.

While Brexit may have represented the start of a rebalancing between the ‘winners’ and ‘losers’ of globalization, our survey revealed a rise of economic pessimism across both groups.

Figure 3: Perceptions of personal financial circumstances in towns and cities 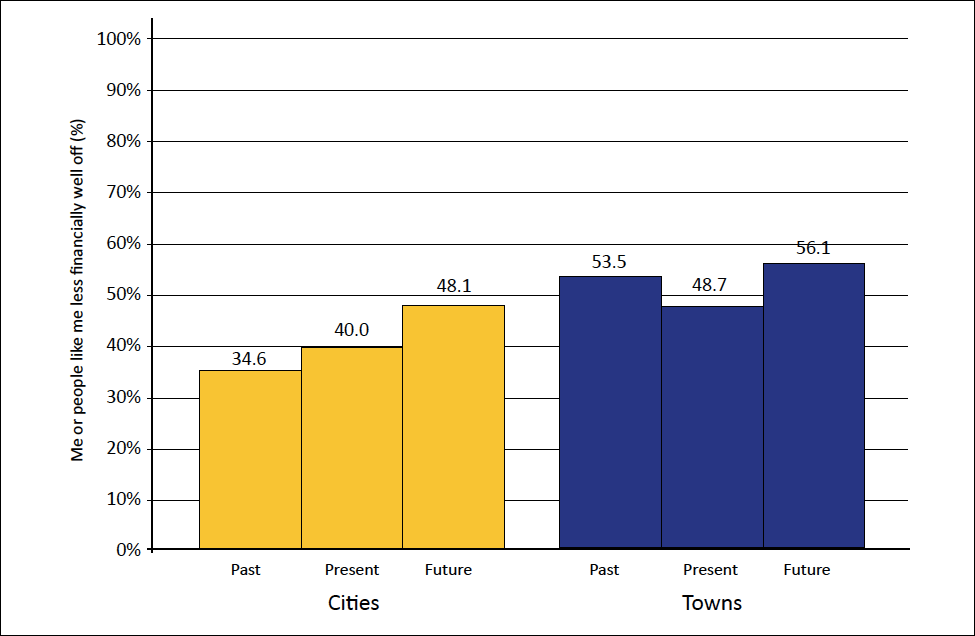 Our survey showed that in some ways Brexit has turned the politics of towns and cities on its head. While people living in cities feel that their political influence and financial situation has worsened compared to the past, towns-dwellers have in the short-term become slightly more optimistic about their financial situation and are more confident about their political voice being heard in the future.

This is a negative sum game overall, however, as people living in towns remain negative about the future compared to the past – such that Brexit does not come with newfound optimism for ‘sunlit uplands beyond’ for those living in areas that tended to vote Leave.

The evidence we have offered here sees Brexit as a product of relative deprivation (in towns – having endured decades of relative decline) and a creator of it (in cities – which look towards a less optimistic future after Brexit).

Britain’s new pessimists are city dwellers, though only to the extent that they are now almost as pessimistic as townsfolk. So far, Brexit has only succeeded in making everyone feel worse off.

Professor Will Jennings, Professor Gerry Stoker and Ian Warren are part of the Centre For Towns. You can find a full copy of our Brexit and Public Opinion report here.