With a nod to physics, this is called the Gravity Theory of Trade: close objects have a much stronger gravitational pull than objects farther away.

Yet, since the Brexit referendum, small and medium sized UK firms have begun to divert their exports away from our close and enormous neighbour – the EU – to places further afield.

In one sense, this seems to be fulfilling Brexiters’ dreams. However, for these diversions to be commercially successful, a strong dose of policy support will be required.

Our team at Aston Business School was given rare access to HMRC individual firm trade transaction-level data for the period 2012-2017. We analysed 339,493 quarterly export transactions made by more than 26,000 UK exporters.

At this very granular level, we examined how different product categories had switched destination markets across different sizes of exporting firms.

The analysis covered the period from the referendum announcement (back in 2015), through the referendum itself, and up to the triggering of the formal Article 50 notice of withdrawal from the EU (in March 2017).

There is immediate evidence of reaction to the referendum announcement itself: total quarterly exports to the EU decreased, while those destined elsewhere kept growing.

The triggering of Article 50 at the end of first quarter 2017 created an even stronger trade diversion. Both overall number of products and of new products exported show a clear redirection away from the EU.

However, this impact was not uniform across firms and products.

Micro and small firms diverted their exports to a significantly greater extent than larger firms. Understanding this outcome is the key to the required policy interventions.

World tariff levels vary markedly by type of product. Under a no-deal scenario, the UK and the EU would revert to trading under rules governed by World Trade Organisation (WTO) agreements.

This means that some sectors would be exposed to high tariff levels under post-Brexit arrangements.

Agriculture, textile and footwear sectors are in the front line, and also around 30% of products in the transport equipment manufacturing industry.

However, typical size of firm differs across sectors, and, as it happens, the sectors most likely to face steeply higher tariff barriers contain a disproportionate number of micro and small firms.

Moving from the zero-tariff regime of the EU to a WTO trade regime would be expected to exert a strong push to micro and small exporters to divert towards alternative markets.

And that is what appears to have happened: about 45% of the growth in total export values for micro and 19% for small firms have experienced a diversion.

Medium-sized exporting firms have made similar changes but to a lesser extent (see Figure 1). 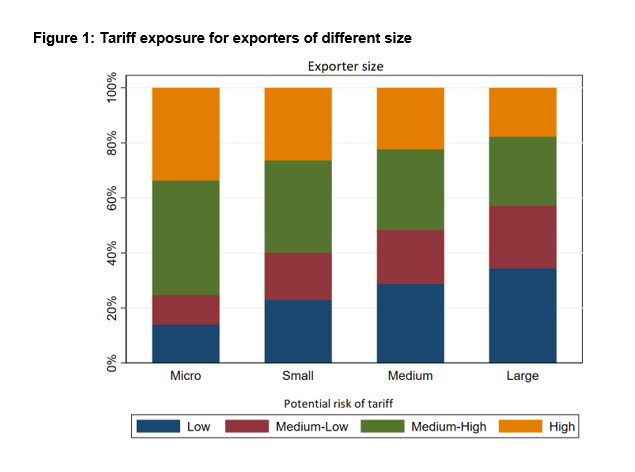 The micro and small exporters have mainly redirected their exports towards Commonwealth and BRICS countries (Brazil, Russia, India and China).

This may perhaps be because of historical linkages, or because emerging economies might have greater growth potential. To understand these decisions will require direct interviews with exporters. 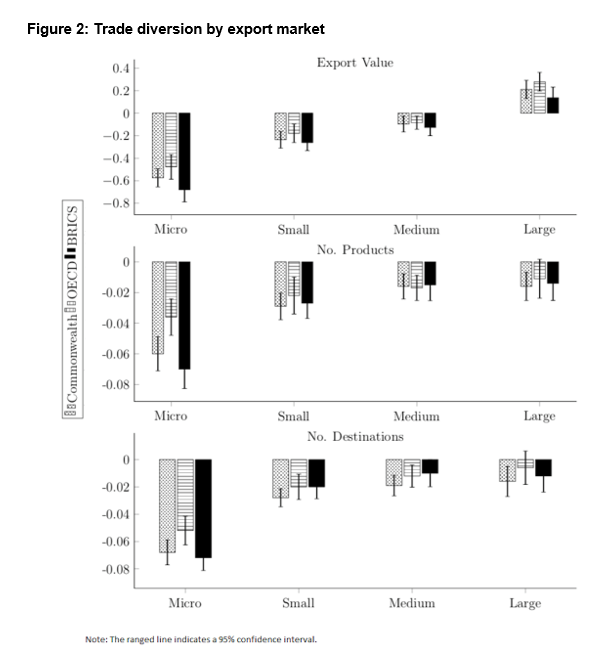 But whatever the decision logic used by the firms, this export redirection will be costly and risky to the exporters.

Transport costs are higher, there are new markets to understand, new trading relationships to develop, new and perhaps difficult currency and credit risks to deal with.

In a somewhat longer-term sense, there can be a negative impact on firms’ productivity.

Other research conducted at Aston Business School has demonstrated that exporting into sophisticated and competitive markets drives innovation for small and micro firms.

The EU is just such a market, whereas many of the markets identified in the trade redirection following the Brexit referendum are not.

Similar negative outcomes can be expected if firms are dropped from the advanced supply chain networks linking them to the EU single market.

Overcoming these risks, for firms not large enough to have sophisticated international marketing and trading capability, calls for focused policy support.

The government and its trade-promoting agencies need provide information about and guidance in access strategy for new trade destinations.

Interestingly, these actions are those that were undertaken by countries like Japan and Korea in their successful export-led growth.