Treason, plotting and fear of foreigners: the referendum is a Shakespearean drama 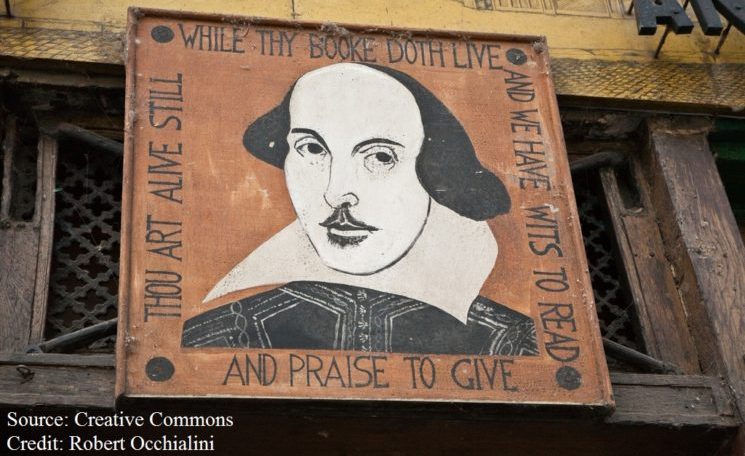 2016 will be an extraordinary year. On June 23 a decision will have to be made by the British people: to stay in or to leave the European Union.

The year will also see the commemoration of 400 years since the death of William Shakespeare, arguably the greatest English playwright and the perfect English export to world culture.

In a sense these two events pose an ironic juxtaposition, with one potentially having the effect of isolating the British Isles (if the vote is one to leave the EU), and other – “Global Shakespeare” – wanting to bring the world together in a celebration of the Bard.

As a lecturer in theatre and someone who cannot vote in June, I find it fascinating instead to watch the drama of the two campaigns fighting it out – the bickering, the scaremongering and the general negativity that defines both.

David Cameron’s announcement in February of the referendum date created a flurry of activity involving the main protagonists, with alliances, break-ups and resignations among the politicians and prominent campaigners.

The only protagonist relatively silent for now is the British public, waiting to see how the plot will develop.

I’d like to be a little self-indulgent and suggest a parallel between the drama playing out in front of our eyes and the theatrical world of Shakespeare.

When Jan Kott, the Polish theatre critic, voiced his belief that Shakespeare was our contemporary, that his plays and his characters speak to us now just as they have spoken to every generation of theatre lovers since the late 16th century, he pinpointed a crucial characteristic of Shakespeare’s writing: the issues he captures allows both his plays and their characters to be in continuous flux, to be interpreted and appropriated by different generations and different worlds.

Thus Shakespeare was there at the main historical events in the 20th and 21st centuries. During and after the world wars, during the resistance against communist rule in eastern Europe, and at the fall of the Berlin wall, his plays were used to discuss the political, social and historical realities of the times.

Politicians and leaders would morph into characters on stage, and audiences would spot the subtext of the productions and find solace in the knowledge that they were part (even if only in small part) of the resistance.

In a similar way, I believe we can recast the EU referendum debate in Shakespearean terms. We could begin by analysing the two political contexts: that of the late 16th/ early 17th centuries and the current political situation.

Although they seem to be very different, the social and political problems of Shakespeare’s time are surprisingly similar to the ones we experience today. Immigration, one of the staples of the Leave campaign, was an important issue in Shakespeare’s time as well. England, and particularly London, was home to a large number of immigrants from Germany, Holland, France and Italy.

These were all viewed with suspicion, particularly those with a more Mediterranean colouring – who were often labelled papists.

This stemmed from England’s tense relationship with the Roman Catholic Church, arising from Henry VIII’s personal conflict with the Pope over his divorce from Catherine of Aragon.

The Vatican was considered a foreign and centralising power, imposing laws on England from the outside, and in order to divorce Catherine and marry Anne Boleyn, Henry left the Catholic Church and instead founded the Church of England – answerable only to him.

Thereafter, immigrants of Mediterranean appearance were considered the enemy: spies of Catholic Spain, or of the Vatican. And beyond this perceived security threat, English workers were also unhappy about the number of skilled European workers and feared that their jobs were at risk. Does this sound familiar?

A director wanting to portray the EU referendum drama on stage through a Shakespearean play, could approach Henry V.

Themes in this highlight the fraught relationship between England and France, with the relative civility of the diplomatic relations between Henry and the King of France matched by the bitter and bellicose announcements made by each to their own nobles.

For a contemporary parallel, see the “productive” meeting between Cameron and Hollande during the EU negotiations, followed shortly by the announcement by one of Hollande’s ministers that in case of Brexit, the borders at Calais will be opened and the migrant camps will move to Dover.

Rather ominously, the relationship between Henry and his own nobles is marred by treason: when they think he cannot win the fight with France, they leave him and join the enemy (cue Iain Duncan Smith, Boris Johnson and Michael Gove).

And again, the suspicion of foreigners appears, this time directed at those rather closer to home. There is a poignant discussion of the position of Scottish, Welsh and Irish characters’ soldiers. Despite fighting on the side of the English, they are presented not only as unintelligible (because of their strange accents) but also foolish and of a lower rank than the English soldiers.

The thorny issue of immigration can also be identified in other plays. In Othello, for example, Iago’s jealousy of Othello is mainly due to an inherent feeling that as a Moor and an immigrant to Venice, Othello does not deserve titles, success and a white wife.

Brabantio, Desdemona’s father, is furious not only because she married Othello in secret, but also because he is a Moor and an “other”. Othello is betrayed because he is different racially: an intruder, and a savage immigrant who (Brabantio fears) convinced Desdemona to marry him through “witchcraft”.

The Merchant of Venice also deploys this idea of the “other”. Shylock, the Jew, behaves differently from the natives of Venice, always angry and apparently only caring about his money. However, it is quite clear from the very beginning of the play that Shylock is an abused character – witness Antonio’s outspoken antisemitism.

The possibilities of imagination in connecting Shakespeare and the EU referendum are plenty and perhaps useful in adding a new voice to the debate. However, it is perhaps more important to become directly involved in the discussions around the referendum rather than just observe the play unfold.

Dr Carmen Levick is a theatre lecturer at the University of Sheffield. Co-published with The Times.