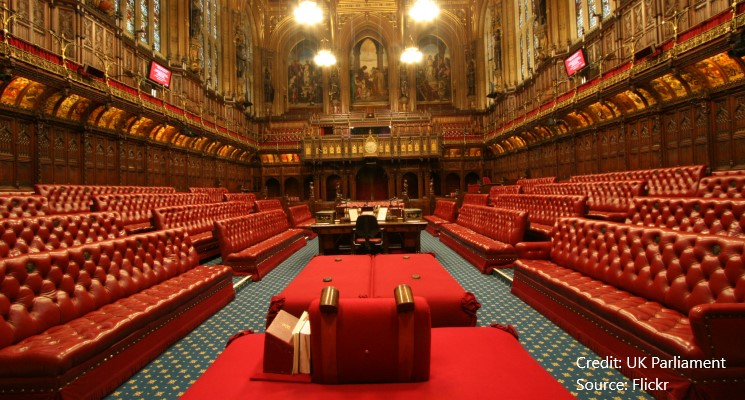 In a recent report Jill Barrett argued that Parliament’s scrutiny of treaties was ‘woefully inadequate’ both because Parliament’s powers are weak and because it uses them ineffectively.

On 17 March, Parliament took a step towards addressing these concerns. The House of Lords endorsed a report with the effect of establishing a new committee to review treaties negotiated and signed by the UK in 2020.

This new International Agreements Committee (IAC) offers an opportunity for Parliament to both scrutinise and influence trade and other international agreements as competencies return to the UK after Brexit.

Parliamentary scrutiny is important because treaties directly affect our daily lives. The government has already begun negotiating trade agreements with the US, Japan, and other major economies, that will affect jobs, services, and the price and availability of goods in shops.

Parliamentary select committees including the Lords Constitution Committee, the Joint Committee on Human Rights, and the Commons International Trade Committee, have recently opined on how Parliament should carry out this crucial function, and all agree that major changes are needed to improve Parliament’s ‘anachronistic and inadequate’ system of treaty scrutiny (in the words of the Constitution Committee).

As we’ve explained elsewhere, Parliament’s role is defined by the ‘Ponsonby Rule’. Almost a century old, this is enshrined in the Constitutional Reform and Governance Act 2010 (CRAG). But, as Maddy Thimont Jack and Hannah White put it in Parliament and Brexit, CRAG relegates Parliament to a ‘weak form of sign off at the end of the process’.

Parliament may have to legislate to implement some agreements in domestic law, but it cannot influence the content of an agreement. While the Commons can theoretically delay ratification indefinitely under CRAG, ministers can, in ‘exceptional circumstances’, override it.

This means Parliament cannot reliably stop a treaty being ratified, even if it believes doing so isn’t in the public interest.

Compare this to the powers of the European Parliament (EP), which until Brexit carried out the parliamentary scrutiny of EU-negotiated international agreements on the UK’s behalf.

As well as the scrutiny and investigative work of its committees, particularly the Committee on International Trade (INTA), the EP has formal veto powers over most agreements, like association agreements or those with important budgetary implications.

It also has a formal right to demand information, receiving regular progress reports from negotiators and confidential documents. Informally, it also reviews draft negotiating directives proposed by the Commission to the Council.

In January, former First Parliamentary Counsel Sir Stephen Laws suggested that the UK might channel the work of treaty scrutiny through a new body modelled on the Intelligence and Security Committee (ISC) to provide both ‘private challenge to the government’s negotiating strategy [and] reassurance to Parliament’.

Although the ISC is a committee of Parliament, it is a different creature from Parliament’s select committees. Highly classified material is made available exclusively to its members, who are selected by the government, and it has a statutory power to make reports by laying them before Parliament, but only after getting confirmation from the Prime Minister that they can be published. (At the time of writing, the ISC has two reports awaiting such confirmation: its Annual Report for 2018-2019 and a report on the Russian threat to the UK.)

Aside from the evident downsides for Parliament, establishing such a committee to provide ‘private challenge’ for treaty negotiations would require a radically different approach from the government.

Its Command Paper on making new free trade agreements highlights treaty making as a prerogative power and endorses CRAG, offering only vague commitments about allowing Parliament ‘to consider [the government’s] approach to negotiations’ and warm words: ‘the best [free trade agreements] will be those that draw on the extensive expertise and experience of both Houses’ and ‘have [their] full support’.

As its formal powers are unlikely to change soon, Parliament must find its own way to make available its ‘extensive expertise and experience’ to ensure the UK secures the ‘best’ agreements possible.

The European Union Committee’s (EUC) report on its experience of Brexit treaty scrutiny work provides an initial roadmap, and while the new IAC still awaits its members, its establishment in principle shows that Parliament is working to find its own solutions.

As well as taking on the CRAG scrutiny functions previously undertaken by the Secondary Legislation Scrutiny Committee and, more recently, by the EUC, the IAC will provide a focal point for stakeholder engagement. One of IAC’s early challenges will be finding ways to influence negotiations, rather than simply being informed of a ‘done deal’.

Engagement with those who might be affected by new agreements will be crucial to making that work effective. This will include industry and NGOs, and building relationships with the devolved administrations and legislatures, which have a legitimate interest in the agreements that are struck on their behalf and might affect devolved competencies.

The IAC will also have to work collaboratively with departments across government to develop new working practices that both respect prerogative powers and ensure that parliamentarians can follow negotiations and take an informed position on any final agreement.

It will look to use the ‘sensitive information’ and ‘private briefings from negotiating teams’ that the Department for International Trade has committed to providing, reiterated in its recent paper on a UK-US Free Trade Agreement.

It will also need to build new and productive relationships with departments across Whitehall as it develops expertise across the full range of possible agreements, including on security, the environment, and other areas of public interest.

As a cross-cutting Lords committee, the IAC will work under the umbrella of the EUC in 2020, scrutinising the post-Brexit ‘roll over’ agreements as well as all new international agreements.

It will be well suited to detailed and technical scrutiny work and will have a better chance of securing the necessary time for debates on significant treaties, meeting one of the Constitution Committee’s key recommendations. And, unlike the ISC, its work will be open and transparent to all.

The IAC’s work will provide both parliamentary oversight of the government’s work and an opportunity to inform the House and the public more widely about the issues and merits, successes and challenges that arise from the UK negotiating new international agreements as an independent nation state.