Trouble ahead for the Tories post-election? 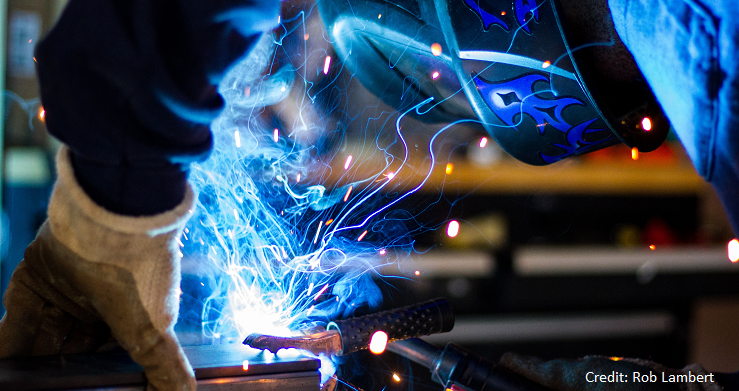 As the election approaches, all the talk is of Labour’s ‘red wall’.

Boris Johnson is targeting a host of traditional Labour strongholds in the north and the midlands and hopes to lead his party to victory in the election in parts of the country that have not elected a Conservative MP in years, or decades in many cases.

So what if he succeeds? What difference might that make?

The simple answer is that assembling a pro-Brexit coalition might be a path to victory in the election but also to problematic parliamentary politics.

There seems little doubt that a majority of one would suffice to allow Boris Johnson to “get Brexit done” in the sense of taking us out of the European Union by the end of January.

But it is then that his Brexit coalition might turn into a constraint.

According to the much-hyped YouGov MRP poll from a couple of weeks ago, among the top 11 Labour seats most likely to fall to the Tories are Barrow and Furness, Ashfield, Wakefield, Newcastle-Under-Lyme, Penistone and Stocksbridge, Don Valley, Derby North, Bishop Auckland, Ynys Mon and Rother Valley.

Obviously, we don’t know whether the Tory strategy will work, but imagine it does.

Imagine a world in which we have Tory MPs representing all these places, and potentially other traditional Labour strongholds.

Remember, insofar as the Prime Minister manages to build a new coalition, it will be on the back of Brexit and a dislike of Corbyn.

In a sense, this coalition will represent a values tribe, and one very different from, say, the electoral coalition that gave David Cameron his unexpected election victory in 2015.

And while Conservative voters may be united by their views on Brexit, that does not mean a unified approach to the economy.

Indeed, one can well imagine the average voter, and even new Tory voter, in Wakefield or Don Valley having profoundly different attitudes towards public sector spending, taxation and the like than your average Shire Tory.

Under the terms of Mrs May’s deal, Britain would have been within a ‘single customs territory’ with the EU, and would have maintained comparable standards for manufactured goods.

Boris Johnson, for his part, has made clear that he envisages a far weaker relationship with the European Union post-Brexit.

As the Conservative manifesto makes clear, there will be no customs union and no alignment with single market rules.

And this is assuming that a deal is secured at all.

Indeed, what the Prime Minister has said quite clearly is that, in the event that no trade deal is achievable before the end of next year, the UK will simply end transition and begin to trade with the EU on WTO terms.

This is an approach that will please part of his putative Brexit coalition. In particular, it seems designed – not coincidentally – to appeal to the kinds of Brexiters in the European Research Group who caused so many problems for Mr Johnson’s predecessor.

Regulatory autonomy and the freedom to strike ambitious new trade deals are emblematic issues for this group.

But the Johnson deal comes at a price.

According to UK in a Changing Europe analysis, 10 years after Brexit, the trade impact alone in terms of per capita income will be in the region of -4.9 per cent for the May deal, -6.4 per cent for Johnson’s, and -8.1 per cent for a WTO outcome.

At a minimum, these figures indicate that there will be difficult choices to be made, choices that might make it harder to honour the kind of investment pledges the Conservatives have made precisely to woo former Labour voters.

And there is more.

By any reasonable definition, the agreement negotiated by May put us on the path towards a relatively ‘hard’ form of Brexit.

However, it included a number of measures to protect manufacturing, if only as a means of avoiding the need for an additional border for Northern Ireland.

Under the Johnson plan, those protections will no longer apply.

Industry bodies have not been slow to express their concerns.

In mid-October, the aerospace, automotive, chemicals, food and drink and pharmaceutical industries wrote to the government to warn that the kind of relationship being contemplated with the EU could pose a “serious risk to manufacturing competitiveness”.

The letter outlined growing concern that the government had dropped existing commitments to maintain regulatory alignment.

It concludes that this approach “will result in huge new costs and disruption to UK firms”, and expands the point, underlining that it “would be disruptive to our complex international supply chains and has the potential to risk consumer and food safety, and confidence, access to overseas markets for UK exporters and vital future investment in innovation in this country.”

These warnings, remember, refer to the potential impact of a deal with the European Union.

In the event that Boris Johnson is true to his word, refusing extend the transition and no trade deal is done by this time, the impact will be worse still.

The Society of Motor Manufacturers and Trades has argued that a WTO exit would see UK car production cut by a third.

So far, so economic.

But think back to our new Conservative MPs – in Wakefield, Don Valley and the like.

According to our broad-brush analysis, on average, 29 per cent of constituents in the seats that the Conservatives are forecast to gain are in manufacturing occupations.

This compares with 22 per cent of constituents in the seats that the Conservatives currently hold. 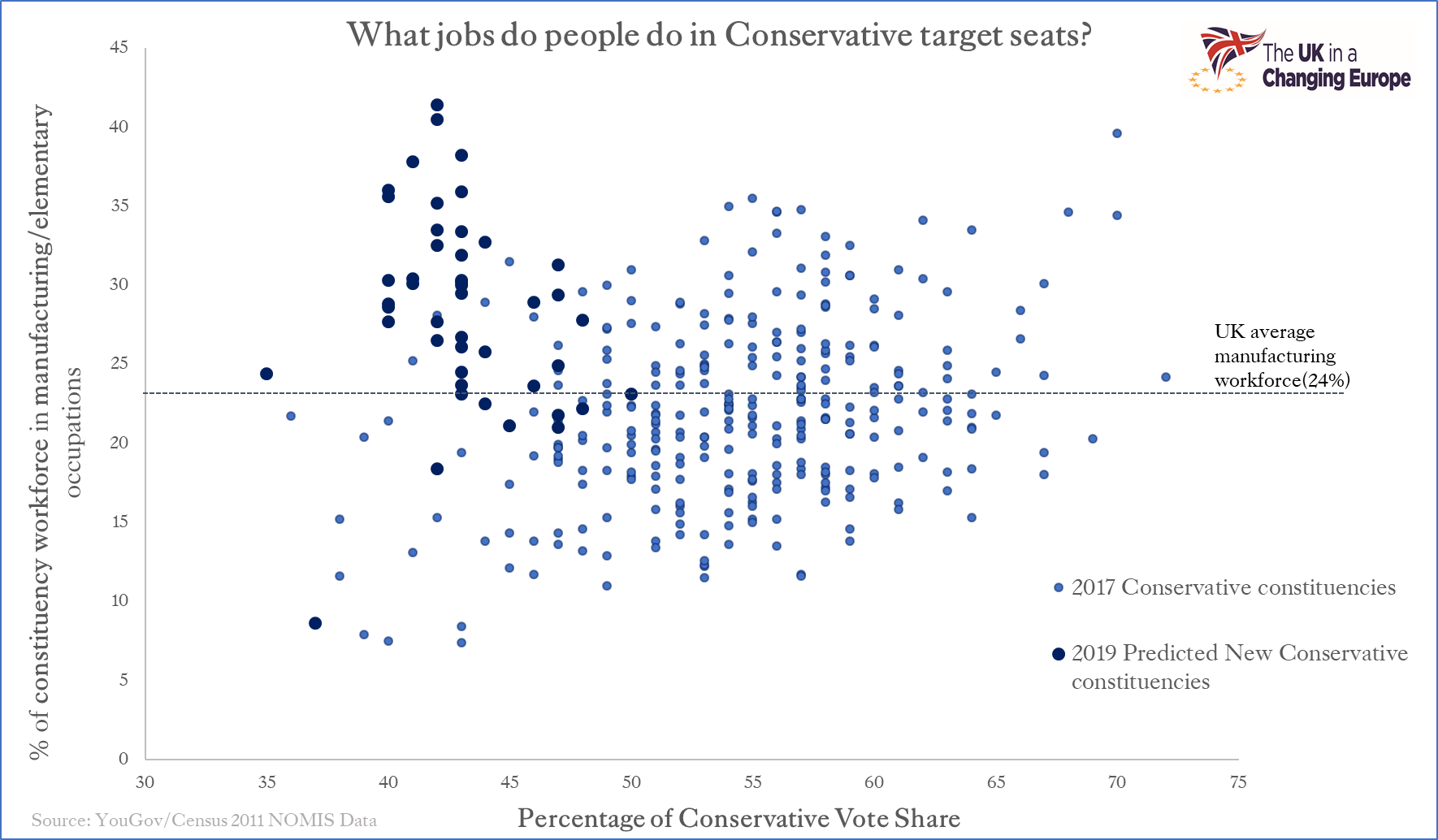 The question then is at what point, if ever, Conservative MPs representing constituencies with a strong manufacturing base start to have doubts about the direction of travel over Brexit.

Those who have been elected on his coat-tails will doubtless feel the need to be loyal to the Prime Minister, at least initially.

But at some point, they might start to think about what a Brexit with profound consequences for manufacturing might mean for their constituencies and their own chances of winning at the next election.

“Trading Oxford West for a shot at Hartlepool”, as George Osborne put it, might end up having profound consequences for the party.

And this is the Brexit dilemma this election.

The division revealed by the 2016 referendum was one of values rather than economic interests.

Formulating policies to appeal to an identity-based tribe containing people with very different such interests was never going to be easy.

And this is the challenge the Prime Minister will face if his electoral strategy proves successful enough to generate a governing dilemma.

By Professor Anand Menon, Director of the UK in a Changing Europe. This piece originally appeared of the King’s College London Policy Institute website.