Trump as Brexit Britain’s BFF? remember: for him talk is cheap 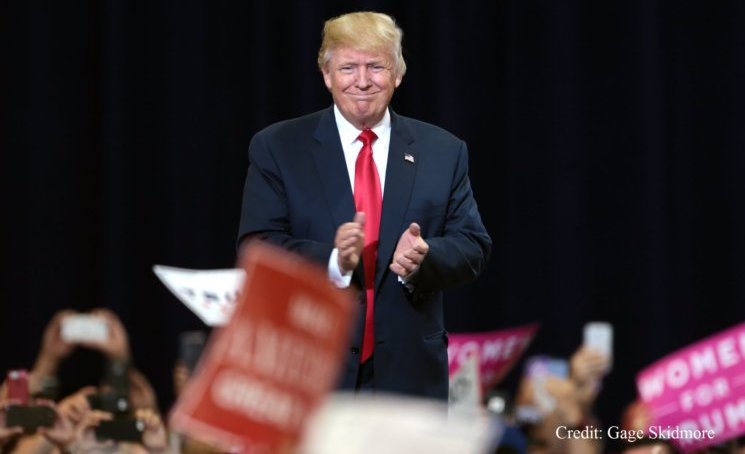 Donald Trump was elected to bring change. In one way at least he is a cert to deliver: for as long as he serves, the world will never want for a presidential opinion on a controversial topic.

On January 16 The Times published a pre-inauguration interview with the president-elect, carried out by former Cabinet minister and Leave supporter Michael Gove alongside a journalist from the German newspaper Bild. In it, Trump was asked for his views on the EU and Britain’s vote to leave it. For a standard-issue American leader in waiting, that would be the cue for a diplomatic statement to the effect that the United States respected the will of the British people, but was keen that the next steps should take care not jeopardise the stability of European and transatlantic institutions. But Donald Trump is not that type of leader.

“You look at the European Union and it’s Germany. Basically a vehicle for Germany. That’s why I thought the UK was so smart in getting out,” he said. He criticised German chancellor Angela Merkel, who must seek re-election this year, for the “catastrophic mistake” of “taking all of these illegals, you know taking all of the people from wherever they come from. And nobody even knows where they come from.” This had been instrumental in pushing British voters towards Leave, he opined: “People, countries, want their own identity and the UK wanted its own identity. But I do believe this: if they hadn’t been forced to take in all of the refugees, so many, with all the problems that it … entails, I think that you wouldn’t have a Brexit.”  As so often with Trump, the ambient sound of smashing diplomatic china pervaded the piece.

The main event, however, for those seeking optimistic talking points on the UK’s post-Brexit trajectory, was that Trump issued positive noises regarding the negotiation of a new US-UK trade deal. Asked if he would pursue such negotiations with speed, he replied: “Absolutely, very quickly. I’m a big fan of the UK. We’re gonna work very hard to get it done quickly and done properly. Good for both sides.”

This prompted a predictable burst of glee in pro-Brexit circles. Jonathan Aitken, writing in the Daily Mail, was perhaps most uncontained in his joy, proclaiming that “Donald Trump will be our number one ally – and Brexit will be our bond”, but he was far from alone in the sentiment. This was accompanied by warnings from more liberal publications that any trade deal proffered by Trump would be dictated on US terms, and no substitute for access to European markets.

But whether the optimists or pessimists are correct in their prognostications, this episode served to highlight a critical flaw common to many of those who have recently taken up the task of Trump-watching. They commit a basic error in assuming that (a) when it comes to policy issues, Trump knows what he is talking about, and therefore is aware of the implications of what he is says, and (b) that he considers any views he places on the public record as constraining his future actions in any way.

The mistake is understandable: these have been reasonable suppositions to make regarding previous presidents. They would have been so if any other candidate had won the election. But in Trump’s case, they are not a sound basis on which to proceed.

In the course of this interview alone, Trump expressed views on, among other things, international trade, EU politics and institutions, refugee policy in Germany, the NATO alliance (which he referred to as “obsolete”), and the adequacy of nuclear weapons stockpiles. The most salient point to register is not whether any particular statements by Trump on these issues are correct or incorrect, or whether his position is helpful or unhelpful to the UK Government. It’s that even a minimally thorough scan of Trump’s actual words makes it immediately apparent that he knows almost nothing about any of these issues.

This is not in itself a crime. Presidents come to office from varying backgrounds, and even those who do have deep expertise and experience in some policy areas cannot have it in all. However they conventionally manage this lack of comprehensive knowledge in two ways. One is by being rapacious consumers of briefings, prepared by expert staff, on the fundamentals of any issue they expect to be called on to discuss. The other is by, when faced with questions on a topic for which they have not prepared, executing a graceful side-step, or issuing a bland holding statement that will minimise the risk of controversy.

Donald Trump does neither. Having never served in elected office or any other public service role before now, he starts with a lower base of policy knowledge, in every area, than any predecessor. But he is also notoriously resistant to reading policy papers or submitting himself to in-person briefings, meaning that his level has not increased at anything like the usual rate during the campaign or the interval between election and inauguration. Yet this does not lead him to be more bland or evasive when interviewed by journalists. Instead he is far more inclined to offer a strong opinion on policy matters than any previous president.

A normal president asked to comment on the prospects for a US-UK trade deal after Brexit would know that a good answer, which he could later stand up, would need to be based on extensive knowledge of current trade arrangements, US and EU trade law, the views of the Congressional majority, and the wider implications for US relations with the rest of Europe. Donald Trump does not have that knowledge.

A normal president would solicit briefings from relevant government officials before answering, or steer clear of making any statement at all. Trump, based on an impressionistic grasp that warm words about Brexit and a trade deal are what his interviewer and the proprietor (Rupert Murdoch) who sent him would want to hear, simply dived in, offering statements of support as emphatic as they were vague. This is a pattern that plays out across the board when Trump discusses policy. He knows a vanishingly small amount about NATO, the European Union, etc. – but he is willing, regardless, to toss together a news-worthy word salad on demand.

The key points to remember for observers are these: First, do not assume, as one would with a normal president, that any view Trump expresses on any topic – however emphatic it may appear – reflects a considered, stable position. His level of knowledge and preparation on the issues is simply too low for him to have reasoned, settled views on policy matters. If it sounds, on camera and in transcripts, as though these are the words of an inarticulate man, asked about something he doesn’t know about, speaking off the top of his head – that is because that is precisely what they are.

Second, do not assume that because Trump has said something on the record, he will consider this to constrain his future actions in the slightest. One reason he is so unusually carefree for a politician when it comes to expressing opinions on the record is that he is entirely comfortable simply ignoring what he has said before if it is inconvenient. This often takes the form not of any sophisticated strategy of retrospective reinterpretation, but simple flat denials that the past statements even took place, even if those statements were recorded on video.

To illustrate the point, let us take a final detour to the domestic front. The biggest legislative issue currently unfolding in the United States is the Republican effort to repeal the Affordable Care Act (‘Obamacare’) and replace it with a less generous health insurance regime. Trump has been a disruptive, erratic presence in this national conversation, simultaneously supporting Republican plans but also saying there will be ‘insurance for everybody’. But only the very naive would consider the latter being a meaningful pledge. The primary drivers of Trump’s lack of consistency is that he simply doesn’t understand the policy issues or the machinery of government. This leads him to say things that will in due course prove irreconcilable with reality.

So consider this: Donald Trump is the kind of leader that is willing to offer promises that cannot be kept to his own voters about their future access to essential healthcare, based on a combination of his failure to grasp the policy issues and a breezy assumption he can ignore his own words later. In light of that, how much weight would you advise British politicians to place on off-the-cuff reassurances he provides in interviews with foreign press?