Trump is visiting a country as divided as his own. His visit won’t help 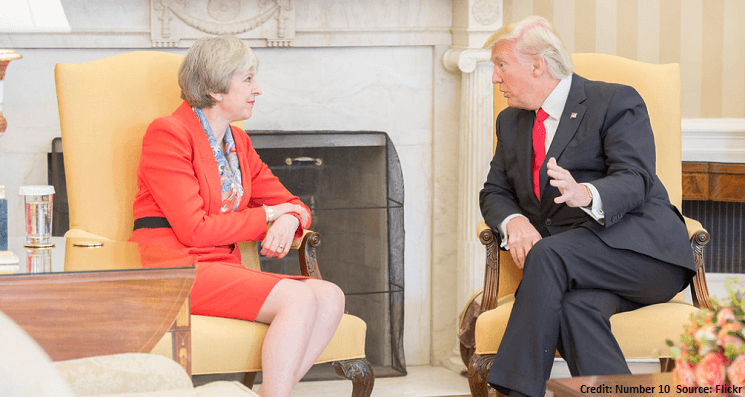 Just after President Trump took office, in February 2017, Theresa May rushed across the Atlantic to stand next to him and reaffirm the specialness of the US-UK relationship.

As political theatre, it went pretty much to plan: she celebrated Trump’s victory as “dawn breaking on a new era of American renewal” and invited him on a state visit to meet the Queen. The president declared that Brexit was a fine idea, and that a great new trade deal between the US and UK was a high priority. At one point they held hands.

It all seems like rather a long time ago.

This week President Trump will finally take up the invitation extended that day, flying in mere days before May’s scheduled departure as leader of the Conservative Party on June 7th.

For his part, Trump has dispelled any hopes optimists might have harboured that in power he would pivot to a more unifying political strategy. On the contrary: his term thus far has been defined by a near-constant stream of ‘culture war’ rows between progressives and conservative nationalists, stoked by the president’s penchant for intemperate public tirades, provocative tweets and conservative judicial appointees.

It seems quaint now to recall a time when some boosterish words on trade or special-relationship pleasantries seemed like meaningful weights in the scales when it came to the success of Brexit, the geopolitical standing of the UK, or the political regard in which the prime minister was held. We are rather past all that now.

When it comes to a trade agreement, British reporters have – one would hope – caught up with their American counterparts in learning to discount verbal promises from President Trump about future agreements or legislation.

Given the complexity of trade deals, the requirement that they be approved by Congress, and the incoherence of the president and his party on the issue, a speedy new deal was always implausible. Such promises are even less in the president’s gift now, since the House of Representatives was taken into Democratic Party control in 2018 midterm elections.

As for the UK’s standing in the world, it remains true – as it has been for decades – that close security, intelligence and military cooperation with the US is core to British strategy and identity. This may give rise to one piece of hard business during the president’s visit: the US was displeased by news that the British government might allow the Chinese telecoms corporation Huawei – considered by many observers to be too close to state intelligence services – to play a role in building the UK’s 5G network. If he listens to national security hawks in his administration, Trump may seek to use the leverage of intelligence-sharing to twist the PM’s arm into reconsidering.

However, given the scale of the damage done to the UK’s international reputation by the chaotically managed execution of Brexit negotiations (if not by Brexit in itself), this sort of basic maintenance work on the US-UK axis is at best a welcome momentary distraction from the existential challenge facing Britain’s status as a serious world power.

So much for what a visit from President Trump at this time cannot do. What it will do is provide a temporary focus for the animosities of an ever-more-deeply polarised British society.

Even if he exercises maximum restraint and does no more than meet the Queen and issue bromides about the importance of the special relationship, by this point in his political arc the president is a lightning rod for rancour whether he solicits it or not.

The leaders of the Labour and Liberal Democrat parties have both announced they will boycott the state banquet thrown for Trump, on the grounds that his record of racist, misogynist and xenophobic statements, and his illiberal policies, make him unworthy of the honour.

Thousands of members of the public have advertised plans to protest in the streets on the same grounds. Plans for a speech at Parliament were dropped after opposition from the Speaker. As in his own divided country, Trump provides a highly-motivating focus for liberals and social democrats who viscerally oppose the style and substance of the politics he represents.

Restraint on the president’s part is far from assured, however. Since well before his own election, Trump has been open about feeling a strong affinity with the Brexit cause, especially its most polarising populist faces. In their against-the-odds triumph in summer 2016 he saw a foreshadowing of his own victory, and he was encouraged to do so by his former campaign manager and political strategist, Steve Bannon, who has spent the years since cultivating ties with hard-right parties across Europe (not altogether successfully).

Trump has met before with Nigel Farage and Boris Johnson, the Brexit movement’s most recognisable avatars outside and within the major party system, describing them as “friends” and “good guys”. He has not ruled out meeting with one or both during this visit, which would be a breach of protocol but one entirely in keeping with his brand.

Whether or not he goes so far as such a signal of tacit support for individual politicians, it seems unlikely the president will get through his visit without saying or doing something that makes clear – possibly in colourful terms – his sympathy both with Brexit and with the populist-nationalist forces on the right it has empowered.

This will delight them and enrage those protesting Trump’s presence. In doing so it will leave those not committed to either camp lamenting the president’s ability to transfuse into the politics of others the dark energy with which he has long exacerbated his own country’s division.

The US and UK have one of the longest and most stable bilateral relationships in the world, with a basis in interests and day-to-day cooperation that make it very hard to deprioritise or disrupt. It will take more than one abrasive president or one fraught state visit to damage that.

But the polarisation of both American and British politics is such that, in the years to come, the warmth of relations may be shaped more than previously by whether leaders of similar political stripes coincide. Were they to win power, it would be fiercely difficult for the present Labour or Lib Dem leadership to forge a cordial relationship with the Trump administration.

Likewise, the prospect of a Prime Minister Boris Johnson – or a figure further to the right – seeking to sustain the ritual of proclaiming special closeness when dealing with a progressive Democratic counterpart such as Bernie Sanders or Elizabeth Warren – or their analogues at some later point in our respective national trajectories – would test the skills of both sides’ diplomats.

All of which is to say: things may seem fraught now, and they are. But the tests to which the special relationship is subjected may get tougher yet in the years ahead.