Truss should be concerned about struggling businesses rather than WTO complaints 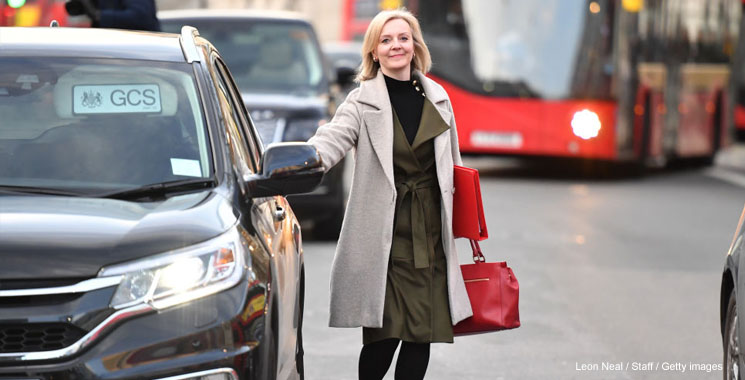 In a letter to cabinet colleagues last week, she has reportedly raised concerns that the UK will not be operating a World Trade Organization (WTO) compliant border when we leave the EU.

It was an embarrassing revelation, particularly coming on the same day as the UK was nominating her predecessor, Liam Fox, as the man to lead the WTO into a new era.

Truss joined an array of business groups in the UK, as well as the Scottish and Welsh governments and the Northern Ireland Assembly, who have argued Britain needs more time: either to seek an extension to the transition period, or to seek an adjustment period once transition ends to allow business to get ready.

On 1 July, the UK lost its right to ask for an extension to the transition period, under the terms of the withdrawal agreement with the EU.

It might be able to engineer more time at a later point, but that is more risky legally and will depend on a heap of EU goodwill.

For now, the only basis on which to plan is that we need to be ready on 31 December at 11pm to complete the process of Brexit, deal or no deal.

The immediate crunch is that this means government and business need to be ready to operate on two new borders: a border with the EU27 across the Channel, and a border between Great Britain and Northern Ireland.

The shape of the Irish sea border is clearer. The text was agreed last October. But the UK government initially refused to acknowledge the political inconvenience of what it had actually conceded, impeding proper preparation.

The government is gradually admitting what was in the small print when it signed up to the deal: there will be customs forms, there will be border inspection posts.

But there are big issues outstanding. Two weeks ago, Michel Barnier told the House of Lords EU committee that detail in key areas was still lacking. It was a long list: customs, tax, VAT, duty, sanitary and phytosanitary arrangements, and fisheries.

The thing Truss is most worried about is the readiness of the dual tariff regime; designed to allow Northern Ireland to stay behind the EU external customs border but remain part of the UK customs territory and benefit from new trade deals that may be negotiated. That promise was important to unionists in Northern Ireland.

The depth of the Irish sea border also depends on the UK-EU deal. But even if the EU simply signed on the dotted line of the UK’s draft texts, businesses trading with the EU or Northern Ireland will have to be ready for big changes.

On Monday we will find out the detail of the UK’s “border operating model”, but we know now that the EU will treat the UK as a third country with new checks, forms and bureaucracy.

The negotiations will determine how intrusive they are and whether there are tariffs on top. Whatever happens, it will be very different.

Some businesses will already be preparing; others will have pushed it down the to-do list as they struggle with Covid-19.

Expect a “Get ready for Brexit – this time it’s for real” campaign soon to persuade businesses who sensibly banked on a transition last year that they can’t put it off any longer.

Meanwhile, the UK government has already admitted that it won’t be able to operate a fully functioning border between Great Britain and the EU on 1 January (not a luxury it has for the Great Britain-Northern Ireland border).

Instead changes will be phased in, so only this time next year, 1 July 2021, will it be fully operational.

Truss is worried that before then, by waving EU imports through, we will face complaints in the WTO. There may be reputational damage, but the WTO will not act fast and by the time it does, we should have a functioning border up and running.

She should be more worried that many of the businesses she wants to benefit from her new trade deals beyond the EU will instead be struggling to cope with the disruption they face in maintaining trade with the UK’s biggest export market.

By Jill Rutter, senior research fellow at UK in a Changing Europe. This piece was originally published by The Guardian.